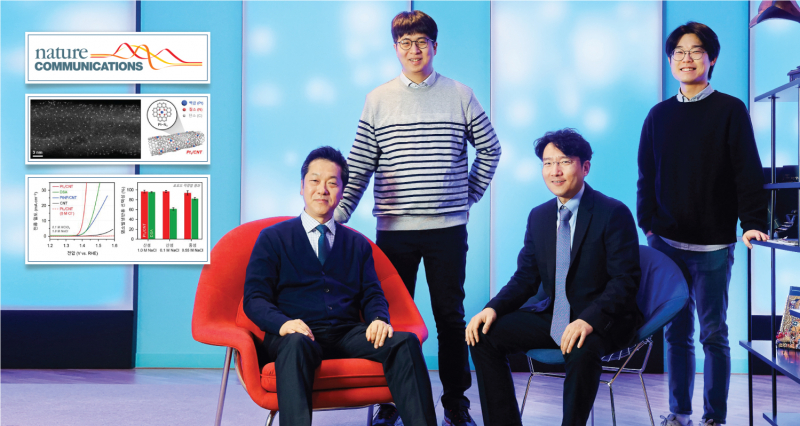 Their findings have been published in Nature Communications on January 2, 2020.

Chlorine (Cl₂) is one of the most widely used industrial chemicals in the world today, with 75 million tons produced annually. A team of researchers, affiliated with UNIST has recently found a way to make the manufacture of chlorine more efficient and affordable. This is expected to be of great help to chlorine-related industries.

A joint research team, led by Professor Sang Hoon Joo and Professor Sang Kyu Kwak in the School of Energy and Chemical Engineering at UNIST has unveiled a novel catalyst (Pt1/CNT) for electrochemical chlorine generation.

The existing electrochemical catalysts for chlorine generation contain a large amount of precious metals, such as ruthenium (Ru) and iridium (Ir), thus are expensive and not very efficient in terms of production. Besides, in the condition of low chlorine concentration and a pH-neutral environment, not only chlorine but also oxygen are generated and this reduces the overall chlorine production efficiency. The research team developed a non-metal oxide based on a conclusion that the cause of such drawbacks are rooted in the intrinsic properties of “metal oxide-based catalysts.”

The newly-developed catalyst (Pt₁/CNT) is a monatomic dispersion catalyst, in which platinum (Pt) atoms that are surrounded by four nitrogen (N) atoms, are dispersed on carbon nanotubes (CNT). Since the catalyst is completely exposed on the surface of the metal atoms (Pt), even with the small amount, it can give a high efficiency and show a better performance than the existing commercial DSA catalysts under various electrolyte conditions. In addition, it contained high chlorine ions, such as seawater, or vice versa. It will be shown to be applied to electrochemical water treatment equipment in various environments in the future.

“It has been confirmed that only chlorine ions were selectively adsorbed on the active sites of Pt1/CNT, while other additional reactions were suppressed,” says Taejung Lim in the Department of Chemical Engineering at UNIST, the first author of the study. “This will serve as a new catalyst, which overcomes the fundamental disadvantage of the existing metal oxide catalysts.”

In the study, Professor Kwak and Dr. Gwan Yeong Jung applied their experimental data to the theoretical calculations to examine the structure of active sites and the principle of electrochemical reactions. They found that the improved structural integrity between the active sites and carbon nanotubes result in smoother electron transmission and a marked improvement in the catalytic performance.

“Through molecular modelling and density functional caluations, we have idenfitied the central structure of active sites in Pt1/CNT,” says Professor Kwak. “This calculation principle is expected to contribute to the interpretation of the reactivity and reaction principles of various monoatomic catalysts in the future.”

“The monoatomic catalyst developed this time is a new catalyst design concept that changes the paradigm of the noble metal oxide catalyst commercialized 50 years ago,” says Professor Joo. “In particular, the new catalyst is not affected by the composition of the electrolyte, thus is expected to be used in a variety of applications, such as medium and small-scale water treatment, as well as ballast water treatment.”

The results of their research have been published in the online version of Nature Communications on January 21, 2020. This study has been supported by the National Research Foundation (NRF) of Korea funded by Ministry of Science and ICT (MSIT).