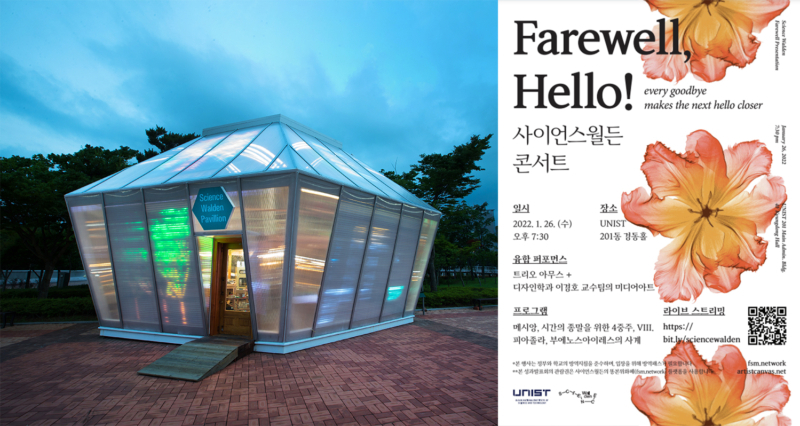 A special art-science concert, dubbed 'Farewell, Hello!' is scheduled to be held at UNIST on January 26, 2022.

A new art-science concert by Science Walden Center is scheduled to be held at UNIST on Wednesday, January 26, 2022. The purpose of this event is to commemorate the end of the Science Walden projects. The concert will be held at Kyungdong Hall, located on the 4F of Main Administration Building at UNIST. Those who wish to participate in the event can make reservations through the fSM (feces Standard Money) platform (http://fsm.network/).

Held by Science Walden Center, the purpose of this event is to commemorate the completion of its seven-year-long research project. The concert, dubbed ‘Farewell, Hello!’ has been jointly organized by Professor JongEun Lee (School of Liberal Arts), Professor Kyungho Lee (Department of Design), and the Science Walden research team.

The concert features the piano trio (piano, violin, and cello), which is performed by Professor JongEun Lee’s team (Trio Amus). It will be, then, visualized via media arts by Professor Kyungho Lee.

Due to the continued number of confirmed COVID-19 cases within South Korea, there will be a limited seating capacity of 80 seats. The performance has been operated in compliance with COVID-19 guidelines. Those who wish to attend may purchase tickets with the fSM currency, called Ggool (literally meaning ‘honey’ in Korean). The cost of each ticket is 10 Ggool. The concert will begin at 7:30 pm.

The concert will be also streamed, via live video, on YouTube, so that those who were unable to participate can also watch it at home. The concert poster has been designed by Professor Kyungho Lee. The x-ray images of flowers on the poster contain the meaning of paying a tribute to those hard-working researchers who have taken part in the Science Walden projects over the past seven years.