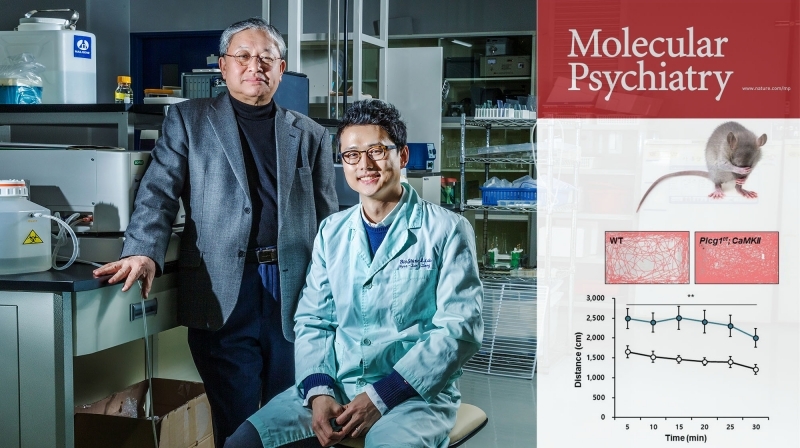 Their findings published in the recent issue of the journal Molecular Psychiatry.

A team of researchers, affiliated with UNIST has made a significant breakthrough in the search for the potential root causes of bipolar disorder.

The research team, led by Professor Pann-Ghill Suh of Life Sciences at UNIST conducted a study that suggests the cellular protein Phospholipase Cγ1 (PLCγ1) could be a new promising candidate gene for bipolar disorder, also known as manic-depressive illness.

The research published by the journal Molecular Psychiatry outlines the findings on January 31, 2017. The findings provide evidence that PLCγ1 is critical for synaptic function and plasticity and that the loss of PLCγ1 from the forebrain results in manic-like behavior. This breakthrough is expected to be widely used in research for the treatment ofthe manic symptoms associated with bipolar disorder.

The PLCγ1 has once been proposed as a candidate gene for bipolar disorder in previous studies. However, it has been unclear that how the PLCγ1 plays a role in neron-to-neuron signaling and how it is related to mental illnesses, like bipolar disorder.

In the study, Professor Suh and his team created forebrain-specific PLCγ1-deficient mice and observed what happened in the brain synapse of this mouse. Synapse is the part of the neuron where the signal is transmitted from the end.

To test whether dysfunction of PLCγ1 in the brain contributes to development of neuropsychiatric disorders, the research team generated mouse models, lacking PLCγ1 in the forebrain and studied the synaptic and neuronal changes in mouse models.

The research team reported that mice with forebrain-selective deletion of PLCγ1 also exhibit manic-like behavior, as well as deficits in inhibitory transmission and BDNF-dependent synaptic plasticity.

This resulted in the imbalance between excitatory and inhibitory synaptic transmission in forebrain circuits, leading to behavioral abnormalities and manic episodes of bipolar disorder. These symptoms were alleviated after the drug treatment for bipolar disorder was given.

“In the brain, excitatory synapses and inhibitory synapses work together to remain balanced for proper neurotransmission,” says Professor Suh. “Our study demonstrated that the imbalance between these two is a major cause of various neuropsychiatric disorders and the GABAergic dysfunction observed in the hippocampi of bipolar disorder patients.”

“After 10 years of research, we have finally revealed PLCγ1 protein plays a major role in the onset of bipolar disorder,” says Professor Suh. “Our findings, therefore, provide evidence that PLCγ1 is critical for synaptic function and plasticity and that the loss of PLCγ1 from the forebrain results in manic-like behavior.”

The research was carried out with the support of the future creation science department and the Korea Research Foundation.