Their findings have been published in Science on November 11, 2019.

Adding a small amount of other metals to iron that is soft and rusts easily, could result in sturdy and rust resistant stainless steel. Likewise, a technology has been developed to capture the shortcomings of peroveskite. The commercialization of perovskite solar cells, which have been attracted much attention as the next-generation solar cells, could be accelerated.

A research team, led by Distinguished Professor Sang Il Seok in the School of Energy and Chemical Engineering at UNIST, has engineered the light-absorbing layer material with the new composition of perovskite material and applied it to the solar cell. By simply changing their additives, the new material has significantly increased both efficiency and stability of the existing perovskite solar cells.

Perovskite solar cells are made of a mixture of organic molecules and inorganic elements within a single crystalline structure that is inexpensive and easy to produce in the lab via low-temperature solution process. For this reason, PSCs have emerged as a promising candidate for the next generation solar technology, following silicon-based solar cells.

The core to solar cells is the photoactive layer, which absorbs sunlight directly to generate electric current. Thus, how strong and stable (durability) this layer gets and how efficiently it converts light into electricity are what determines the commercialization. With the perovskite solar cells, a material having a perovskite crystal structure is used as the photoactive layer, thus enhancing the efficiency and stability of this layer is an eminently important task for commercialization.

Professor Seok and his team added divalent organic cations (i.e., methylenediammonium, MDA) in place of Br and MA. Those new additives stabilize the crystal structure and maintain its efficiency, which simultaneously captures the stability and efficiency of the photoactive layer. 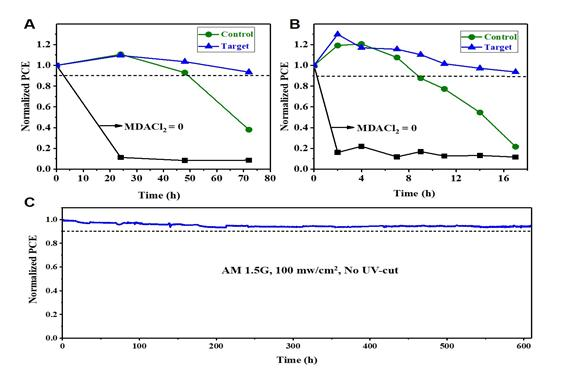 “This study led to a good result of attempting to break the stereotype that the material added mainly for the durability of the perovskite material was a monovalent cation,” says Hanul Min in the Combined M.S/Ph.D. of Energy and Chemical Engineering at UNIST, the first author of the study. “The efficiency of the perovskite containing the divalent organic cation was 23.7%, and it operated more than 90% stably even after 600 hours of operation in an environment in which sunlight was radiated.”

This study broadens the solar-light absorption wavelength band with new composition that is completely different from the existing ones. This has greatly improved humidity-, thermal-, and photostability performances, while increasing photocurrent density to the world’s highest.

This research has been carried out through the support of the National Research Foundation of Korea (NRF) funded by the Korean government (MSIT), the Global Frontier R&D Program on Centre for Multiscale Energy System, and by the U-K Brand research fund.