Home All News Research Highly Efficient, Stable Perovskite Material that Can Be Installed on Exterior Walls and Vehicle Sunroofs! 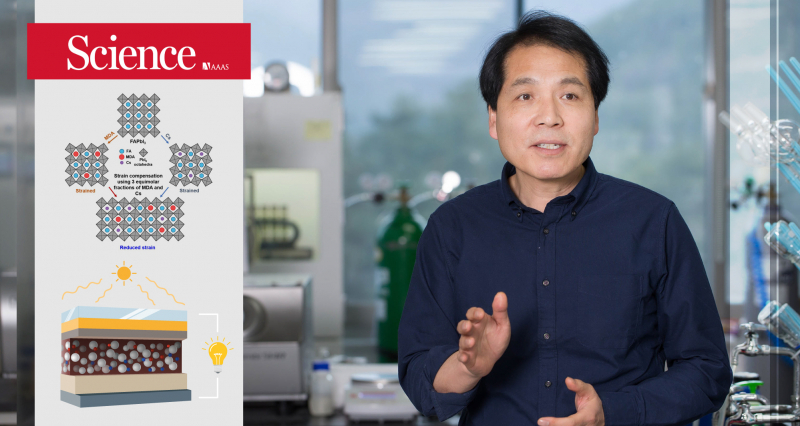 A research team, led by Distinguished Professor Sang Il Seok in the School of Energy and Chemical Engineering at UNIST, has demonstrated that the efficiency and stability of PSCs can be enhanced by minimizing the deformation for the microstructure of photoactive layer in the PSC device.

Highly Efficient, Stable Perovskite Material that Can Be Installed on Exterior Walls and Vehicle Sunroofs!

Their findings have been published in the October 2020 issue of Science.

With the help of advances in perovskite solar cells (PSCs), it will not be long before we see power-generating building facades or car sunroofs. This is largely due to a recent study that could further improve both the efficiency and the stability of PSCs.

A research team, led by Distinguished Professor Sang Il Seok in the School of Energy and Chemical Engineering at UNIST, has demonstrated that the efficiency and stability of PSCs can be enhanced by minimizing the deformation for the microstructure of photoactive layer in the PSC device. Using this material, Distinguished Professor Seok has set a new world-record efficiency performance for PSCs at 25.17 %. Published in the October 2020 issue of Science, their findings have attracted attention as a method to further improve both the efficiency and stability of PSCs.

Unlike the existing sillicon-based solar cells, PSCs have the advantages of turning any surface into a solar cell–from buildings to even vehicles. Besides, they are made of a mixture of organic molecules and inorganic elements within a single crystalline structure that is inexpensive and easy to produce in the lab via low-temperature solution process. For this reason, PSCs have emerged as a promising candidate for the next generation solar technology, following silicon-based solar cells.

Figure 1. The inner structure of the newly-developed photoactive layer, as well as the working principle of PSCs.

At present, the main duty for the commercialization of PSCs is to produce a promising photoactive layer that exhibits higher power conversion efficiency (PCE) and better long term stability. Photoactive layers used in solar cells play an important role in converting solar energy into electrical energy. Upon light exposure, these layers generate electric charge and send them to electrodes. In this case, the greater the amount of deformation (i.e., vacancies) within the microstructure of a photoactive layer, the poor the charge transfer efficiency becomes. This is because the extracted electric charges disappear when defects are formed.

In their study, the research team improved the chemical stability of PSCs by changing the type and ratio of ions, constituting the photoactive layer of PSCs, thereby minimizing the internal defects. The newly-developed perovskite material has not only shown impressive gains in power conversion efficiency, but also exhibit greatly enhanced structural stability. Through this, the researchers were able to obtain a perovskite solar cell with a high efficiency of 25.17 % ( 24.44% certified efficiency).

Meanwhile, Distinguished Professor Seok’s team is known for being the world-leading experts in the field of perovskite solar cells. They broke the 20% efficiency barrier for perovskite solar cells for the first time in history, thus have updated the record four times. Besides, he has published six papers on perovskite solar cells in the journal, Science. In particular, one of his research that has set a new world-record efficiency performance for PSCs via Intramolecular Exchange and Iodide Management, has been the most highly-cited paper among all scientific journals published in Science, so far.

This study has been supported by the National Research Foundation of Korea (NRF) funded by the Korean government (MSIP), the Global Frontier R&D Program of the Center for Multiscale Energy System, and by the Climate Change Program.