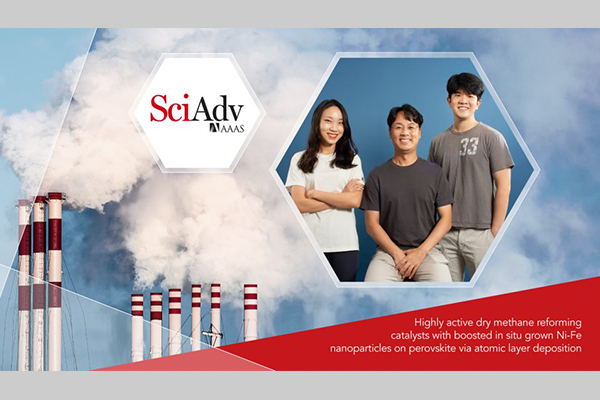 A research team, led by Professor Gun-Tae Kim in the School of Energy and Chemical Engineering at UNIST has developed a new nanocatalyst that recycles major greenhouse gases, such as carbon dioxide (CO2) and methane (CH4), into highly value-added hydrogen (H2) gas.

Their findings have been published in Science Advances on August 26, 2020.

A new nanocatalyst that recycles major greenhouse gases, such as carbon dioxide (CO2) and methane (CH4), into highly value-added hydrogen (H2) gas has been developed. This catalyst is expected to greatly contribute to the development of various waste-to-energy conversion technologies,  as it has more than twice the conversion efficiency from CH4 to H2, compared to the conventional electrode catalysts.

A research team, led by Professor Gun-Tae Kim in the School of Energy and Chemical Engineering at UNIST has developed a novel method to enhance the performance and stability of catalysts, used in the reaction (i.e., dry reforming of methane, DRM) that produces H2 and carbon monoxide (CO) from well-known greenhouse gases, such as CO2 and CH4.

The conventional catalysts used for the dry reforming of methane (DRM) are nickel (Ni)-based metal complexes. Over time, however, the performance of catalysts degrade, so does the catalyst lifetime. This is because carbon accumulates on the surface of the catalysts, as the catalysts clump together or their reaction is repeated at a higher temperature.

Figure. 1 Schematic comparison, SEM images, the correlation between the number of ALD cycles and the particle size/population, and x-ray photoelectron curves for the samples. (A) Conventional exsolution for LSTN and (B) corresponding SEM image of LSTN. Scale bar, 500 nm. (C) Topotactic exsolution via ALD for LSTN-20C-Fe and the corresponding SEM image of (D) LSTN-20C-Fe after reduction. Scale bar, 500 nm.

The research team also onfirmed that exsolution is promoted even with a very small amount of ALD-deposited Fe oxide (Fe2O3). “Notably, at 20 cycles of Fe oxide deposition via ALD, the particle population reaches over 400 particles (Ni-Fe alloys),” says Arim Seong (Combined MS/PhD in the School of Energy and Chemical Engineering, UNIST), the first co-author of the study. “As these particles are composed of Ni and Fe, they also exhibited high catalytic activity.” 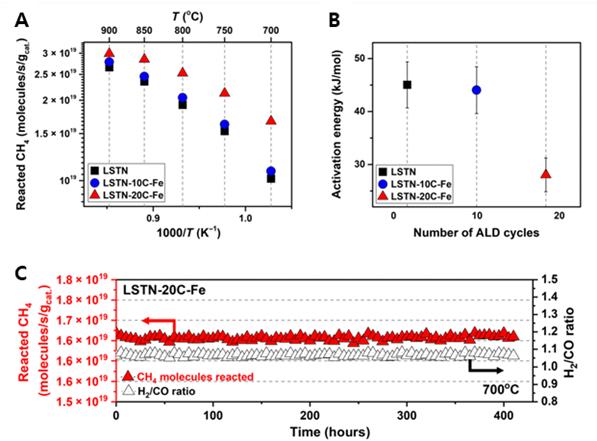 The new catalyst exhibited high catalytic activity for the DRM process with no observable degradation in performance for more than 410 hours of continuous operation. Their results also showed a high methane conversion (over 70%) at 700 ºC. “This is more than twice the power conversion efficiency that of the conventional electrode catalysts,” noted Professor Kim. “Overall, the abundant alloy nanocatalysts via ALD mark an important step forward in the evolution of exsolution and its application to the field of energy utilization.”

The findings of this research have been published in Science Advances, a sister journal of Science on August 26, 2020. This study has been jointly participated by Professor Jeong Woo Han from POSTECH, Professor John M. Vohs and Professor Raymond J. Gorte from University of Pennsylvania, USA.