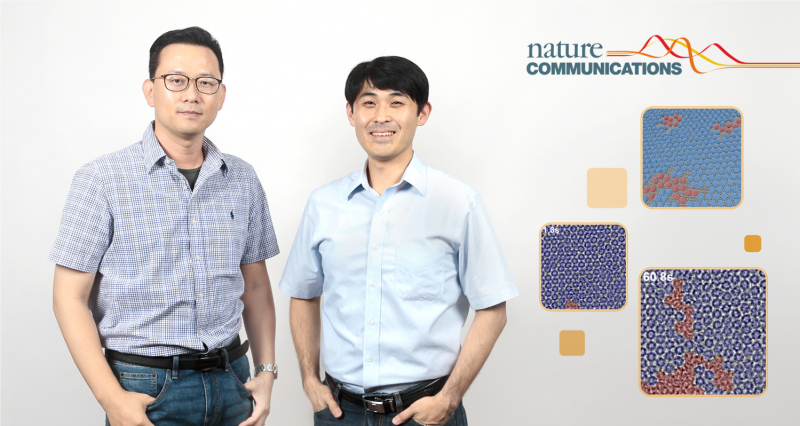 Their findings have been published in Nature Communications September 27, 2019.

A team of researchers, affiliated with UNIST has succeeded in providing real-time visualization of the molecular changes from a solid to a liquid.

This breakthrough has been led by Professor Chae Un Kim and his research team in the Department of Physics at UNIST, in collaboration with Professor Kwanpyo Kim (Department of Physics) from the IBS Center for Nanomedicine, within Yonsei University. In their study, the research team has presented a new method of observing the solid-to-liquid phase transition of fullerene molecules on graphene at the single-molecular level.

Phase transition is a phenomenon in which a substance changes from one phase to another depending on certain external conditions, such as temperature, pressure, and exterior magnetic field. There exist various experimental constraints for the observation of such phase transitions at the single-atom or single-molecule level. In particular, direct imaging of individual atoms or molecules in a disordered state is quite challenging.

In the study, the research team prepared a model molecular system of fullerene molecules on graphene and  directly visualize the structural and dynamical evolution, using aberration-corrected transmission electron microscopy. Fullerenes have relatively high robustness to e-beam under TEM imaging conditions compared to other organic molecules and can serve as model molecules. Graphene supports the fullerene molecules in the liquid state and minimizes any miscellaneous signals that can be a problem during electron microscopy.

“Traditionally, phase transition has been studied indirectly via computer simulations or model experiments, using large particles, like a grain of sand,” says Professor Kwanpyo Kim (IBS Center for Nanomedicine, Yonsei University). “The solid–liquid phase change phenomenon is an important process to determine various reactions of nanomaterials. Thus, it is expected to be applied to research on the melting reaction of nanoparticles such as the body absorption process of medicines.”

The findings of this research have been published in Nature Communications (IF 11.878) on September 27, 2019.