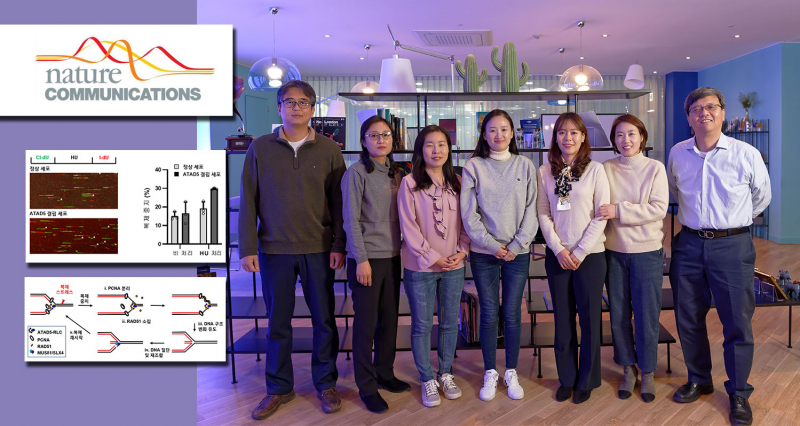 This study has been led by Director Kyungjae Myung and Dr. Kyoo-young Lee, a research group at the Center for Genomic Integrity within the Institute for Basic Science (IBS) at UNIST.

The work by Distinguished Professor Kyungjae Myung's team has been published in Nature Communications.

DNA stores all of the information necessary for life phenomena, and a cell transmits its own genetic information to two daughter cells through DNA replication and cell division. Replication stress can be caused by extracellular and intracellular sources during DNA replication, which leads to slowed or stalled replication. If cells do not properly cope with such risks, chromosome break and rearrangement will occur, resulting in genomic instability. That helps explain why replication stress is one of the major contributors to cancer development.

Although many DNA repair proteins function to protect and restart stalled replication process under stress condition, it is still unclear how replisome proteins, which are real players in DNA replication, contribute and communicate with those proteins to ensure faithful DNA replication. Led by Director Kyungjae Myung and Dr. Kyoo-young Lee, a research group at the Center for Genomic Integrity within the Institute for Basic Science (IBS) at UNIST revealed that ATAD5 actively deals with replication stress, in addition to its known function to prevent such stressful situations. Though ATAD5 has been known as a tumor suppressor by maintaining genomic stability and suppressing tumorigenesis, it has been unclear whether the replication regulatory protein is also involved in the replication stress response. “We have identified the fundamental mechanism of replication stress control, which is a major cause of cancer. Hopefully our work will contribute to the development of cancer therapy,” explains Director Myung.

▲ Figure 1. In the face of DNA reapplication stress, ATAD5 i) removes PCNA from the stressed DNA and simultaneously ii) recruits RAD51 recombinase through protein-protein interaction. Then iii) RAD51 wraps and transforms the DNA into a stable structure. Subsequently, iv) DNA is cleaved via MUS81/SLX4 and recombined, and v) DNA replication restarts. This process keeps DNA stable under replication stress and ensures entire replication is complete.

In addition, they reported that PCNA unloading by ATAD5 is a prerequisite for efficient RAD51 recruitment. These suggest that a series of processes starting with RAD51 recruitment and leading to structural changes, breakage, and eventual replication restart are regulated by ATAD5. These findings highlight that the role of ATAD5 in maintaining genome stability extends beyond its roles in PCNA unloading during normal DNA replication. Dr. Su Hyung Park, the first author of this study notes, “Mutations in the ATAD5 gene are frequently found in many cancer cells. This study contributes to understating the cause of tumor formation by ATAD5 mutations.”

The findings of this research have been published in Nature Communications on December 16, 2019.