Their findings have been published in Energy & Environmental Science on May 20, 2020.

A new rechargeable battery that can be charged wirelessly using light from indoor sources, like desk lamps has been developed. This will enable the so-called ‘Energy Recycling,’ which refers to the energy recovery process of utilizing indoor lights that would normally be wasted, by converting it into electricity.

A joint research team, led by Professor Hyun-Kon Song (School of Energy and Chemical Engineering) and Professor Tae-Hyuk Kwon (Department of Chemistry) has presented an external-power-free single-structured PRB, named a dye-sensitized photo-rechargeable battery (DSPB) with an outstanding light-to-charge energy efficiency (ηoverall) of 11.5% under the dim light condition. Researchers have also succeeded in demonstrating the ability of the DSPB to operate a temperature-sensing IoT device only by indoor lights, and thus opening the possibility of realizing indoor-light-harvesting PRBs.

“Lighting accounts for about 10% of total commercial sector electricity consumption, and thus we expect that the energy recycling effect of that will be enormous,” says Professor Song. “Our study suggests new research directions for photovoltaic cells with the possibility of using the sun or some other light source.”

Photo-rechargeable batteries (PRBs) can harvest electrical power from indoor light condition with very low illuminance levels. However, these batteries react sensitively to sudden changes in light brightness and this makes it more difficult to provide supply power stably. Up until now, batteries have generally employed capacitive storage rather than battery-type storage. However, the applications for these conventional capacitors are limited by their low energy storage capacity, which is one major challenge hindering its widespread use. 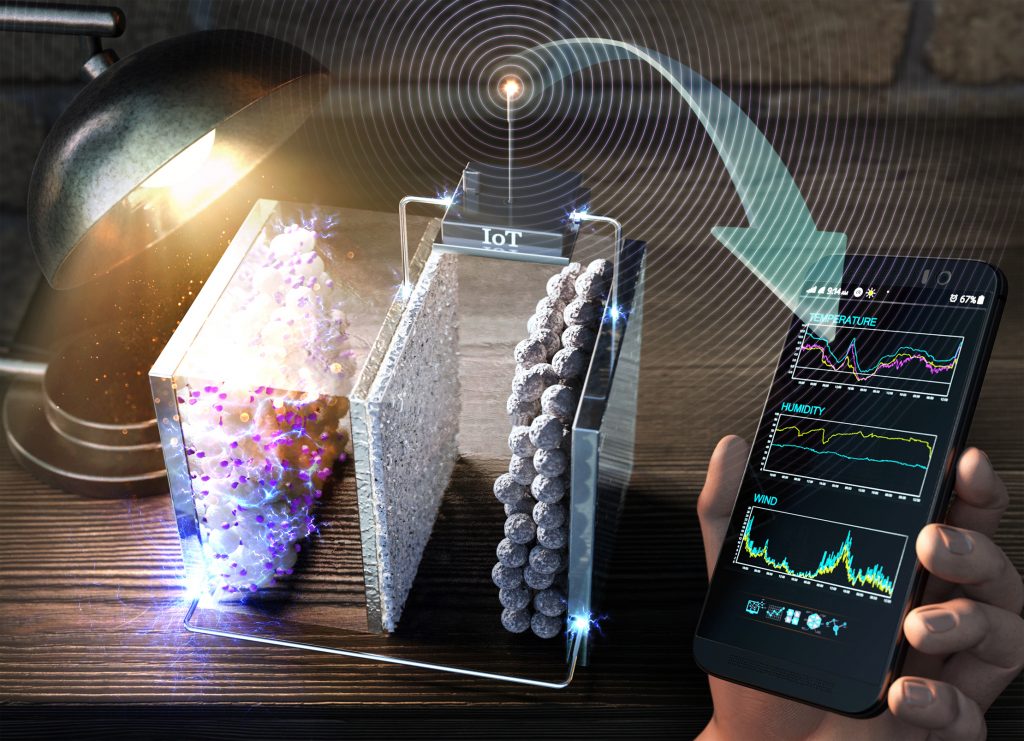 The findings of this research have been published and selected as the back cover of the journal, Energy & Environmental Science (EES) on May 20, 2020.

The joint research team found a way to store more electric energy, which is to use rechargeable batteries, instead of capacitors. Through this, they ironed out the issue concerning the mismatch of the energy levels between the photoelectrode and cathode of existing rechargeable batteries.

“To combine solar cells with rechargeable batteries, electrons generated at the photoelectrode must move stably to the cathode of the rechargeable battery,” says Myeong-Hee Lee in the Doctoral program of Energy and Chemical Engineering at UNIST, the first author of the study. “It is mainly used as the cathode of Li-ion battery, and by injecting carbon into the surface of lithium manganese oxide (LMO) with amphi-redox and using it anode, it was possible to match the energy levels of both systems.” 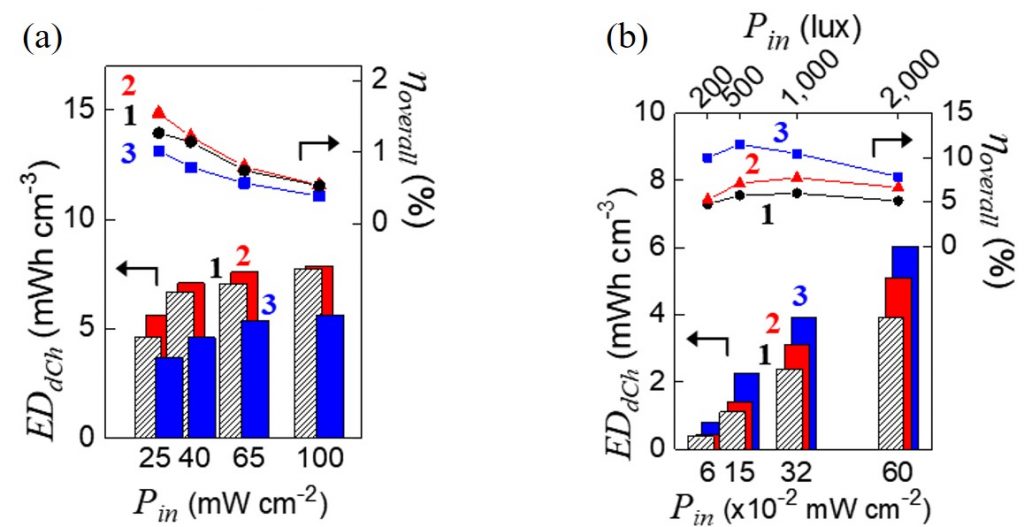 In addition, the researchers also discovered redox mediators that perform extremely well under low light conditions, thereby improving the overall power conversion efficiency considerably. Such mediators are chemical compounds that are made of iodine and copper compounds, and act as electron shuttles between the oxidizing enzyme and target compounds respectively to mitigate the energy-level mismatch between electrodes.

Dye-sensitized solar cells (DSSCs) tend to mimic the photosynthesis process in green plants. That is, when the dye gets light, the process in which a substance loses an electron in a chemical reaction, known as oxidation occurs. And as these electrons move through a wire from the negative end to the positive end, an electric current is generated. The redox mediator plays a role in replenishing electrons lost by the dye, and there appears to be a suitable characteristic that works well under low light intensity.

“At high-power irradiation, the kinetically-fast but thermodynamically-unfavorable iodine mediator (I−/I3−) showed the highest charge and discharge capacities even if its discharge voltage was lowest,” noted the research team. “Under dim-light for indoor applications, however, the thermodynamically-favorable but kinetically-slow copper complex mediator (Cu+/2+(dmp)2) showed energy density and efficiency superior to I−/I3− because its kinetics did not limit the harvesting capacity..”

“The new photo-rechargeable battery exhibits outstanding light-to-charge energy efficiency (ηoverall) of 11.5% under the dim light condition, which I believe is the best in the world,” says Professor Song. “In the study, we have also successfully demonstrated the ability of DSPB by connecting six DSPBs in series to operate a temperature-sensing IoT device only by indoor light for 10 minutes.”

The findings of this research have been published and selected as the back cover of the journal, Energy & Environmental Science (EES) on May 20, 2020. This work has been supported by the National Research Foundation of Korea (NRF), the Korea Institute of Energy Technology Evaluation and Planning, MOTIE, and the 2018 UNIST Research Fund.