A reasearch team, jointly led by Professor Sung-Yeon Jang in the School of Energy and Chemical Engineering at UNIST, in collaboration with Professor Ju-Won Jeon in the Department of Chemistry from Kookmin University, has developd the world’s first ionic thermoelectric (ITE) material with both good elasticity and self-healing abilities.

Their findings have been published online in Energy and Environmental Science on May 15, 2020.

Researchers from UNIST have discovered a novel high-efficiency thermoelectric material that are intrinsically self-healable and highly stretchable. Their findings paved the way for discovery and development of smart clothes that harvest power from human body heat.

A reasearch team, jointly led by Professor Sung-Yeon Jang in the School of Energy and Chemical Engineering at UNIST, in collaboration with Professor Ju-Won Jeon in the Department of Chemistry from Kookmin University, has developd the world’s first ionic thermoelectric (ITE) material with both good elasticity and self-healing abilities. Through the incorporation of self-healing properties in TE materials that generate power directly from the heat, the research team succeeded in synthesizing materials that possess intrinsic flexibility, stretchability, and self-healability all at once.

With the advent of wearable technology products, such as smartwatches and VR glasses, there has been sufficient attention given to the research on thermoelectric generators (TEG) that convert body heat into electricity to power sensors. Thermoelectric generators (TEG) use TE materials, in which heat spontaneously flows when there is a temperature difference. Conventional high-efficiency TE materials are rigid and brittle inorganic materials, such as glasses or ceramics. Because these materials are clearly not so flexible and break easily, the inorganic-based TE materials are also vulnerable to deformation or mechanical strain caused by human motion. Although the organic-based TE materials have the benefits of having good flexibility, they have a low conversion efficiency rate.

Figure 1. Shown above are the photograph of a TE hybrid film during the self-healing and stretching test.

In this work, the joint research team reported an intrinsically self-healable, stretchable, and flexible ITE material, consisting of a conjugated polymer, an anionic polyelectrolyte, and a multivalent acid. According to the research team, the proposed materials exhibit unprecedentedly high ionic figure-of-merit (ZTi), as well as remarkable stretchability and autonomous self-healability without any external stimuli.

“We have developed a high-efficiency thermoelectric material that are intrinsically self-healable and highly stretchable through the blending of conjugated polymers and electrolyte polymers and the adding of cross linking agent that can form hydrogen bonds and polar bonds with them,” says Professor Jeon. 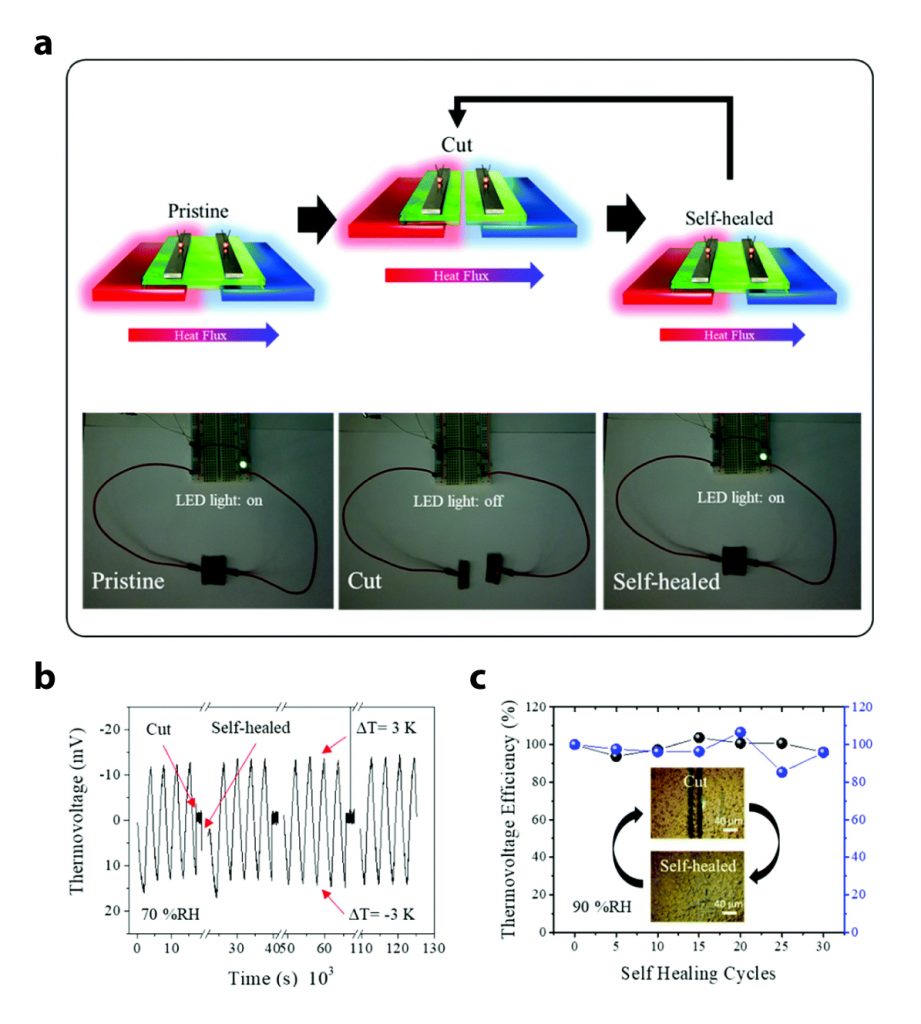 The figure of merit (ZTi) of the stretchable and self-healable ternary TE hybrids is 1.04, which is the highest among other organic TE materials developed so far. Notably, this ternary TE hybrid can withstand strains up to ∼750%, and retain its original TE performance even after multiple stretching cycles (30 cycles at ∼50% strain).

More importantly, with the use of this new TE hybrids, it is possible to manufacture an energy device that can directly produce and store electrical energy. Furthermore, the research team also demonstrated a self-healable and stretchable ionic thermoelectric capacitor device, using the ternary TE hybrid. This is because, since the output voltage of the TEG is low or is not constant, storing electricity for later use tends to be more efficient.

“Herein, for the first time, we developed high-performance, flexible, stretchable, and self-healable ionic TE materials,” says Professor Jang. “The applicability of our TE hybrids as an ITEC paves the way for self-healable and self-powered wearable energy devices.”

The findings of this study have been first published online in Energy and Environmental Science on May 15, 2020. This study has been supported by the National Research Foundation of Korea (NRF).