An international team of researchers, led by Professor Chunghun Lim (Department of Biomedical Engineering, UNIST) has made a surprising discovery that Hydras exhibit sleep-like behaviors that are similar to humans.

Their findings have been published in Science Advances on October 7, 2020.

An international team of researchers, affiliated with UNIST has made a surprising discovery that Hydras exhibit sleep-like behaviors, comparable to those in other animals with a well-defined central nervous system. This provides evidence that sleep exists even in the cnidarian Hydra vulgaris with a primitive nervous organization.

This breakthrough has been led by Professor Chunghun Lim (Department of Biomedical Engineering, UNIST), in collaboration with Professor Taichi Itoh from Kyushu University in Japan. In their study, published in Sciece Advances, the research team revealed that this brainless animal displays sleep behaviors that are similar to humans. It has been also confirmed that sleep promotes the proliferation of somatic cells in Hydras.

To examine any sleep-like state in Hydras, the research team video-recorded their movement during an artificial 12-hour light-dark (LD) cycle. By analyzing the differences between two consecutive imaging frames, they observed that Hydras exhibit human-like sleep characteristics that is to sleep at night and be awake in the day. This also includes sleeping extra to make up for earlier sleep deprivation.

The research team further analyzed the quiescent state in Hydra based on the behavioral criteria of sleep and confirmed that Hydra had a reversible episode of the behavioral quiescence because they spontaneously entered a quiescent period, while a light pulse at night readily interrupted their quiescent state. Then, they concluded that the silent behavior is relatively specific to the sleep-like state in Hydra. 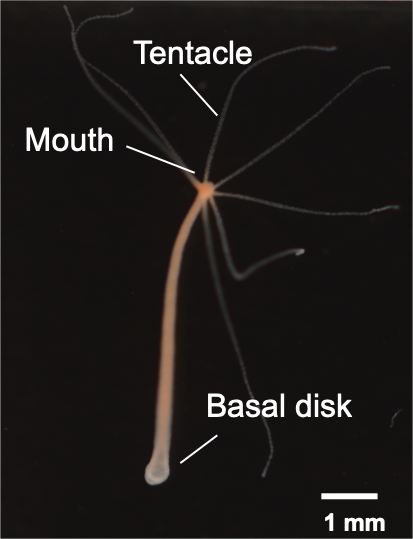 According to the research team, sleep-promoting effects of melatonin, GABA, and PRKG1 were conserved in Hydra. However, arousing dopamine unexpectedly induced Hydra sleep— the opposite of the effect on vertebrates. This suggests that dopamine’s role in suppressing sleep in vertebrates may have been completely reversed in the course of biological evolution.

“Our demonstration of the sleep-like state in Hydra and the commonality of sleep-regulatory genes, neurotransmitters, and physiology provide important insights into how ancestral sleep has evolved with developing CNS and how sleep-regulatory pathways have been reorganized accordingly,” noted Professo Lim.

Figure 2. The development of sleep regulation, according to the evolution of central nervous system

The research team noted that Hydra sleep was shaped by homeostasis and necessary for cell proliferation, but it lacked free-running circadian rhythms. To elucidate the molecular basis of Hydra sleep behaviors, the research team compared the gene expression profiles of control and sleep-deprived animals. Using quantitative polymerase chain reaction (PCR), they further validated which genes were up-regulated and down-regulated. Then, they ended up with a Hydra gene which was very similar to PRKG1 that showed sleep-promoting functions in worms, flies, and mammals. Using drugs known to inhibit or activate this gene, the team showed that PRKG1 also promotes sleep in Hydra.

On the other hand, one kind of mitochondrial enzyme, called ornithine aminotransferase (OAT) has opposite effects on sleep regulation, unlike in Hydra. Such opposing effects of ornithine metabolism on sleep were also evident between Hydra and Drosophila, suggesting the evolutionary switch of their sleep-regulatory functions. The study is the first to discover the roles of ornithine metabolism and OAT on sleep.

The findings of this research have been published in the October 2020 issue of Science Advances. This study has been supported by the Suh Kyungbae Foundation, the National Research Foundation (NRF) through the Advanced Research Center Program, the X-Project of Korea, and the Global Ph.D. Fellowship (GPF) program.