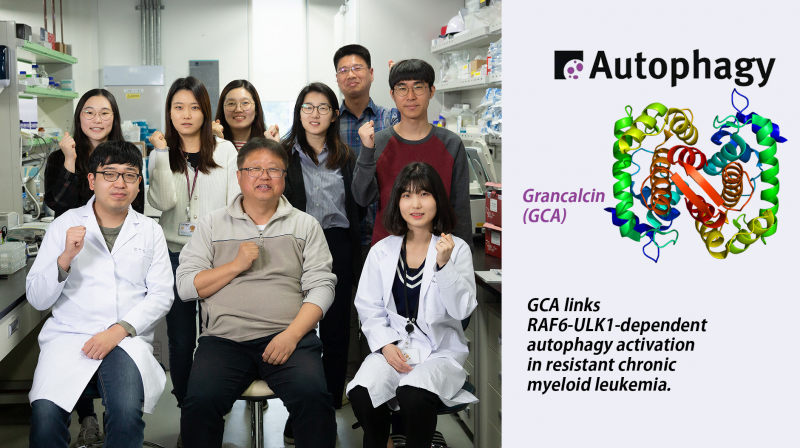 Their findings have been published in the March 2019 issue of Autophagy.

An international team of researchers, affilated with UNIST has identified a new gene that causes drug resistance against Novartis’s breakthrough cancer drug, Gleevec (Active ingredient: imatinib). Such finding has received a great deal of attention from researchers, as it could lead to more effective therapies for about 30% of those patients who developed overt resistance against Greevec.

Gleevec, first introduced in Korea in 2001, is a landmark drug that has vastly improved the outcomes of patients with a form of blood cancer, called chronic myelogenous leukemia (CML). With the introduction of Gleevec, the probability of long-term survival and apparent cure rate was much higher for CML patients who are in need of bone marrow transplantation.

However, like any other drugs, repeated use of the same drugs can lead to drug resistance and the medicinal effect will also drop. Drug tolerance will act as engines of leukemia cancer cells, allowing them to proliferate infinitely and thus raising the possibility of death within a year. Studies have also shown that about 10 percent of the chronic myelogenous leukemia patients are resistant to the drug, and 20 percent of the patients develop resistance after receiving treatment with Gleevec.

This research has been led by Professor Hongtae Kim in the School of Life Sciences at UNIST and Distinguished Professor Kyungjae Myung from the Center for Genomic Integrity Institute for Basic Science (IBS) at UNIST, in collaboration with Professor DongWook Kim from Catholic University of Korea and Professor JooYoung Lee from Chungnam National University.

In the study, the team has discovered a gene, called GCA (Grancalcin) that regulates Gleevec resistance, and thus identified a molecular biologic mechanism that activates TRAF6-ULK1-dependent autophagy through a leukemia rat model.

According to the study, the GCA protein (1) activates the TRAF6 protein and (2) activates and stabilizes the ULK1 protein by increasing the K63-associated ubiquitination of ULK1. This action ultimately increases the cell’s self-reprocessing process, thus increasing the survival rate of leukemia cells even with the continued use of targeted anti-cancer drugs. This molecular biologic mechanism has confirmed that Gleevec resistance is maintained. 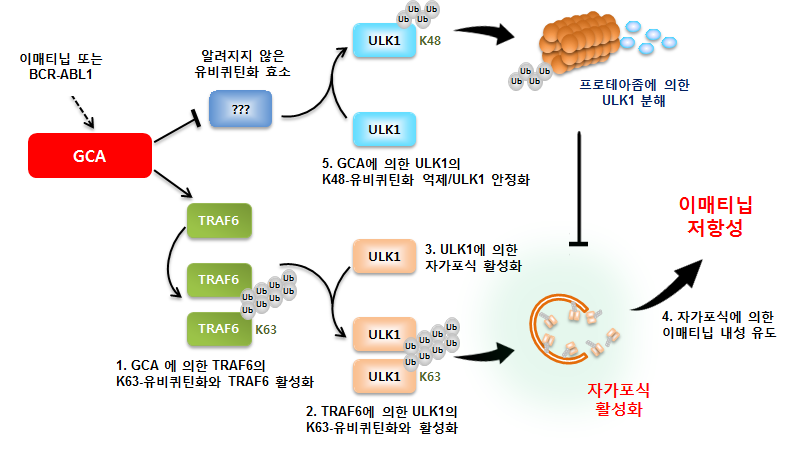 “In this study, we have identified GCA as a novel regulator of imatinib resistance in CML,” says Professor Hongtae Kim. “It is significant to note that our findings represent the basis for novel therapeutic strategies against CML.”

“Gleevec has helped patients with leukemia to a great extent, yet the treatment had no effect on some patients,” says Professor DongWook Kim. “This study has identified how Gleevec resistance occurs, which will significantly increase the likelihood of developing new diagnostic and therapeutic strategies against CML.”

Their findings have been published in Autophagy (IF=11.1), an internationally renowned journal in the field of medicine and cell biology on March 30, 2019.

Meanwhile, the team has identified a COBLL1 protein, which plays a crucial role in acquiring resistance to Tasigna (Active ingredient: nilotinib), using the next-generation sequencing and microarray method, and reported such findings in Leukemia, the world’s foremost journal in the field of leukemia in March 2017.