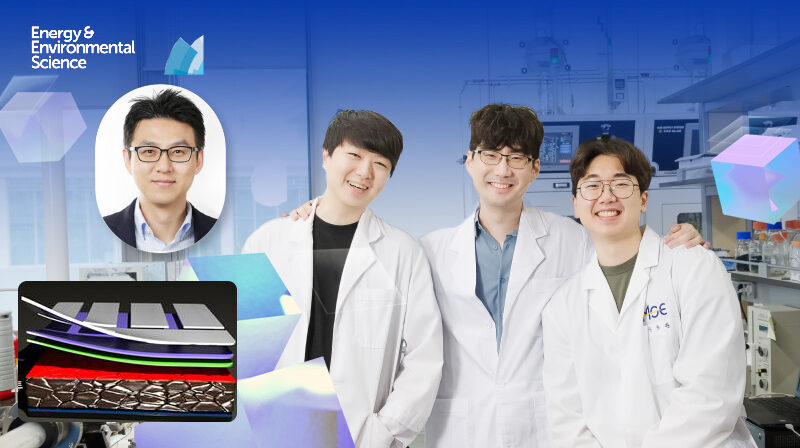 Abstract
Two-dimensional Ruddlesden–Popper (RP) phase perovskites are gaining increasing attention for passivating the defects of the bulk absorber layer in perovskite solar cells (PSCs). However, owing to their anisotropic structural features, the RP perovskite orientation substantially influences the charge transport efficiency, and thereby the PSC performance. We demonstrate the use of a highly oriented butylammonium RP perovskite as a surface passivation layer with bottom-up growth on the bulk perovskite absorber layer via vacuum deposition. In this process, the crystal formation time directly affects the crystallographic orientation of the passivation layer. By leveraging the passivating properties and controlled crystallinity, the RP perovskite considerably reduces the trap density of bulk perovskite and enhances the charge transport, reaching 21.4% of power conversion efficiency for vacuum-processed PSCs and improving the operational stability. The proposed passivation strategy allows the growth of highly oriented RP phase perovskite passivation layers toward the development of efficient, stable, and scalable PSCs.

A research team, led by Professor Hyesung Park in the Department of Materials Science and Engineering at UNIST has succeeded in manufacturing potentially high efficiency, stable, and scalable perovskite solar cells (PSCs) via vacuum deposition apparatus, a method of fabricating organic light-emitting display devices (OLEDs). Such method is also advantageous for the mass production of batteries, which is expected to further accelerate the commercialization of the PSCs, according to the research team. Figure 1. Schematic of inverted PSCs with a passivation layer.

In this study, the research team demonstrated highly efficient and stable PSCs with a vacuum-processed Ruddlesden–Popper (RP) phase perovskite passivation layer. By controlling the deposition rate of the RP phase perovskite, which directly influenced its crystallographic orientation, the research team successfully obtained a highly ordered 2D perovskite passivation layer. The 2D perovskite layer passivated the bulk perovskite defects and promoted the charge transport efficiency in the PSC. As a result, the BABr (V) inverted PSC has achieved a champion PCE of 21.4% in the resulting device with outstanding humidity and thermal stability. This number is by far the highest ever achieved for PSCs formed by vacuum deposition. In addition, it showed enhanced long-term operational stability, such as maintaining 62% of its initial PCE (average) when operated for for 1,000 hours under 60–70% relative humidity at room temperature, even without device encapsulation.

“Our findings provide a new perspective toward further improving the performance of PSCs by mitigating nonradiative recombination pathways in perovskites,” noted the research team.

Figure 2. Schematic of the perovskite crystal structure and charge transport for (a) control, (b) BABr (S), and (c) BABr (V) films.

The findings of this research were made available in June 2022, ahead of its publication in the journal, Energy & Environmental Science (ESS, IF = 39.714). This study has been supported by the Basic Science Research Program through the National Research Foundation of Korea (NRF), funded by the Ministry of Science and ICT (MSIT).