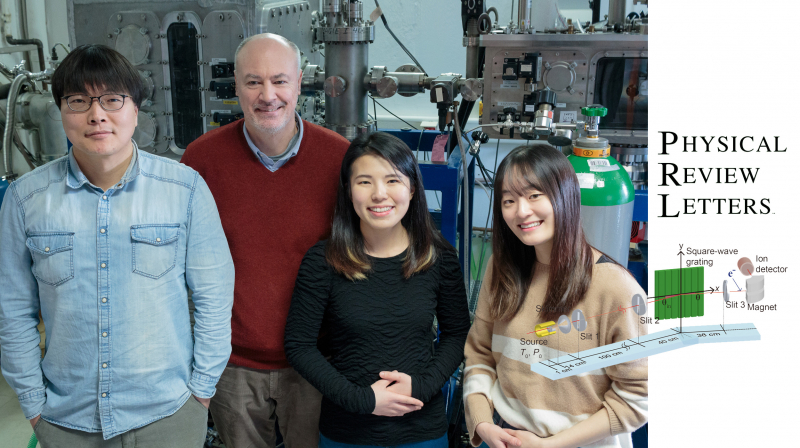 Peering into the Nanoworld with Matter-Wave Diffraction

Their study appeared in Physical Review Letters as Editors' Suggestion on January 31, 2019.

The laws of physics may not apply in the invisible nanoworld. Sometimes, a negligible amount of energy that exists between particles exerts a tremendous influence throughout. Yet, there is still a general lack of understanding of the forces of nature that govern the interactions between particles and physical entities.

A recent research team, led by Professor Bum Suk Zhao in the School of Natural Science at UNIST has laid a solid foundation for further study of dispersive interaction by verifiying a new mechanism for matter-wave diffraction.

The findings of this study have been published in the January 31, 2019 edition of Physical Review Letters (PRL), the world’s premier physics letter journal. Besides, it has been highlighted by the PRL editors as an Editors’ Suggestion.

In this work, Professor Zhao has taken one more step towards developing a method to measure the dispersive interaction through the verification of the new matter-wave diffraction mechanism, occurred in square-wave gratings with narrower stripe widths. 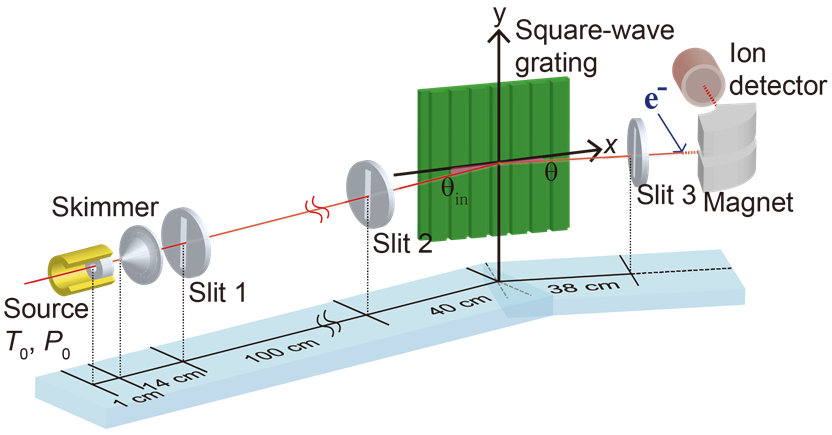 The schematic of the experimental setup.

“To measure the rugged surface of nanostructures, we made a plate with protruding squares,” says Ju Hyeon Lee in the Combined M.S/Ph.D. in Chemistry at UNIST, the co-first author of the study. “It will be applicable to various nanostructures.”

The researchers shot a wave of helium (He) or deuterium (D₂) on a square wave plate with a square of 400 micrometer (㎛, 1 ㎛ is 1 millionth of a meter) apart. At this time, the material wave was incident in a direction almost parallel to the diffraction plate.

“We have experimented with a square wave plate with a square line width reduced from 200 micrometers (㎛, 1 ㎛ is 1m 1m) to 10 ㎛,” says Lee Yeong Kim in the Combined M.S/Ph.D. in Physics at UNIST, the co-first author of the study. “As the line width decreases, the result of the reflection of the material wave is closer to the theoretical value of the periodic semi-planar aggregate.”

A schematic diagram of the matter-wave diffraction phenomenon in a periodic half-plane array.

A half plane refers to one side of an infinite plane cut into two straight lines. In optics, this ideal structure is used as a basic model to explain diffraction phenomena. When these half planes appear periodically, they become periodic semi-planar assemblies, and the theory about the diffraction that takes place here is already known. In this study, we first established this theory in wavewave optics, thereby laying the foundation for measuring the scattering interactions with the wave.

“Our data provide experimental confirmation of the widespread model,” says Professor Zhao. “Moreover, our results demonstrate that neither classical reflection nor quantum reflection are essential for reflective diffraction of matter waves from a structured solid, but it can result exclusively from half-plane edge diffraction.”

The square-wave gratings used in this study were manufactured by Professor Chang Young Lee and his research team in the School of Energy and Chemical Engineering at UNIST. The team carried out the experiments, using the grazing incidence matter-wave optical device from the Fritz Haber Institute of the Max Planck Association in Germany. This study has been supported by the Basic Science Research Program through the National Research Foundation of Korea (NRF) funded by the Korean Ministry of Science and ICT (MSIT).