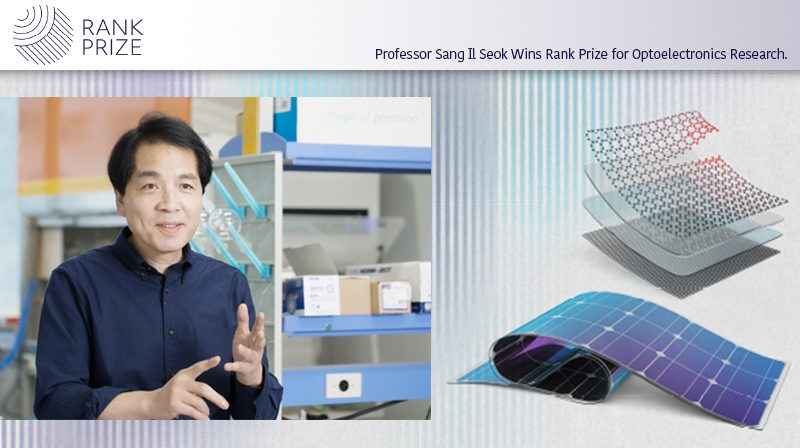 Distinguished Professor Sang Il Seok is one of seven internationally leading scientists to be awarded the Rank Prize for Optoelectronics 2022.

Distinguished Professor Sang Il Seok in the School Energy and Chemical Engineering at UNIST has distinguished himself with inclusion in the 2022 list of the Rank Prize for Optoelectronics.

The 2022 Rank Prize for Optoelectronics is awarded to seven internationally leading scientists, from several research laboratories, who have pioneered the development of new solar cell technology based on perovskite semiconductors which promises to play a key role in the future of solar power.

Professor Seok has been honored with this award in recognition of his outstanding contributions to the energy sector in both industry and academia by manufacturing the world’s most efficient (25.5%) perovskite solar cell, as certified by the National Renewable Energy Laboratory, US.

“It’s a great pleasure to be awarded the prestigious Rank Prize and I sincerely thank Rank Prize’s Optoelectronics Committee for recognizing perovskite solar cells as a promising solar power harnessing technology, by giving this year’s Rank Prize award to myself and fellow researchers in the field,” said Professor Seok.

Meanwhile, the award ceremony will take place in January 2022 in London, United Kingdom.