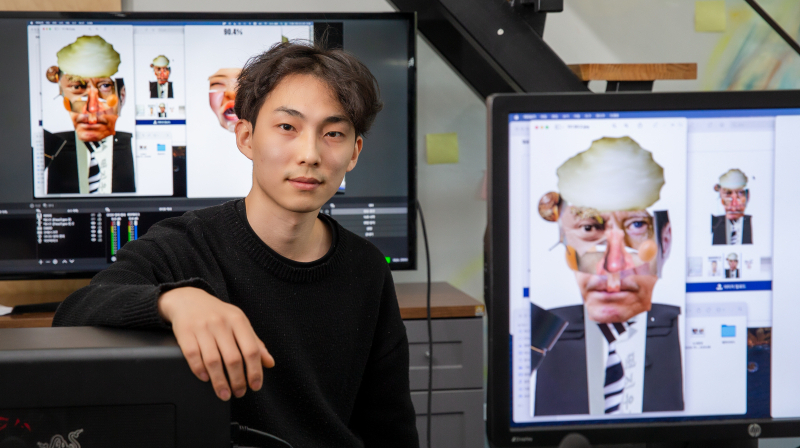 Science Cabin Residency Project: The Art Exhibition in My Room

The third residency project by Artist YoonSe Choi started on October 12 and will proceed until October 26, 2020.

The exhibited artworks, created by Artist Choi, are drawn with the techniques of using computer tools in collage creation by assembling different pieces to make a new, finished work of art. During his stay at Science Cabin, he produced a number of portraits, made from an assemblage of different forms.

“We often judge and shape our taste preferences based on automated recommendation algorithms, used by Amazon or YouTube, yet the accuracy of it remains questionable,” says Artist Choi. “Thus, I utilized face-recognition algorithms that provides a human face similarity matching to create a collage face.”

For collage creation, Artist Choi utilized face-recognition algorithms that provides a human face similarity matching by comparing two different images. Then, he took different parts of images, such as eyes, nose, mouth, and head, and placed them in a blank image until the similarity above 90% or more is reached.

Besides, what makes his project special, compared to other residency projects is that the audience also involved in the project. Throughout the project, Artist Choi reflected audience opinion via social media comments, and thus received recommendations from the audience for those elements from different pictures to create a photo collage, or make the change in the arrangement.

Meanwhile, the 2020 Science-Arts Convergence Residency Project takes place for three months from September 14 to November 30, 2020. A total of four artists will be taking part in this year’s residency project and work towards the development of their own artistic style and voice. The project deals with the theme of ‘Artist Canvas: 14-day Quarantine,’ in which each artist stays at the Science Cabin for 14 days to carry out their art projects in an open studio format. The first residency project began on September 14 by Artist Darae Baek, followed by the second residency project by Artist Nara Cho, which started on October 12, 2020.