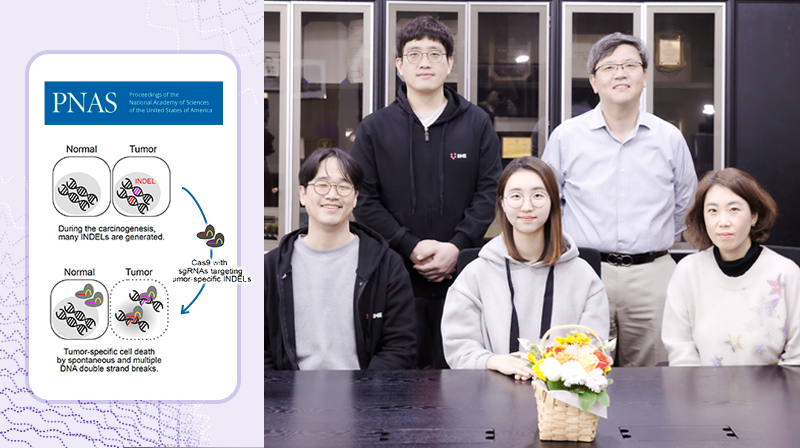 Distinguished Professor Kyungjae Myung and his research team in the Center for Genomic Integrity (CGI) within the Institute for Basic Science (IBS) at UNIST proposed a new therapy, called CINDELA that employs CRISPR-Cas9 to kill cancer cells without affecting normal tissues.

The work by Distinguished Professor Kyungjae Myung's team has been published in PNAS.

Diagnosis of cancers may be one of the worst news to patients and their families. Conventional treatment options such as radiation and chemotherapies often kill not only cancer cells but also normal cells, which results in painful side effects. Radiation and chemotherapies destroy cancer cells by producing DNA double-strand breaks in their DNA. Since both treatments target DNA in both normal and cancer cells, radiation and chemo-drugs cannot distinguish between cancer and normal cells. Thus, indiscriminate killing of healthy cells and side effects are unavoidable when using these treatments. Therefore, scientists have long been searching for a method to selectively target only cancer cells without affecting normal cells, which is a crucial requirement for ideal cancer therapy.

There have been two major developments in the biomedical science fields recently. One is cancer genomics, and the other one is the discovery of a site-specific endonuclease, called CRISPR-Cas9 (commonly called genetic scissors). Cancer genomics projects have found that regardless of their origins, most cancer cells accumulate many mutations including small insertion/deletion (InDel) of several nucleotides, single nucleotide changes, and large chromosomal aberrations. CRISPR-Cas9, the discovery which was recognized by the 2020 Nobel Prize in chemistry, is a technology that can be used to make DNA double-strand breaks in a sequence-specific manner.

Figure 1. Cancer cells tend to accumulate many mutations during their growth. These include single base substitutions, small insertion/deletions (InDel), and large chromosomal changes. Researchers made CRISPR-Cas9 reagents targeting tumor-specific InDel mutations that can induce numerous double-strand breaks in the DNA of cancer cells, effectively killing them. Because normal cells do not have these cancer-specific mutations, only tumor cells will be destroyed.

South Korean researchers in the Center for Genomic Integrity (CGI) within the Institute for Basic Science (IBS) combined these two concepts and proposed a new idea for cancer therapy. By using CRISPR-Cas9 to produce DNA double-strand breaks at cancer-specific mutations that only exist in cancer cells, they proposed a possibility of triggering cell death in cancer cells without affecting normal cells. Three CGI research groups (laboratories led by professors Kyungjae Myung, Taejon Kwon, and Seung Woo Cho) located in the Ulsan National Institute of Science and Technology (UNIST) teamed up and proved that it is indeed possible.

First, the researchers confirmed that enzyme-driven DNA double-strand breaks using CRISPR were able to induce cell deaths in cancer similar to physical or chemical breaks driven by radiation or chemotherapies, respectively. Then, they performed bioinformatics analysis to identify unique InDel mutations in several different cancer cell lines, including breast, colon, leukemia, glioblastoma, which are not found in normal cells. Based on this information, they successfully made CRISPR-Cas9 reagents targeting those mutations.

The scientists named this new treatment CINDELA, which stands for “Cancer-specific InDel Attacker.” CINDELA was found to be able to selectively kill cancer cells without affecting normal cells. It was discovered that CINDELA-driven cancer cell death was dependent on the number of DNA double-strand breaks created by CRISPR-Cas9. For example, CINDELA reagent which induced 50 breaks in the DNA was much better at killing cancer cells than the reagent that induced only 10 breaks.

In addition to cancer cell line experiments, researchers conducted further animal studies to verify CINDELA’s efficacy in living organisms. To do so, tumor cells (colon and lung cancer) were derived from patients and were xenografted into mice. It was found that the CINDELA treatment can substantially suppress the growth of tumors in these mice.

Notably, since CINDELA targets InDel mutations which are generated as byproducts during tumorigenesis, CINDELA can be applied to treat most tumors. “We believe CINDELA can become a novel therapeutic application for cancer treatments as personalized and precision medicine for all cancer patients without severe side effects,” the CGI Director Myung explained. As a next milestone, researchers have started applying this technology in tumors directly taken from patients, with research groups having expertise in the relevant technologies, such as gene delivery, companion diagnostic platform, and cancer genomics.

However, one obstacle that researchers had during all these experiments was the delivery of CINDELA reagents to tumors. Although researchers could achieve significant tumor growth inhibition using a high titer of the virus to deliver the CRISPR in mice, as of yet this may not be enough to directly treat human patients. However, such an obstacle is one of the major issues in the current CRISPR-Cas9 field. Researchers believe that in the near future, the development of new delivery systems will eventually help establish the CINDELA cancer treatment technology in cancer patients.

Notes for Editors
This press release is made available courtesy of the IBS Communications Team. The online version of the original article can be found HERE.