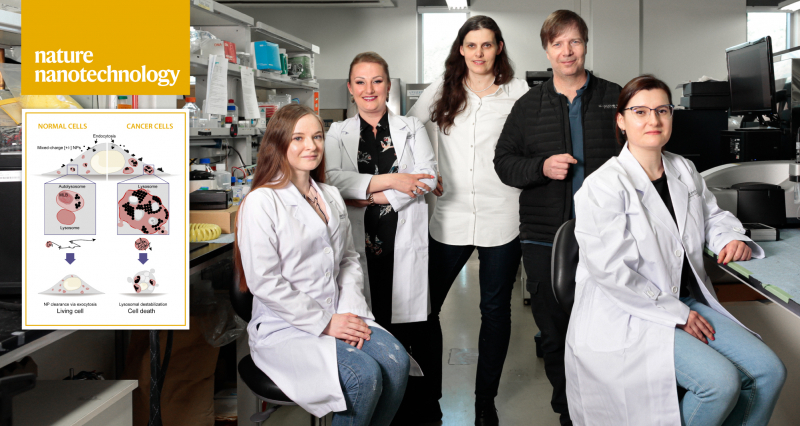 A research team, led by Distinguished Professor Bartosz Grzybowski (second from the right) has unveiled a novel approach to selectively target and kill several types of cancer cells.

A recent work by Distinguished Professor Bartosz Grzybowski has been published in the latest issue of Nature Nanotechnology.

An international team of researchers, affiliated with UNIST has discovered a novel approach to selectively target and kill several types of cancer cells.

Lysosomes are small sacs filled with a large number of enzymes and acid that work to break down and recycle damaged and unwanted cellular components. In other words, they are simultaneously both a cell’s waste container and recycling center. Typically, lysosomes get rid of the byproducts of this degradation process by releasing them outside the cell. Releasing the rubbish outside only makes sense. For example, imagine collecting all the rubbish in your house into a bin and then emptying that very same bin right on the floor in the kitchen, making your living conditions miserable. Similarly, puncturing the lysosomes and releasing their toxic contents inside the cell damages cellular components beyond repair which, in extreme cases, can trigger cell death.

Since cancer lysosomes are easier to damage than healthy cells’ lysosomes, scientists have been looking into using this strategy as a promising alternative for targeting cancers that are resistant to conventional treatments. However, only a handful of potential therapeutics can target lysosomes, and most of them lack cancer selectivity.

Published in Nature Nanotechnology, this study shows that nanoparticles covered with a mixture of positively [+] and negatively [-] charged molecules can selectively kill cancer cells by targeting their lysosomes. The death of cancer cells results from a remarkable succession of transport and aggregation phenomena, starting with the formation of small nanoparticle clusters at cell surfaces and culminating with the assembly of micron-sized nanoparticle crystals inside the cancer lysosomes. Nanoparticle crystals induce lysosomal swelling, gradual loss of the integrity of lysosomal membranes, and finally cell death. 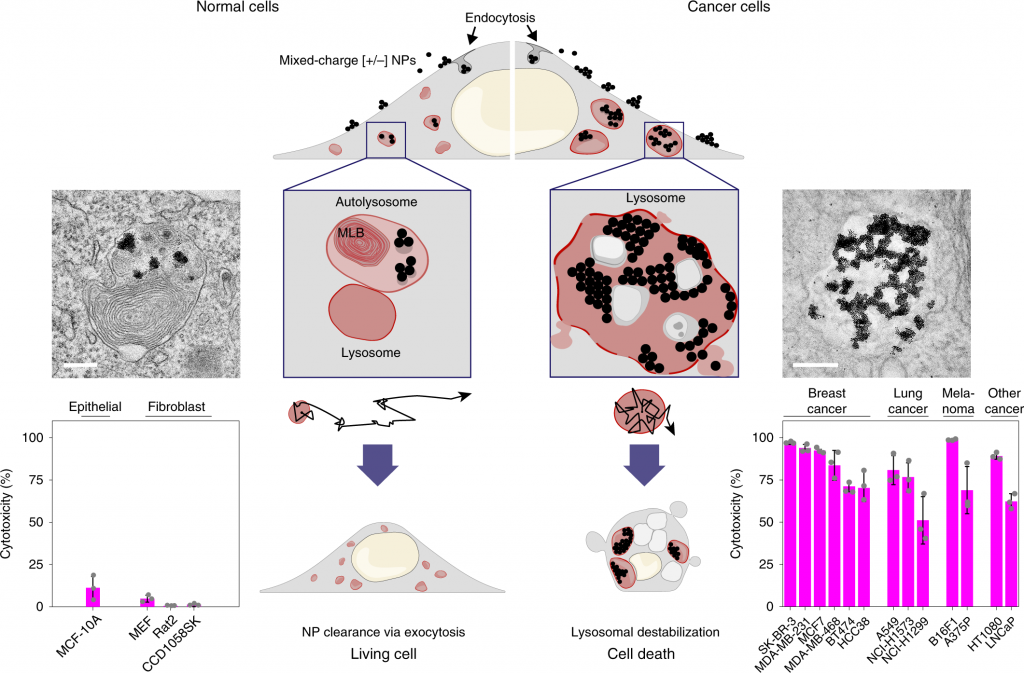 “In this work, we have harnessed the deregulated waste management system of the cancer cells to act as a ‘nanoscale assembly line’ for constructing high-quality nanoparticle crystals that destroy the very lysosome ‘reactors’ that allowed them to grow in the first place,” says Distinguished Professor Bartosz A. Grzybowski, co-leading author of the study.

“Our conclusions are based on a comparison of thirteen different sarcomas, melanoma, breast and lung carcinoma cell lines with four non-cancer cell types,” adds the first author of the study, Magdalena Borkowska. “The nanoparticles were effective against all thirteen cancer lines, while not harming non-cancerous cells.” 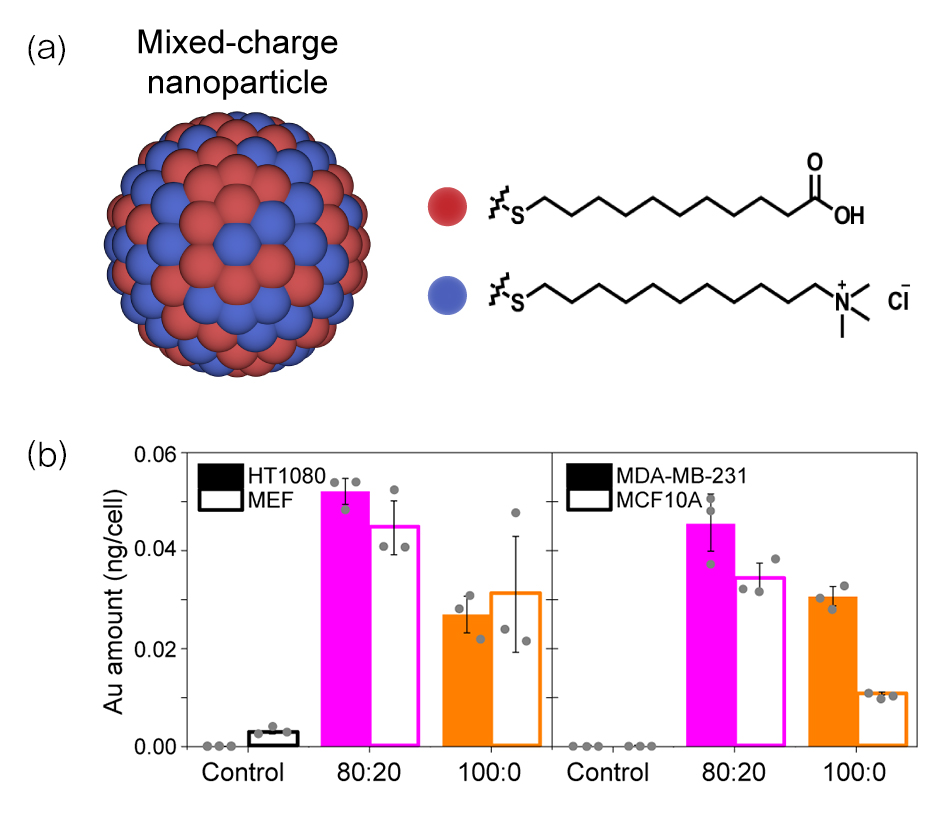 The aggregation of the nanoparticles as they transit through the endolysosomal system of cancer cells is a complex process. The team discovered that nanoparticles with a surface composition of about 80% [+] and 20% [-] ligands show optimal cancer selectivity. The fact that negatively charged ligands are also pH-sensitive seems to be key to cancer selectivity. In the acidic pH, found around cancerous cells and inside the lysosomes, these ligands are protonated and prone to interact with similar ligands on the neighboring nanoparticles, thus promoting their aggregation. The balance between attractive interactions ̶ the bonds between [-] ligands and strong interactions between nanoparticle cores ̶ and electrostatic repulsions between [+] ligands on the neighboring particles determine the extent of nanoparticle aggregation. Overall, the interactions between particles, serum proteins and cells’ internal environment work in concert to impair cancer lysosomes.

“The nanoparticle clusters may alter the lipid composition of the lysosome membrane, affect its integrity and render it less mechanically robust. Unexpectedly, our team also discovered that some proteins, such as the cell growth signaling molecules mTORC1, are displaced (and thus inhibited) from the surface of nanoparticle-containing cancer lysosomes. This is important because cancer cell growth and division require mTORC1, and nanoparticles are shutting it down only in cancer cells,” explains Adjunct Professor Kandere-Grzybowska.

While single nanoparticles are approximately the same size as an average protein molecule, and thus too small to be seen with most dynamic live-cell microscopy approaches, the crystals composed of several nanoparticles can be observed. The team used a combination of complementary approaches, including dark-field microscopy, confocal reflection microscopy, and TEM, as well as biochemical and computational approaches to assess the full impact of mixed-charge nanoparticles on lysosomal organelles.