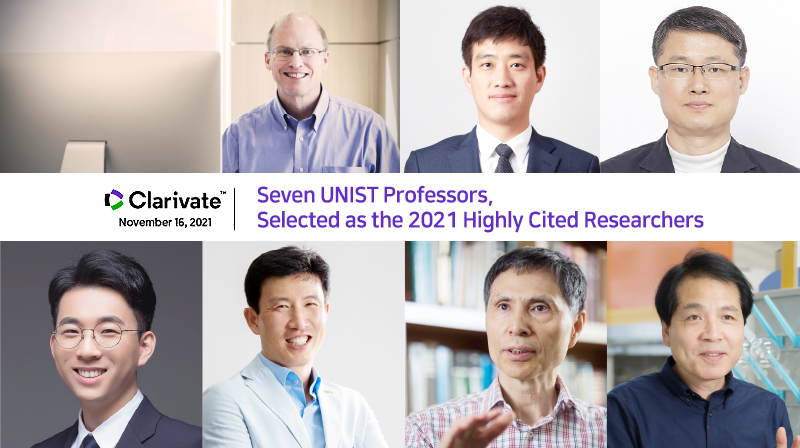 Seven UNIST researchers distinguished themselves with inclusion in the 2021 list of Highly Cited Researchers by Clarivate Plc.

Seven UNIST researchers have once again distinguished themselves with inclusion in the prestigious ‘Highly Cited Researchers (HCR)‘ for 2021, compiled annually by Clarivate Plc. Published on November 16, the annual list includes researchers with multiple papers ranking in the top 1% by citations for their field and publication year.

Rodney S. Ruoff, Director of the Center for Multidimensional Carbon Materials (CMCM) at the Institute for Basic Science (IBS) and Distinguished Professor in the Department of Chemistry at UNIST has been named as one of the world’s most influential minds in both fields of materials science and chemistry. Professor Ruoff has been named to the annual HCR list for eight consecutive years, since 2014. In 2018, he was also listed on the Clarivate’s annual list of Citation Laureates – researchers whose work is deemed to be of Nobel stature.

Jaephil Cho, Director of Research Center for Innovative Battery Technologies and Distinguished Professor within the School of Energy and Chemical Engineering, is known as the world leading expert on secondary batteries. Professor Cho has been named to the 2021 HCR List in materials science and this is the sixth time he has made the list. He is also a founder of SM Lab, a battery material startup for rechargeable batteries. The company aims to commercialize their nickel-rich cathode material through mass production in the first half of next year at the earliest.

Sang Il Seok, Distinguished Professor in the School of Energy and Chemical Engineering at UNIST and a master of fusion research, has been named in the annual HCR list for 2021 in materials science and this is the fourth time he has made the list. Besides, he is one of seven internationally leading scientists to be awarded the Rank Prize for Optoelectronics 2022.

Professor Jong-Beom Baek (School of Energy and Chemical Engineering) and Distinguished Professor Kwang Soo Kim (Department of Chemistry) have also been named to the 2021 HCR List in cross-field and this is the fourth time they made the list. Besides, Professor Hyun-Wook Lee, a leading expert in the area of in-situ transmission electron microscopy (TEM), has also been named in the HCR list’s cross-field category for second consecutive years.

Seung Woo Cho, a professor in the Department of Biomedical Engineering at UNIST, has been newly included in the HCR list’s cross-field category for the first time. His research focuses on the development of customized medical device via gene correction, as well as the identification of non-coding DNA, using gene editing technologies.