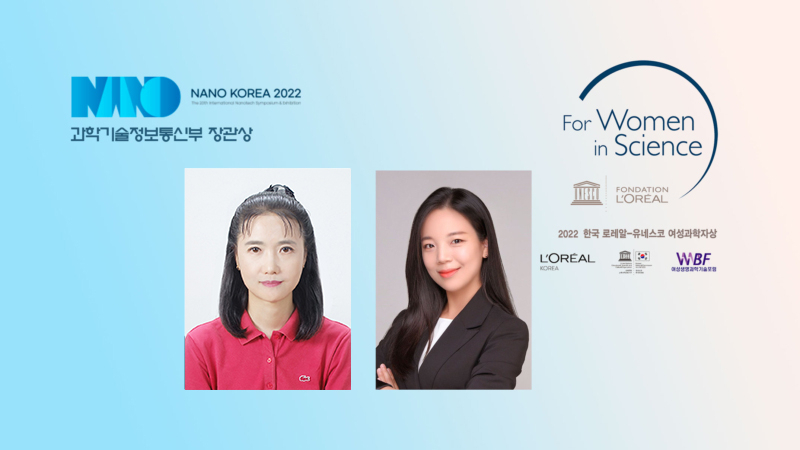 Hidden Figures of Energy and Chemical Engineering at UNIST Honored for Achievements in Research! The plaque of the Minister of Science and ICT Award, presented at the Nano Korea 2022. l Image Credit: Professor Ji-Hyun Jang

Professor Ji-Hyun Jang in the School of Energy and Chemical Engineering at UNIST has been awarded the Minister of Science and ICT Award at the 20th international nano technology exhibition, namely the ‘Nano Korea 2022.’ This award has been given to her in recognition of her contributions to the development of more efficient hydrogen production technology with the use of Germanium‐doped artificial leaves.

Artificial leaves are silicon-based devices that use solar energy to split hydrogen and oxygen in water, thereby producing hydrogen energy in a clean way, leaving virtually no pollutants. As a result, this has been considered as an emerging technology that contributes to realizing the 2050 Carbon Neutrality.

Hematite (α-Fe2O3) is considered a promising material for photoelectrochemical water splitting due to its excellent stability in alkaline media, low cost, and high abundance of iron. However, it features a short hole-diffusion-length, low electrical conductivity, and low absorption coefficient issues. To solve this, researchers have proposed several doping approaches, using other substances and germanium was one of them. However, it proved as less effective than other substances. In this regard, Professor Jang and her research team found effective solution to to improve the efficiency of hydrogen production. Their findings have been published in the July 2022 issue of Nature Communications.

Nano Korea, the global market place for commercialization of nanotechnology, is one of the Top 3 international nanotechnology convergence events. Took place in KINTEX (Korea International Exhibition Center) in Goyang, Gyeonggi Province, the exhibition invited about 200 industry technology specialists to join a discussion forum, which provided insight into the latest trends in advanced nanotechnology.

Professor Kang Hee Ku in the School of Energy and Chemical Engineering at UNIST has been honored with the Fellowship Award at the ‘21st L’Oréal Korea-UNESCO For Women in Science Awards.’ Fellowship Award is given to talented young women researchers with outstanding potential.

Professor Ku’s research group, PCFL (Polymers & Complex Fluids Laboratory) at UNIST is interested in design, synthesis, and engineering of advanced soft matter. The aim of the research is to understand the physical and chemical behavior of soft matter based on polymer science and colloid/interface engineering. We are currently interested in the following topics of polymer chemistry and physics, colloid mechanics, and soft robotics. Professor Ku obtained her Ph.D. degree from KAIST 2018. Prior to joining UNIST, she worked as an assistant professor of Chemical Engineering and Applied Chemistry at Chungnam National University, Korea.

Despite her short research experience, Professor Ku published an invited review paper in the Advanced Functional Materials in 2018, and has been working as an invited editor for Polymers (ISSN 2073-4360) since March 2020.

Meanwhile, the International Awards L’Oréal-UNESCO For Women in Science was created to improve the position of women in science under the belief that “The world needs Science, and Science needs Women“. Hosted annually by the Women’s Bioscience Forum and sponsored by L’Oréal Korea and Korean National Commission for UNESCO, this year’s award presentation ceremony was held at the Fairmont Ambassador Seoul Hotel on July 5, 2022.