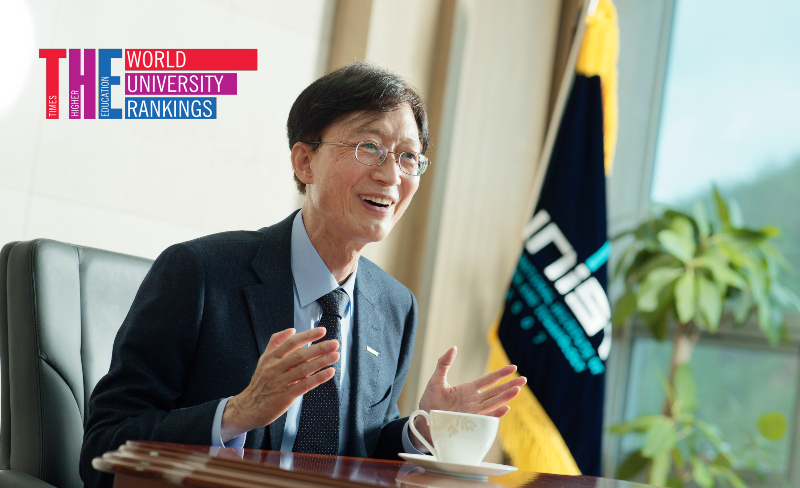 When Yong Hoon Lee became president of Ulsan National Institute of Science and Technology (UNIST) in 2019, he was inundated with visits from academics.

“I was surprised that so many professors visited the president’s office and asked for something, often some funding or support for graduate students,” he says.

Those kinds of requests would usually be handled by a department head or dean, but Lee discovered that no such roles existed at the then decade-old institution. His first task was sorted: decentralise the university by establishing a college system.

“I was, frankly speaking, bothered too much,” he says.

Not many university leaders have the chance to shape and run an institution that is in its infancy. Lee seems to relish the opportunity.

In the latest in our Talking Leadership series, he tells Times Higher Education how he revamped undergraduate education, how he keeps academics and the government on the side and how he is dealing with the challenge of South Korea’s declining population.

UNIST opened its doors in 2009 and less than two years later it announced its ambition to be ranked in the world’s top 10 science and technology universities by 2030.

It is the only university in South Korea where all courses are conducted in English, and teaching is based on the flipped-classroom model. To encourage interdisciplinary learning and research, students are required to take courses in at least two different subject areas, while all academics are appointed to at least two schools.

Six years ago, UNIST had around 150 academics. By the time Lee joined that figure had doubled, and there are now 463 scholars at the institution – far too many to be managed by a single university leader.

Lee established three colleges – the College of Engineering, College of Information and Biotechnology, and College of Natural Sciences – and appointed a dean to lead each one. Each college was then split into several departments run by department heads, while personnel committees were created to help the new leaders make decisions and implement change.

“I gave some funding to the deans and department heads that they could use for operations and to help our professors. In addition to that, I asked them very strongly that they operate their personnel committees with authority,” Lee says. “Many of the issues that used to come to the president now come to department heads and the deans. In doing that, I can concentrate on new projects.”

It’s a move that seems to have paid off; the number of new initiatives that Lee has implemented during his 26 months leading UNIST is impressive. He has reorganised the undergraduate curriculum to increase the range of courses and provide students with more hands-on experience; established three new graduate schools in the areas of artificial intelligence, semiconductors and carbon-neutral technologies; and launched several one-day lecture series for students and the public on topics in science and technology such as autonomous vehicles and blockchain.

Lee’s overarching strategy is to shift the university from “doing well” to excelling at the “things that must be done”. It sounds like a subtle distinction, but he says the core aim is to focus education and research more explicitly on areas that are “very important for the future of the Korean economy”, such as AI, semiconductors and smart healthcare. The main strength of UNIST to date has been in chemistry and chemical engineering.

Educational innovation has been another key priority for Lee. In November, at an event held to mark the second anniversary of his presidency, he lambasted that “science and engineering education seems stuck in the 1950s” and that “bold changes are needed to keep up with the rapidly changing pace of technological innovations”.

Lee does not attempt to tone down his comments; if anything, he puts his views more strongly, saying that science and technology education has barely changed for the past 200 to 300 years.

One of his concerns is that undergraduate students have too many things to learn and too much time is spent on teaching old technologies, leaving little space to learn about the latest innovations; he has helped alleviate this at UNIST by introducing more course diversity and flexibility. For example, previously all first-year students were required to take two calculus courses; now the second is only compulsory for those specialising in certain areas, such as electrical engineering.

Lee has also created more opportunities for project-based learning – an approach he calls “combat-type education” because instead of simply acquiring knowledge, students learn fundamental rules and then apply these directly to challenges. Last year, the university formed 83 undergraduate research teams, each including three to five students and each with its own problem to solve. The teams work on the challenge for at least a year but they can continue with the project until they graduate.

The programme is resource-intensive. Each group has its own academic adviser (selected from the pool of full professors at the university) as well as a teaching assistant (one of the university’s graduate students). UNIST secured about US$1.5 million (£1.1 million) from the South Korean government to pay for equipment and the running of experiments.

Lee says that “getting additional funding is very difficult everywhere in the world”, suggesting that South Korea is no exception. But he seems to be very successful in that regard. The three new graduate schools, which were created in a bid to widen the domestic talent pool in important industries and help UNIST lead the “digital new deal” and “green new deal” in Ulsan, were also created thanks to funding from national and local governments.

Overall, UNIST’s funding from the Korean government has increased by 25 per cent in the past two years.

He says the key to winning funding is to do “very careful planning” and find a topic that resonates with the goals and beliefs of the government, in particular the ministry of science and technology. In the case of South Korea, these objectives include innovation in education and supporting local industries and economies.

“It is very important for us to find the right topics and the right projects that our government likes the most. When we have found such topics and projects, we were able to get additional funding,” he says.

Lee is no stranger to young universities. He previously worked at the Korea Advanced Institute of Science and Technology (KAIST) for 30 years, joining as a professor of electrical engineering when the university was only 18 years old and progressing to head of department, dean and vice-president roles.

Lee says that UNIST was modelled on KAIST and he has borrowed several ideas from his former institution during his leadership. Most notably, last year he established the UNIST Development Foundation, modelled on the KAIST Development Foundation, the philanthropy arm of the university. It led to the biggest donation in UNIST’s history – a KRW 30 billion (£18 million) gift from the chairman of a local pharmaceutical company, who asked that the money be used towards establishing a new innovation model focused on fostering local talent and youth start-ups.

But Lee says there are significant differences between the universities. The average professor at UNIST is just 44 years old. Academics at KAIST tend to be older and they are therefore more reluctant to change, he says.

“In the case of KAIST, while I was working as a dean and provost, I tried to change some parts of the undergraduate education. But it was very difficult … Senior professors have their own philosophy on education,” he says.

However, Lee says that convincing academics at UNIST of the value of new initiatives is not all plain sailing.

“Academics are very difficult to persuade. If I just ask them to work with our staff members on a new project, usually they do not cooperate,” he admits.

Instead, Lee organises a regular brainstorming meeting with academics and staff members, the purpose of which is to generate new ideas. After the meeting, Lee decides which proposals are worth pursuing and asks academics and staff to work on the details. They tend to cooperate because they have been involved from the beginning, he says.

He persuaded UNIST academics to join the new graduate schools and create curricula for the programmes with the promise of additional funding for research.

“Without some additional funding and incentives, the academics and professors do not move. I cannot persuade them,” he says. “Professors are … interested in their research, not education.”

One of the major challenges for university leaders in South Korea is the country’s shrinking population. One professor warned in December that nearly half of the country’s universities could close in the next quarter-century, with institutions outside Seoul especially hard hit.

“Personally, I ask my students to marry early and have a number of children,” Lee quips when asked whether he has any solutions to the demographic dive.

Ulsan, where UNIST is based, has an additional population-drain challenge. Nearly 10,000 citizens, many of them young people, leave the city each year, he says. “One reason for that is because we don’t have enough universities. There are not enough places for our high school graduates, so they leave the city and then many of them do not come back.”

For the population of 1.1 million, there are just two universities: the comprehensive University of Ulsan, and UNIST. But opening new institutions is a hard pitch to sell to the government at a time when many in the country are struggling with recruitment.

Lee has worked with the city of Ulsan to increase the annual number of new undergraduates at UNIST by 40, to 400. The extra students are all top candidates from the region

But 40 new places is just a tiny fraction of the number fleeing the city each year. Would it help UNIST if another university opened in the area, or would it create more competition?

UNIST is fast approaching its self-imposed deadline to be ranked in the world’s top 10 science and technology universities. What does it need to achieve next to get closer to that goal?

“Frankly speaking, I don’t think UNIST as a whole can reach the top 10 universities in the world,” Lee says. “But in some areas, especially related to chemistry and chemical engineering, we can do something.”

UNIST is ranked 32nd in the world in US News and World Report’s material science subject ranking, and is listed in the top 100 for nanoscience and nanotechnology, chemistry, and energy and fuels. Lee is hoping to launch a new Institute for Basic Science centre in chemistry – such centres are guaranteed funding for 10 years – and hire new academics to reach the top 10 in the fields within the next decade.

Other than that, Lee isn’t yet sure what new initiatives are on the horizon for UNIST.

“For the last two years, I was able to start the ideas that I brought here,” he says. “So, what I’m doing now is talking a lot with our professors and staff members. I need to make some new ideas.”