Home All News News THE World University Rankings 2021: UNIST Named Among Top 200 in the World! 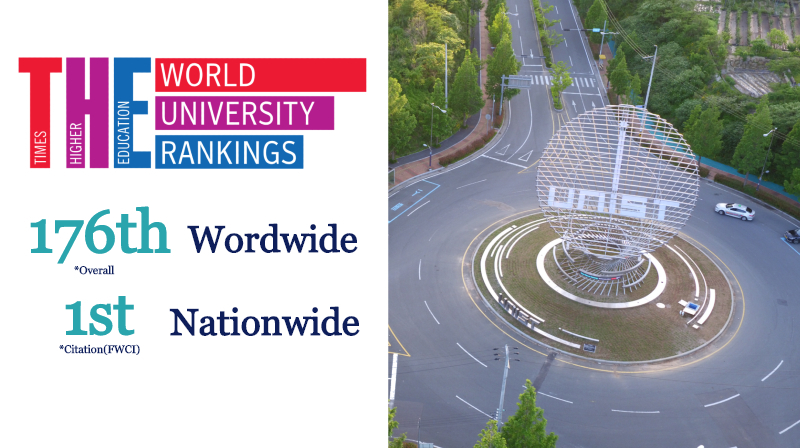 UNIST has been named the world’s 176th best university, according to the 2021 edition of the THE World University Rankings. It also made a climb of one spot from last year to be ranked 6th nationally.

THE World University Rankings 2021: UNIST Named Among Top 200 in the World!

UNIST has entered the Top 200 in the 2021 edition of THE World University Rankings.

UNIST, in terms of citations, ranked No. 1 in South Korea for the fifth year in a row.

UNIST has been named the world’s 176th best university, according to the London-based Times Higher Education World University Rankings. The university also made a climb of one spot from last year to be ranked 6th nationally.

The 2021 rankings, released on the 2nd of September, is based on 13 carefully calibrated performance indicators, designed to capture the full range of universities actitivies. Those indicators cover teaching, research, citations, industry income, and international outlook.

For the first time since 2018, UNIST has entered the top 200 in the THE World University Rankings, having risen from last year’s ranking in the 201-250 band. The rankings also indicate that UNIST, when measured based on the number of citations a university’s research obtains, has maintained its position as South Korea’s top university and continues to be counted among the top universities in the world.

This year, only seven Korean universities have made the top 200 in the THE World University Rankngs. Heading the list is the Seoul National University at 60 on the list, followed by KAIST at 100, the Sungkyunkwan University at 101, POSTECH at 151, the Korea University at 167, UNIST at 176, and the Yonsei University at 187.

“We will strive to foster future talents and develop cutting-edge science and technology through research and education that will lead the world in scientific and technological innovation,” says President Yong Hoon Lee of UNIST.