Their findings have been published in the March 2021 issue of Nano Letters.

Metamaterials are artificially crafted composite materials whose optical functionalities come from patterns or microstructures on their surface. Unfortunately, the design and fabrication of these microstructures still require an extremely time-consuming process. 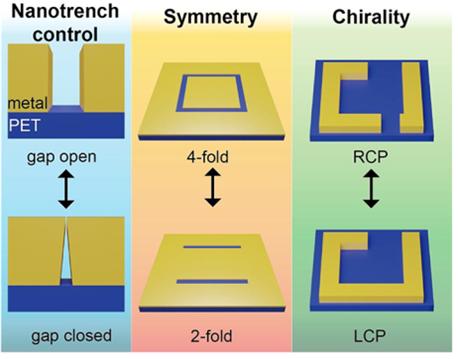 In this study, the research team realized mechanically closable nanotrenches for active electromagnetic wave control over broad spectral ranges. Their findings also showed that the fully closable nanotrenches can be embedded in metamaterials of various designs in a predefined and scalable manner. They further identified the deformation mechanics during a closing operation and explained the electromagnetic wave modulation in the visible–NIR regime and the terahertz regime. Because a closable nanotrench enables mechanical control over topology, it will find many applications requiring nonlinear switching of metamaterial multifunctionalities, noted the research team.

Figure 2. Closing mechanics and electromagnetic extinction of closable nanotrenches. (Left) SEM and optical transmission images of fabricated closable nanotrenches. Trench widths are 20 nm for the top SEM and bottom optical images and 200 nm for the bottom SEM images. (Right) Transmission intensities for various bending radii measured in visible–NIR, terahertz, and microwave ranges, where terahertz transmission spectra including and excluding the substrate-thickness-related Fabry-Pérot oscillations are depicted by solid and dotted lines, respectively. The sample geometries are given in the insets and the sample heights for microwave and terahertz/visible–NIR measurements are 100 and 150 nm, respectively.

Metamaterials that applied this technology were able to control light-specific characteristics such as frequency, intensity, phase (shape of wave), and polarization of electromagnetic waves (visible light, terahertz wave, millimeter wave, etc.) in various wavelength areas. Experiments have also shown that resonance frequencies have more than doubled in most areas, including visible light, and that the intensity of light can be adjusted by more than 99.9% in the Terahertz area, which is considered to be a 6G communication frequency. It could also control both polarization and phase of light.