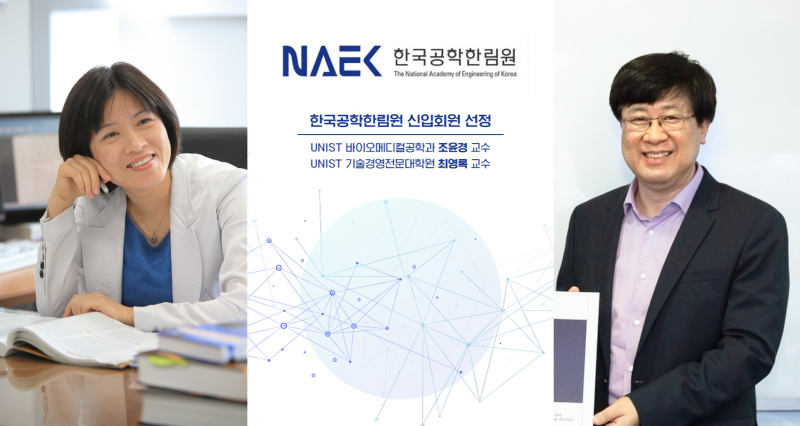 Two UNIST Professors Elected as Member of National Academy of Engineering of Korea!​

Prof. Yoon-Kyoung Cho and Prof. Young Rok Choi have been elected as members of the National Academy of Engineering of Korea.

Yoon-Kyoung Cho (Department of Biomedical Engineering, UNIST) and Young Rok Choi (Graduate School of Technology and Innovation Management, UNIST) have been elected as members of the National Academy of Engineering of Korea (NAEK).

On January 5, the National Academy of Engineering of Korea has announced that it has elected 50 new members and 89 associates in recognition of their distinguished and continuing achievements in their original research. It has been said that the election to NAEK membership is among the highest professional distinctions accorded to an engineer.

The National Academy of Engineering of Korea is a special corporate body that has been established in 1996 for the purpose of promoting a more efficient development of engineering and technology, in addition to discovering and recruiting talented engineers. It aims to discover and acknowledge engineers who have made remarkable contributions to the technological development in universities, companies, and research institutes, and to contribute to Korea’s creative engineering technology development through academic research and supporting projects. New members are elected from experienced associate members, and also are subject to the approval of the general meeting.

Yoon-Kyoung Cho, Group Leader of the IBS Center for Soft and Living Matter and Professor in the Department of Biomedical Engineering at UNIST, has been elected as an associate member in the chemical and biomolecular engineering division of the NAEK for her leadership in microfluidic lab-on-a-chip technologies. She had also attained national and international attention for proposing a fidget spinner-inspired microfluidic chip that can diagnose infectious diseases at the time and place of patient care in May of last year. In 2016, Professor Cho was also elected as a Fellow of the Royal Society, the UK’s most prestigious scientific organization.

In addition to Professor Young Rok Choi and Professor Yoon-Kyoung Cho, a total of 89 associate members have been newly elected to the NAEK, this year. This includes Professor Seungyong Hahn from Seoul National University, Professor Kyeong Cheol Yang, and CEO Hyeon-Mo Ku of KT. This brings the total new membership to 289 and the number of associate members to 347.