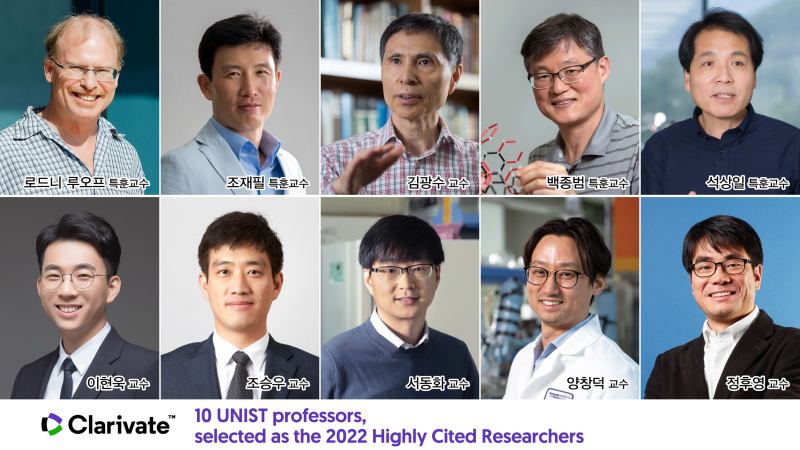 Ten UNIST researchers distinguished themselves with inclusion in the 2022 list of Highly Cited Researchers by Clarivate Plc.

Ten UNIST researchers have once again distinguished themselves with inclusion in the prestigious ‘Highly Cited Researchers (HCR)‘ for 2022. This was the highest ever achieved among universities in South Korea, this year.

Clarivate Plc., a global leader in providing trusted information and insights to accelerate the pace of innovation, revealed its 2022 list of Highly Cited Researchers on November 16, 2022. Those chosen for the 2022 list have authored papers that rank in the top 1% by citations for field and publication year worldwide. Meanwhile, the 2022 list is based on the number of citations per paper published over an 11-year period from January 20011 to December 2021. Overall, the ranking includes 6,938 researchers from 69 countries and regions and 22 distinct research fields.

The ranking revealed that the United States boasts the highest number of HCRs, with 2,764 researchers on the list, following Mainland China (1,169). Behind them are the United Kingdom (579), Germany (369), and Australia (337). Harvard University, in particular, produced 233 researchers, making it the world’s largest producer of HCRs. The Chinese Academy of Sciences (228) comes in second overall, followed by Stanford University (126), and the National Institutes of Health (113).

The full Highly Cited Researchers 2022 list and executive summary can be found HERE.