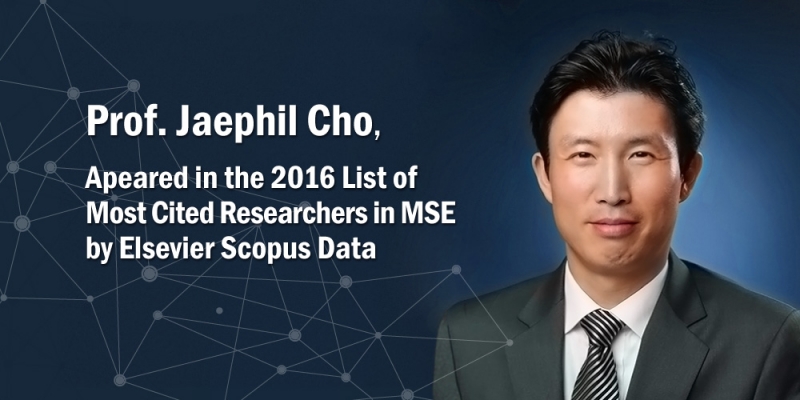 UNIST Professor Jaephil Cho of Materials Science and Engineering has been included among the 300 most cited researchers worldwide for his innovative and prolific research in MSE.

UNIST Makes Mark on Global List of Most Cited

Dr. Jaephil Cho, listed in the 2016 "Most Cited Researchers in MSE by Elsevier Scopus Data.

Dr. Jaephil Cho, a professor of Energy and Chemical Engineering and Dean of Research Affairs at UNIST, was named one of the world’s most influential researchers in the 2016 List of Most Cited Researchers in Materials Science and Engineering (MSE) list.

In the review, which was conducted using citation data from the Elsevier Scopus Database, MSE Supplies compiled the ranking data and listed the names and institutions of the highly cited scholars. Among all the researchers, only the top 300 in the field of MSE are included in the list ranked by the total citations of their papers.

Being selected into the list of “Most Cited Researchers” means that Prof. Cho’s citations of thesis as the first author and corresponding author are at the top level among all researchers in his subject. And he has a world-wide influence in his area, his researching results also made distinguish contribute to the development of the area.

When ranked by the number of highly cited scholars, a total of eight Korean researchers have been named in the list, including Distinguished Prof. Taeghwan Hyeon of Seould National University (SNU) whose research focused on nanomaterials and Prof. Ryoo Ryong of chemistry at KAIST who studies porous catalytic materials.