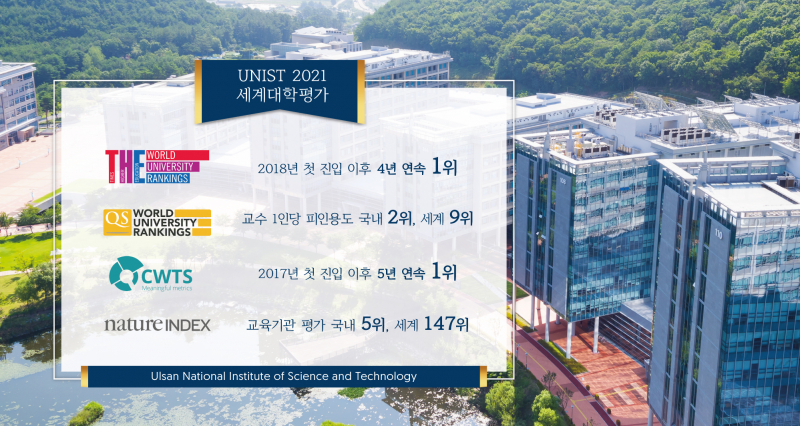 《Editor’s Note: UNIST has gotten worldwide attention once again due to its continued solid performance in the global university rankings. UNIST has maintained its position as South Korea’s No. 1 university for five consecutive years, according to the latestCentre for Science and Technology Studies (CWTS) Leiden Ranking. It also retained its position as Asia’s 21st best university in 2021 Higher Education (THE) Asia University Rankings. Below is a compiled list of those achievements. 》

UNIST has been ranked 8th in S. Korea and 212th globally in the latest QS World University Rankings by Subject, released on June 8, 2021. The 2022 edition of QS World University Rankings was the largest ever published by QS, with 1,300 institutions featured overall. Although the overall performance was unsatisfactory, UNIST achieved a full score for Citation per Faculty, which indicates research excellence. UNIST, in terms of citations, ranked as the world’s 9th best university. It has also been ranked No. 2 in S. Korea, following GIST. 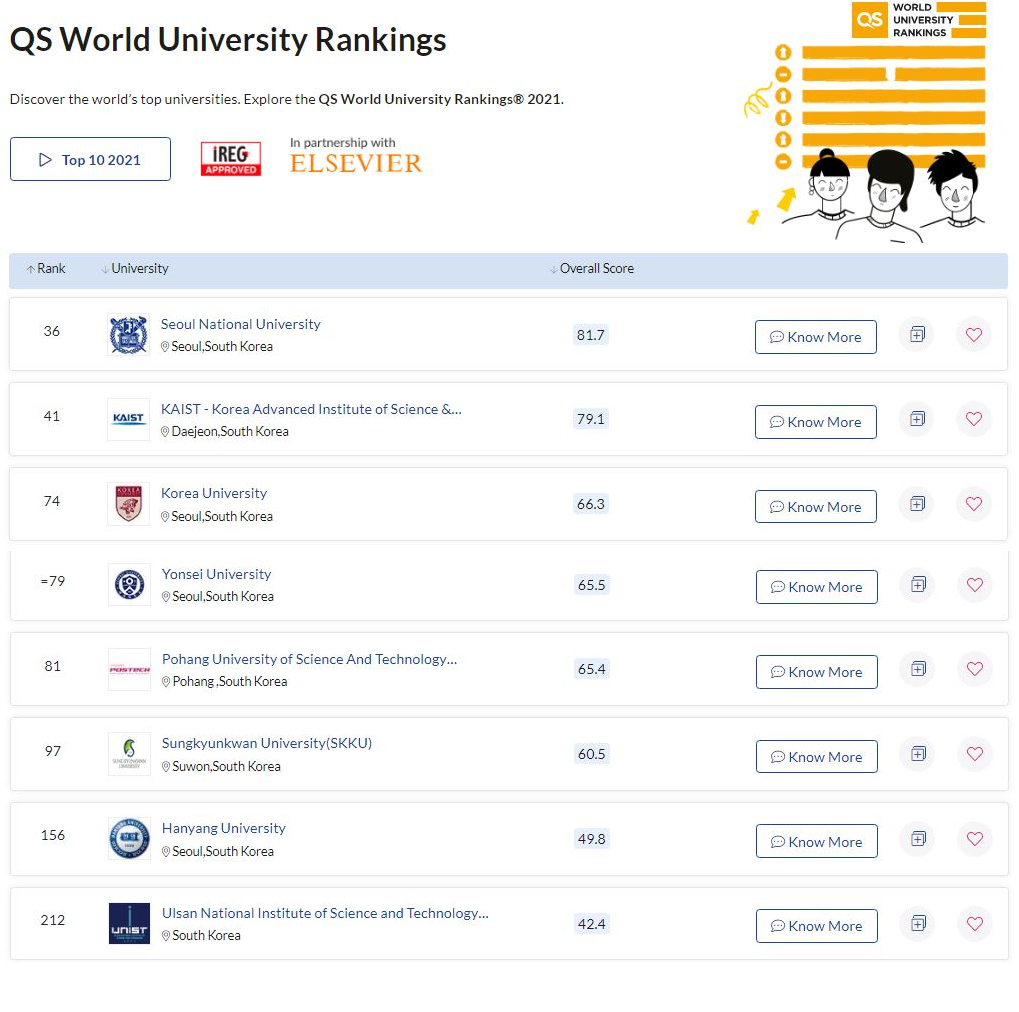 UNIST continues to be recognized as an elite engineering and science school worldwide, according to the latest Centre for Science and Technology Studies (CWTS) Leiden Ranking. In the size-independent ranking (based on the proportion of publications that belong to the top 10 % most cited and a minimum output of 100 papers), UNIST is ranked first in South Korea, followed by KAIST and POSTECH.

Released on June 2, the 2021 edition of Leiden Ranking evaluated about 1,225 universities from 69 different countries. The Leiden group found that 13.7% of UNIST publications were among the top 10% most widely cited of all scientific publications during the time period studied, 2016 to 2019. Besides, the ranking also reported that about 1.4% of UNIST’s publications during that period belong to the top 1% of highly cited papers. 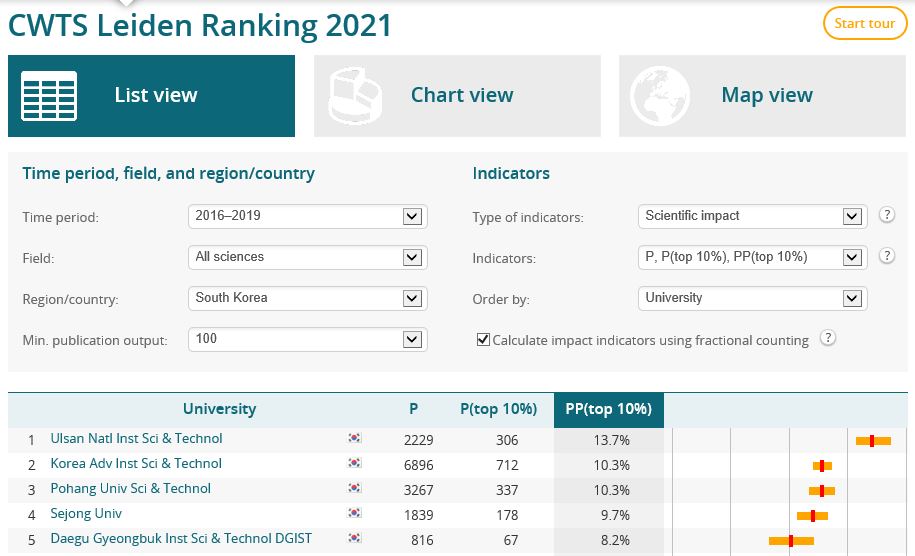 UNIST retained its position as Asia’s 21st best university, according to the latest Times Higher Education (THE) Asia University Rankings. The 2021 edition of THE Asia University Rankings use the same 13 performance indicators as the THE World University Rankings, but they are recalibrated to reflect the attributes of Asia’s institutions. UNIST, in terms of citations, earned a score of 90.8, which was the highest score ever achieved by universities in S. Korea. 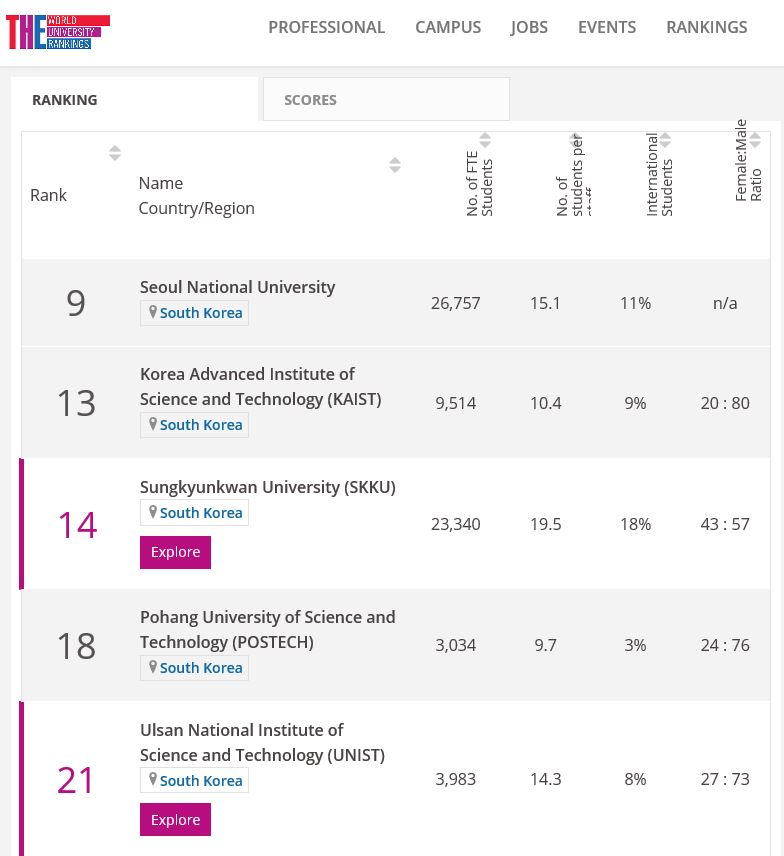 UNIST ranked 5th in South Korea and 147th globally in this year’s Nature Index Annual Tables for academic institutions. The 2021 edition of Nature Index tables, released on May 20, are based on an institution’s or country’s share of articles published in the 82 prestigious scientific journals, selected by an independent panel of experts in their fields. 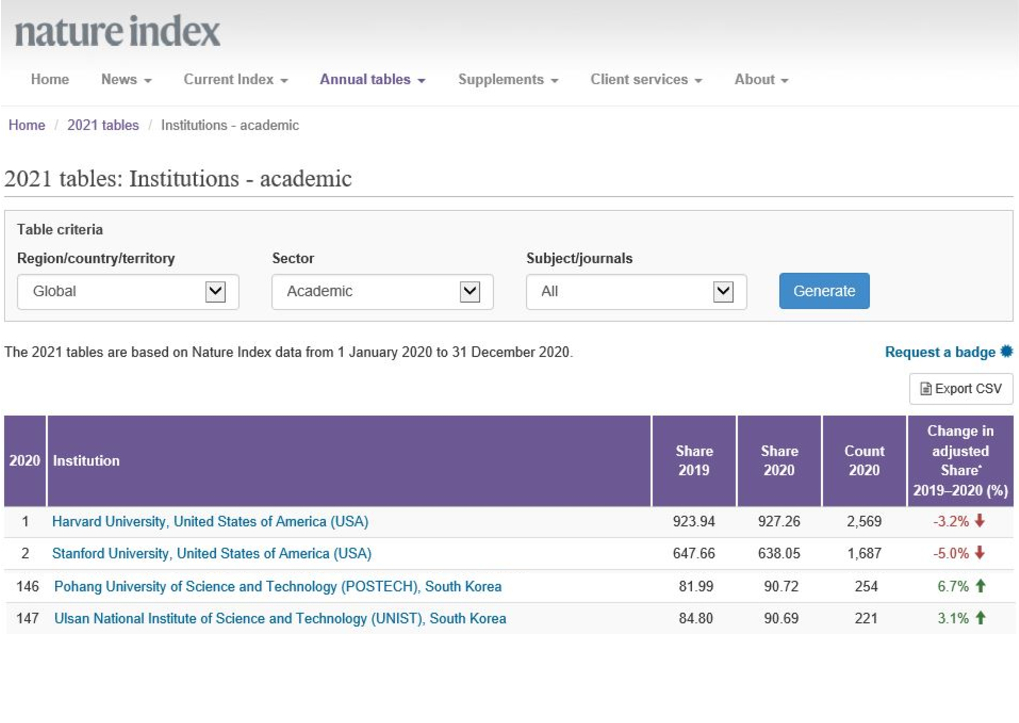