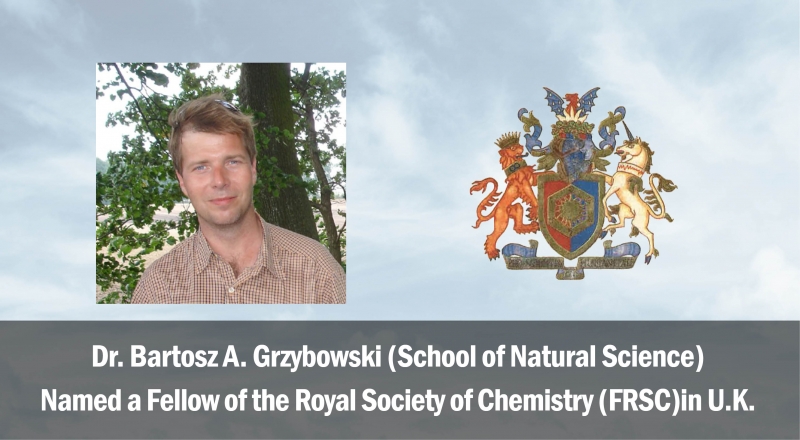 A Fellow of the Royal Society, the UK’s national academy of science

The Royal Society of Chemistry is the largest organization in Europe for advancing the chemical sciences. To be eligible for fellow status, members of the Royal Society of Chemistry must have a minimum of five years of professional experience and made an outstanding contribution to the advancement of chemical sciences. Achieving fellow status denotes a high level of accomplishment as a professional in the field.

As a Fellow, Dr. Bartosz A. Grzybowski is entitled to use the designatory letters FRSC, after his name. He will be included in a list of recently Fellows, which will be published in The Times (London) newspaper in the near future.

Dr. Bartosz A. Grzybowski, FRSC, formerly of Northwestern, joins the UNIST faculty in 2014 as a Distinguished Professor of Chemistry. Dr. Grzybowski, FRSC, graduated summa cum laude from Yale and with a Ph.D. in chemistry from Harvard. In addition to this new honor, Dr. Grzybowski is the recipient of many ACS, AICHE, RSC, DChG awards and also of the worldwide 2013 Nanoscience Prize, as well as a founder of a few biotechnological companies with total capital estimated at half a billion dollars. He is also the author of over 200 publications in chemistry, physics, and biology, including 20 articles in Science and Nature with nearly 10,000 citatations.

Established in 1841, the Royal Society of Chemistry has over 51,000 members around the world. The purpose of the organization to foster growth and application of chemical society by the dissemination of chemical knowledge; to serve in an advisory role for the public in matters relating to the science and practice of chemistry; and to established, uphold and advance the standards of qualification, competence, and conduct of those who practice chemistry as a profession.