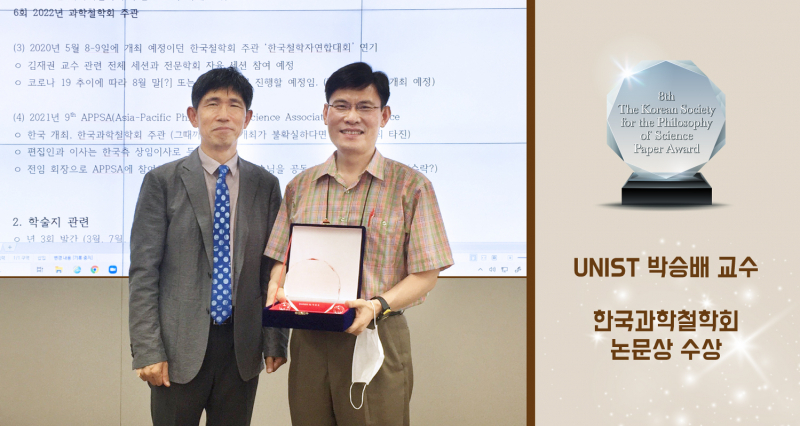 Seungbae Park, Professor in the Division of General Studies at UNIST has been recognized for research excellence in the field of philosophy of science.

On July 1, Professor Park awarded with the Outstanding Paper Award at the 8th Annual Conference of Korean Society for the Philosophy of Science, which took place at Jeonbuk National University.

The Korean Society for the Philosophy of Science once every two years honors a select number of members with awards for their research works in the field of philosophy of science, which have appeared in both international and domestic journals. This year, Professor Seungbae Park (Division of General Studies, UNIST) and Professor JungMin Lee (Hankyong National University) have been selected as the “Best Paper Award” winners for the 8th Annual Conference of Korean Society for the Philosophy of Science.

The award-winning paper by Professor Seungbae Park (In Defense of Realism and Selectivism from Lyons’s Objections) was published in the SCI-indexed journal, Foundations of Science in 2019. In this paper, Professor Park advocates scientific realism and criticizes scientific anti-realism.

“Those who are scientific realists assert that our best theories of modern science (Special theory of relativity, Big-Bang theory, Evolution, etc.) are believed to be true,” says Professor Park. “On the other hand, scientific anti-realists point out that theories, such as the phlogiston, caloric and aether theories were considered to be the most compelling in the history of science, yet were abandoned later on.”