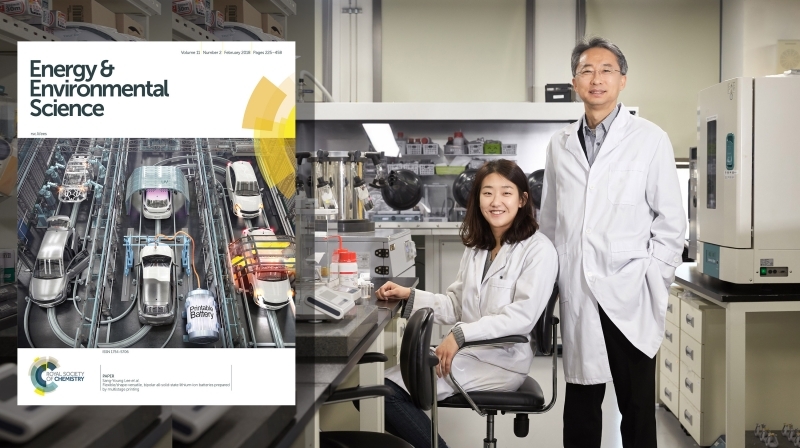 Their work has been published in the February 2018 issue of Energy Environmental & Science.

A recent study, affiliated with UNIST has introduced a new class of highly flexible battery with excellent thermal stability and fire resistance. These batteries still maintain excellent performance even when they cut with scissors or twisted exccessively, according to the research team. This technology has gained much attention around the globe, as it could one day lead the way for the creation of electric vehicles (EVs) and Internet of Things (IoT).

This breakthrough has been led by Professor Sang-Young Lee and his research team in the School of Energy and Chemical Engineering at UNIST.  The findings of this study has been selected as the front cover of the February 2018 issue of Energy & Environmental Science (EES), a world-renowned scientific journal published by the Royal Society of Chemistry.

In the study, the research team introduced a new class of flexible/shape-versatile bipolar all-solid-state LIBs via ultraviolet (UV) curing-assisted multistage printing, which does not require the high-pressure/high-temperature sintering processes adopted for typical inorganic electrolyte-based all-solid-state LIBs.

Instead of inorganic electrolytes, a flexible/nonflammable gel electrolyte consisting of a sebaconitrile-based electrolyte and a semi-interpenetrating polymer network skeleton was used as a core element in the printed electrodes and gel composite electrolytes (GCEs, acting as an ion-conducting separator membrane).

This study has been supported by Basic Science Research Program through the National Research Foundation of Korea (NRF), funded by the Ministry of Science and ICT (MSIT), Wearable Platform Materials Technology Center, as well as Korea Forest Research Institute.