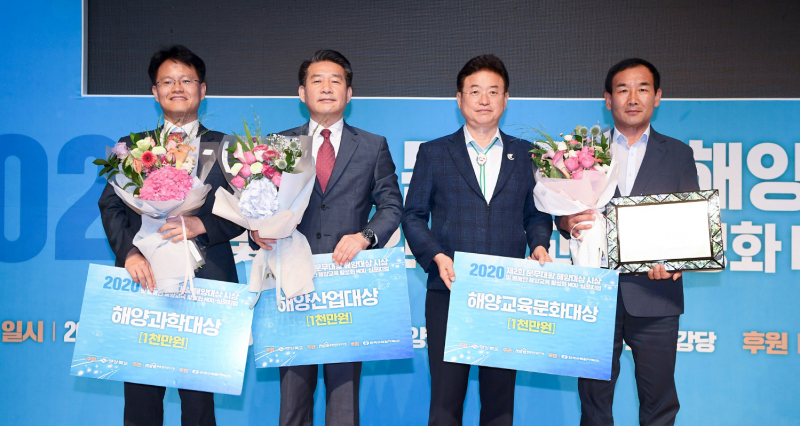 Youngsik Kim, Professor in the School of Energy and Chemical Engieering at UNIST has been selected as a recipient of the 2020 King Munmu Marine Award by North Gyeongsang Province.

The winners were honored at the annual King Munmu Marine Award Presentation Ceremony, which took place at Korea Institute of Ocean Science and Technology (KIOST) on July 31, 2020. At the ceremony, held to mark the commemoration of Ocean Day, three main prizes and special prizes were bestowed upon the winners, including Professor Kim.

Established in 2019, the King Munmu Marine Award is bestowed upon scientists in recognition of their contributions to marine sciences, marine industry, as well as marine education and culture. The primary purpose is to broaden people’s interest and understanding of the ocean and to promote the East Coast of GyeongBuk Province.

Professor Kim was named as a winner in the ‘Marine Sciences’ category. This award has been presented to Professor Kim in recognition of his research achievements in the field of environmental-friendly ocean energy. In particular, he was recognized for first developing and proposing the rechargeable seawater batteries for marine application. Professor Kim has been developing an electric storage device that uses seawater – infinite resource, as cathode materials, and conducting further studies to demonstrate this.

In particular, he was highly praised for his efforts to secure core source technology, such as registering more than 50 patents related to seawater battery, and for being actively engaged in R&D demonstration projects and aiming for commercialization through joint industry-academia collaboration.

Meanwhile, seawater batteries use earth-abundant seawater (sodium) to generate electricity. Therefore, they are much cheaper and more environmentally friendly than lithium and will, therefore, offer a low-cost route to large-scale energy storage. This makes this system an attractive supplement to existing battery technologies, thus leading the energy storage system (ESS) market. Research and development for commercialization is also steadily progressing at UNIST. Besides, a dedicated research center, namely Seawater Resources Technology Research Center which that will further expedite the commercialization of low-cost, eco-friendly rechargeable batteries that can produce and store electricity via seawater is currently under construction and will open in September 2020.