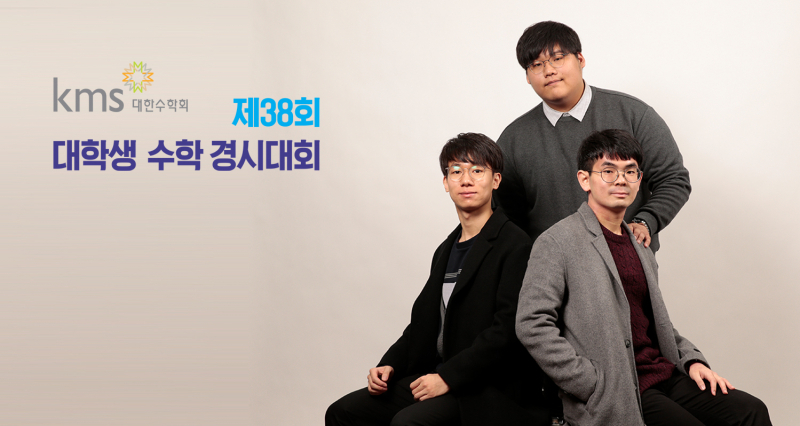 Three UNIST undergraduate students have been recognized with excellent results at the 2019 Mathematics Competition for University Students. From left are JongMin Choi, JaeHyeok Lee, and Gyeong Won Oh.

Three UNIST undergraduate students have been recognized with gold and silver medals at the 38th KMS Math Competition.

Three UNIST undergraduate students have been recognized with excellent results at the 2019 Mathematics Competition for University Students.

Held by the Korean Mathematical Society, the competition took place on Saturday, November 9, 2019. It is aimed at university students throughout the country. The competition is divided into two fields: One for those with mathematics majors and the other for the non-mathematics majors. Each field awards the highest scoring eligible student and students scoring in the top 5% of all competitors will be given the gold prize.

JaeHyeok Lee and JongMin Choi, the recipients of silver medal, are in the second year of university this year. Interestingly, both students are the winners of the “1st UNIST Mathematical Competition”, took place last year. At that time, JongMin Choi won the gold medal and JaeHyeon Lee won the bronze medal.

The three students will continue their attempts to develop mathematical proficiency through both in and outside the classroom. They agreed that such challenges would be of great help in any field.

Meanwhile, the award ceremony for the competition will be held in Seoul on December 23, 2019. Winners will be given prizes and monetary gifts. All first place winners of each category will be given one million won prize each. The Korean Mathematical Society holds a mathematics competition every year for university students. For those who wish to participate can apply via its website during the appropriate time period.