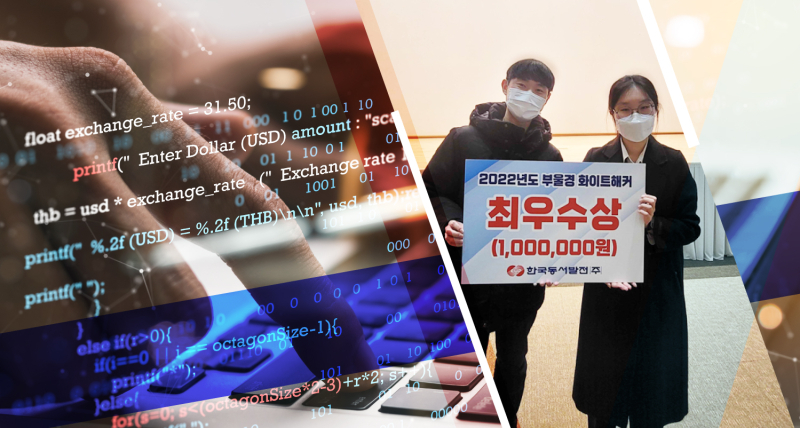 SeoHyeon Lee (right) and SeungMin Lee (left) in the Department of Computer Engineering at UNIST have been honored with the Grand Prize at the 2022 Final Results Presentation for White-Hat Hacker Incubation Project in Busan-Ulsan-South Gyeongsang Province. l Design: HyeJee Park

The Department of Information and Biomedical Engineering has announced that a group of its students has recently been honored with the Grand Prize at the 2022 Final Results Presentation for White-Hat Hacker Incubation Project in Busan-Ulsan-South Gyeongsang Province. Students being awarded were SeoHyeon Lee and SeungMin Lee in the Department of Computer Engineering at UNIST.

Korea East-West Power Company has been carrying out the White-Hat Hacker Training Project in the Busan-Ulsan-South Gyeongsang Region, jointly with the National Intelligence Service (NIS), and the Convergence Security Engineering Center of the Catholic University of Pusan in order to foster  information security specialty talents.

They started the selection process for participant recruitment over the last six months, starting from June 2022. As a results, 33 students from eight universities in Busan, Ulsan, and South Gyeongsang Province were selected for participation. Students carried out various research projects related to information security, including 200 hours of professional education, job experience, and participation in cyber attack defense competitions. SeoHyeon Lee and SeungMin Lee formed a team under the guidance of Professor Yuseok Jeon in the Department of Computer Engineering at UNIST. Throughout the project, they conducted vulnerability analysis and evaluation, and found a total of eight security vulnerabilities in the public information systems. In recognition of their achievement, they won the Grand Prize, along with KRW 1 million in prize money.

The two students first met at a hacking club, also known as HeXa―the only information security and programming society of UNIST. They took part in the competition, while working as undergraduate researchers in Professor Jeon’s lab. Ms. Lee from the HeXa’s CTF team is preparing for a special kind of information security competition, called the Catch the Flag (CTF)* competition, together with students from who dream of become white-hat hackers.
*CTF (Catch the Flag): A hacking competition in computer security. It competes who finds the hidden information first. It consists of discovering security vulnerabilities in programs or decrypting them.

Meanwhile, YeChan Park from the School of New UNISTars, who is also leading the HeXa’s CTF team, recently accomplished the splendid feat of being selected as the only outstanding participant from the P4C 5th Web Hacking. The P4C is an intermediate white-hat hacking course, jointly hosted and organized by the TeamH4C, one of the best teams in the field of information security in Korea, as well as the Best of the Best (BoB), the next-generation security leader training program. Mr. Park has also been working as an undergraduate research student under Professor Jeon. He will be joining to the Department of Computer Engineering to embody his career as an information security expert. The three students are considering participating in the next-generation security leader training program Best of the Best in the future, and are developing their dream of becoming a white hacker who will shine Korea by communicating and growing together at UNIST.