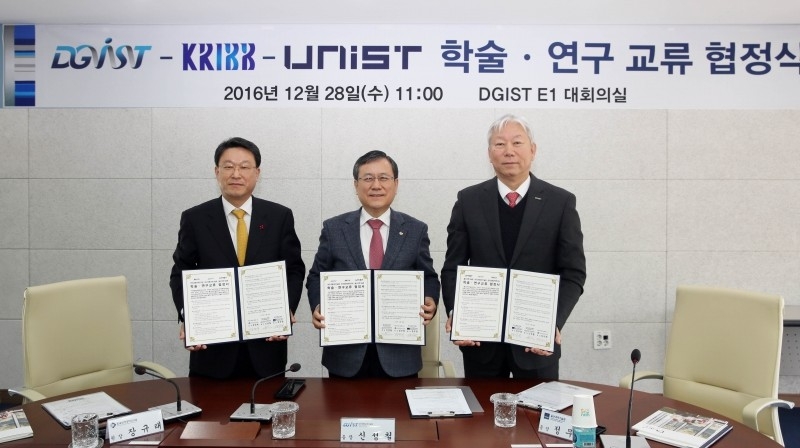 UNIST to Collaborate on Finding Secrets to Living ‘Well Beyond 100’

UNIST partners with DGIST and KRIBB on longevity research.

The world is graying at a break-neck pace and by 2030, South Korea will be among 34 nations expected to be ‘super-aged’ where more than 20% of the population is over 65.

The primary purpose of this MOU ceremony was to pledge mutual support for one another in the pursuit of the secret to longevity that would enable an individual live beyond 100 years and how to pass it on to offspring.

The official MoU Signing Ceremony among UNIST, Daegu Gyeongbuk Institute of Science and Technology (DGIST), and the Korea Research Institute of Bioscience and Biotechnology (KRIBB) was held at DGIST on December 28, 2016.

As the aging progresses, cognitive ability and mobility are weakened due to the deterioration of nerve cells, muscle cells, and metabolic diseases are caused by lowering of basal metabolism. Through this partnership, three organizations will identify molecules and proteins that induce such changes in the body, reveal the cause of aging, and develop early detection, treatment, and control of diseases related to aging. 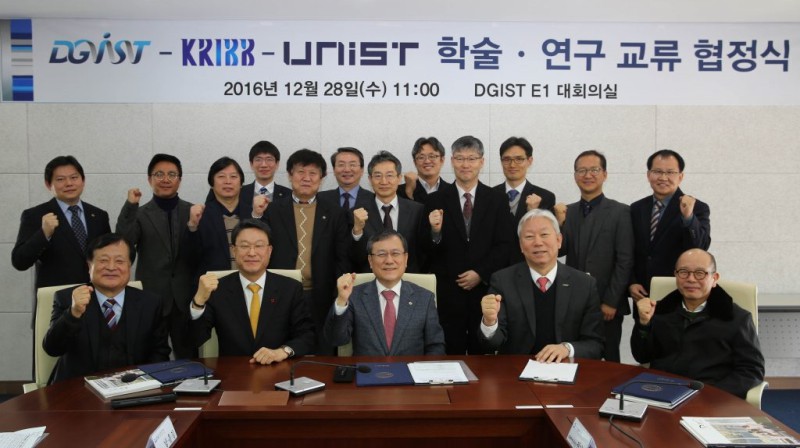 Attendees from the signing ceremony for cooperation MOU among UNIST, DGIST, and KRIBB are posing for a group photo at UNIST.

In order to share the standardized samples, these organizations plan to establish “Aging Specimen Bank (tentative name)” by collecting laboratory animals and human cells studied by each organization. And based on their findings, they have presented the standardized molecular indicators of aging symptoms.

“The need for aging research in Korean soceity appears more critical than ever before,” says UNIST President Mooyoung Jung. “Through the identification of the root cause of aging and the development of aging control technologies, we will broadly examine our tasks to respond to the super-aging society.”

UNIST also plans on developing the “Aging Molecule Analysis Center” in the first half of 2017. The center will analyze the molecules that cause aging and will examine the principles and processes that cause aging based on UNIST’s molecular imaging and analytical techniques.