The work by Distinguished Professor Bartosz A. Grzybowski was published online and will be included in the October 2022 issue of Nature Physics.

The work by Distinguished Professor Bartosz A. Grzybowski has been published in Nov. 2022 and selected as the cover article for Nature Physics.

Historically, contact electrification (CE) was humanity’s first and only source of electricity up until ca. 18th century yet its true nature is still elusive. Today it is considered a core component of technologies such as laser printers, LCD production processes, electrostatic painting, separation of plastics for recycling, etc., as well as a major industrial hazard (damage to electronic systems, explosions in coal mines, fires in chemical plants, etc.) due to electrostatic discharges (ESD) accompanying CE. In a vacuum, ESDs of a simple adhesive tape are so powerful that they generate enough X-rays to take an X-ray image of a finger [Nature 455, 2008, 1089–1092].

For the longest time, it was assumed that two contacting/sliding materials are charging oppositely and uniformly. In the 1940s though it was observed that each of the separated surfaces is carrying both, (+) and (-) charges, after CE. The creation of so-called charge mosaics was attributed to the irreproducibility of experiments, inherent inhomogeneities of contacting materials, or a general “stochastic nature” of CE.

A research team, led by Professor Bartosz A. Grzybowski (Department of Chemistry) from the Center for Soft and Living Matter, within the Institute for Basic Science (IBS) at UNIST has investigated the possible sources of charge mosaics for over a decade. Published in the November 2022 issue of Nature Physics, this study is expected to help control the potentially harmful electrostatic discharges.

Figure 1. Charge mosaics on contact-charged dielectrics. (a) In a conventional view, two electrically neutral materials (grey) brought into contact and then separated charge uniformly (lower left), one positive (red) and one negative (blue). In an alternative scenario (lower right), each surface develops a highly non-uniform ‘charge mosaic’ with neighboring domains of opposite charge polarities. (b) Collage of charge mosaics reported in the literature (the years and scale bars are indicated).

“In our 2011 Science paper [Science 333, 2011, 308–312], we showed sub-micrometer-scale charge non-uniformity of unknown origin. At that time, our hypothesis was to attribute these (+/-) mosaics to the transfer of microscopic patches of materials between the surfaces being separated. However, over many years of work on the problem, this and related models were simply not holding up, as it was gradually becoming unclear to us (and many other colleagues with whom we discussed) how these microscopic patches can explain even millimeter-scale regions of opposite polarity coexisting on the same surface. Nonetheless, we and the community had no better answer why the (+/-) mosaics are seen at all and over so many length scales,” says Professor Grzybowski.

In the paper published recently in Nature Physics, the group of Professor Grzybowski shows that charge mosaics are a direct consequence of ESD. The experiments demonstrate that between delaminating materials the sequences of “sparks” are created and they are responsible for forming the (+/-) charge distributions that are symmetrical on both materials.

“You might think that a discharge can only bring charges to zero, but it actually can locally invert them. It is connected with the fact that it is much easier to ignite the ‘spark’ than to extinguish it,” says Dr. Yaroslav Sobolev, the lead author of the paper. “Even when the charges are reduced to zero, the spark keeps going powered by the field of adjacent regions untouched by this spark.”

The proposed theory explains why charge mosaics were seen on many different materials, including sheets of paper, rubbing balloons, steel balls rolling on Teflon surfaces, or polymers detached from the same or other polymers. It also hints at the origin of crackling noise when you peel off a sticky tape – it might be a manifestation of the plasma discharges plucking the tape like a guitar string. Presented research should help control the potentially harmful electrostatic discharges and bring us closer to true understanding of the nature of contact electrification, noted the research team. 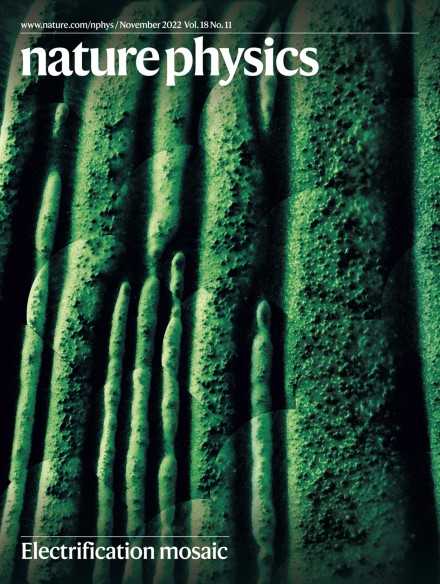 The work by Distinguished Professor Bartosz A. Grzybowski has been featured as a cover page of the November 2022 issue of Nature Physics.