UNIST will open its doors to the public in celebration of its 10th anniversary of opening and 12th anniversary of establishment. Under the topic of “UNIST Builds its 10th Bridge”, it plans to offer a variety of events and things to see, do, and enjoy during this 9-day event.

UNIST, which opened in 2009, will be holding a public event to express appreciation for the support of its citizens. The event will be held from May 17 to 25 on campus for nine days and at the Ulsan Grand Park between June 1 and 2, 2019. In particular, from May 17 to May 25, UNIST will host the ‘Open University Week’ event for the general public to explore more about its scientific laboratories and facilities.

The theme of this commemorative ceremony is ‘Ten-year-old UNIST builds its 10th bridge’. The new bridge is a hypothetical one, continuing from the previously built 9 Bridges on campus. These bridges were built to celebrate and recognize the accomplishments of those highly intelligent, hard-working researchers that are equal to that of Nobel Prize Winners. The goal of this event is to strengthen its ties with the local community, thus establishing a bridge that connects its science, technology and innovation with its people.

“The opening and growth of UNIST have not been possible without the support of Ulsan citizens and local government,” says President Mooyoung Jung. “Mere words cannot begin to express our gratitude to everyone.” 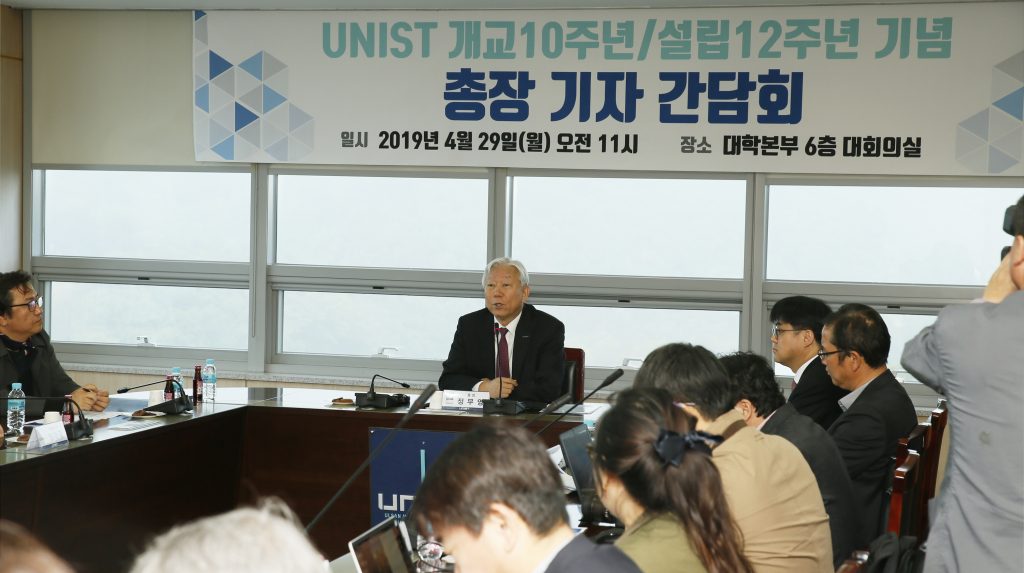 The main program of this event is ‘Open University Week’, starting from Friday, May 17, 2019. During the course of this event, local middle and high school students and the general public can register for a campus tour online via the online registration form located HERE. The event also features an exhibition hall to introduce and promote major research breakthroughs and other achievements undertaken at UNIST since its establishment 10 years ago.

On Tuesday, May 21, ‘KBS Open Concert with BNK Kyungnam Bank’ will be held from 7:30pm. KBS Open Concert, which visited UNIST in 2009 to celebrate its first anniversary, will revisit the campus to celebrate its 10th anniversary with Ulsan citizens. On May 24, the ‘Musical Gala Show Climax’ is scheduled to take place in the UNIST Gymnasium. Be among the first 500 to register online via UNIST homepage to receive free tickets.

The ‘Science Golden Bell Challenge’, aimed at elementary students will be held in the UNIST Gymnasium on Saturday, May 25, 2019. Besides, the “Startup Competition”, aimed at middle and high school students is scheduled to be held on the same day from 10:00 am to 5:00 pm at UNISPARK, an on-campus innovation space for student entrepreneurs at UNIST. Participants of both events can register online via the online registration form located HERE.

Special lectures in life sciences will take place on May 23, with Professor Jong Bhak (School of Life Sciences, UNIST), a representative genome researcher in S. Korea and Professor Seung Woo Cho (School of Life Sciences, UNIST), as the guest speakers. The lecture aims at discussing and solving all sorts of questions, related to human genes. The first 200 applicants, registered via UNIST homepage, will be given free admission tickets.

“Since its establishment, UNIST has consistently carried out ‘big impact research’ with ‘Emphasis on quality research’, thus has taken the lead in the new challenge of putting their ideas into practice and commercializing their results from the lab,” says President Jung. “Those efforts have recently been attended with a very great measure of success in various fields, such as research, start-ups and job creation and I can assure that you will experience all those via the Open University Week.”

UNIST, which started as a national corporate university in 2009 and transformed into a government-funded institute of science and technology in 2015, is a university specialized in science and technology. In a relatively short time, UNIST has established itself as a leader in research and education. UNIST has proved its research excellence by ranking 1st in South Korea for the second consecutive year in the CWTS Leiden Rankings. In terms of citations, UNIST retained the top position in South Korea and 48th place globally, according to the 2018 THE World University Rankings. Furthermore, in the 2018 edition of THE World’s Best Small Universities ranking that evaluates universities with fewer than 5,000 students, UNIST was ranked at 1st place in Asia and 6th place in the world.

Thus, as part of its efforts to promote the development of 14 outstanding and useful research brands that well-represent UNIST, researchers at UNIST are pushing forward to embark on the commercialization of its seawater battery, UniBrain (ternary semiconductor chip), and genome. Thus, their carbon dioxide removal cell system and catalytic technology for the production of high-performance hydrogen are also attracting attention in the scientific community in the industry. The number of startups founded by professors are 37, accounting for 10% of full-time faculty members and producing a myriad of benefits, including job creation.