Their findings appeared in the May 26th issue of the prestigious journal, Science Advances.

A recent study, affiliated with UNIST has developed a new type of polymer that will greatly advance the existing energy-harvesting technology that generates energy from wind, vibration, sound, and human-walking.

This breakthrough research has been led by Professor Jeong Min Baik of Materials Science and Engineering in collaboration with Professor Changduk Yang of Energy and Chemical Engineering at UNIST.

The new polymer, according to the research team, is able to accept more charges from an electrode, thereby enhancing the output performance of the triboelectric nanogenerator (TENGs) that is 20 times higher, compared with those of pristine polyvinylidene difluoride (PVDF)–based nanogenerator. A photograph of a PVDF-Gn–based TENG.

In their study, published in the May issue of the prestigious journal, Science Advances, the research team has presented a facile approach to enhance the output power of TENG with the successful synthesis of poly(tert-butyl acrylate) (PtBA)–grafted PVDF copolymers for dielectric constant control.

“For the pristine PVDF film, the dielectric constant is measured to be approximately 8.6,” says Professor Yang. “Following the principle that increasing the dielectric constant values can increase the electrical output power produced by the TENG, we decided to use the atom-transfer radical polymerization (ATRP) as an efficient dielectric to enhance the output performance of the TENGs.”

As a result, both the dielectric constant of the new polymer increased from 8.6 to 16.5, which resulted in a remarkable increase in the output of electrical power output, as well as a much faster charging property—the researchers found power output to be 20 times higher than pristine PVDF–based TENG. 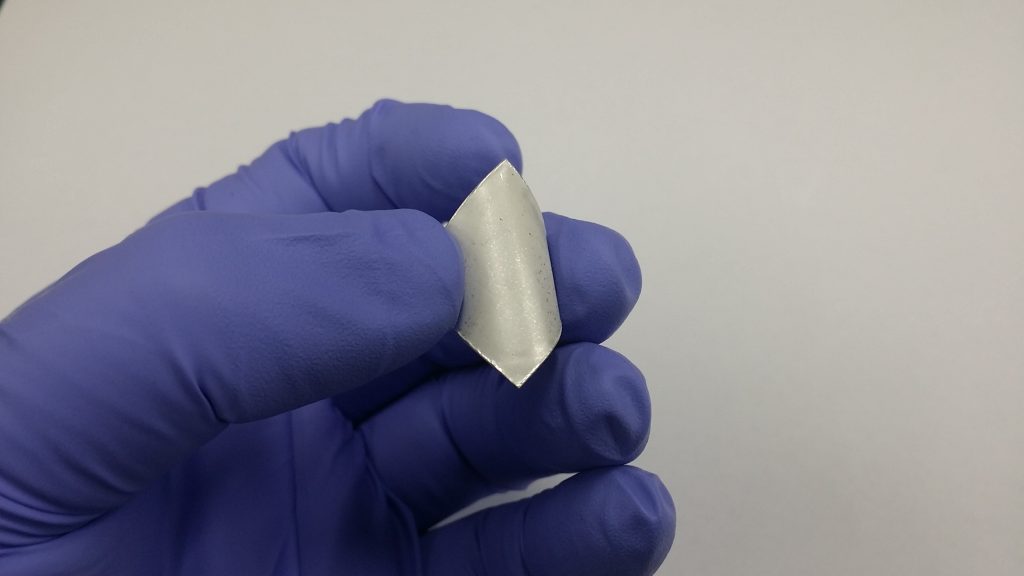 A photograph of a flexible PVDF-Gn film after it was peeled off.

Due to the high flexibility of the PVDF-Gn films, the research team reports, the enhanced output performance is also stable and reliable in harsh mechanical environments.

The findings of this work has been published in the May 26th issue of the journal, Science Advances. It has been supported by the Samsung Research Funding Center of Samsung Electronics.