The work by Distinguished Professor Rodney S. Ruoff has been published in Nature Nanotechnology on January 21, 2020.

An international team of researchers, led by Distinguished Professor Rodney S. Ruoff (School of Natural Science) from the Center for Multidimensional Carbon Materials (CMCM), within the Institute for Basic Science (IBS) at UNIST, has reported the fabrication and use of single crystal copper-nickel alloy foil substrates for the growth of large-area, single crystal bilayer and trilayer graphene films. Published in Nature Nanotechnology, the researchers noted that their work provides materials for the fabrication of graphene devices with novel functions that have not yet been realized.

The growth of large area graphene films with a precisely controlled numbers of layers and stacking orders can open new possibilities in electronics and photonics but remains a challenge. This study showed the first example of the synthesis of bi- and trilayer graphene sheets larger than a centimeter, with layers piled up in a specific manner, namely AB- and ABA-stacking.

“This work provides materials for the fabrication of graphene devices with novel functions that have not yet been realized and might afford new photonic and optoelectronic and other properties,” explained Distinguished Professor Ruoff, leading author of this study. Coauthor and Professor Won Jong Yoo of Sungkyunkwan University also noted that “This paves the way for the study of novel electrical transport properties of bilayer and trilayer graphene.”

For example, the same IBS research group and collaborators recently published another paper in Nature Nanotechnology showing the conversion of AB-stacked bilayer graphene film, grown on copper/nickel (111) alloy foils (Cu/Ni(111) foils), to a diamond-like sheet, known as diamane. Coauthor Pavel V. Bakharev notes that: “Less than one year ago, we produced fluorinated diamond monolayer, F-diamane, by fluorination of exactly the AB-stacked bilayer graphene films described in this new paper. Now the possibility of producing bilayer graphene of a larger size brings renewed excitement and shows how fast this field is developing.”

▲ Figure 1. Preparation and characterization of Cu/Ni(111) foils. (a) Schematic of the preparation of the Cu/Ni(111) foils shows that Ni films are electroplated on both sides of a Cu(111) foil, which is followed by heating in a chemical vapor deposition chamber at 1050 oC for 5-7 hours to obtain the Cu/Ni(111) foil. By controlling the concentration of nickel (Ni), IBS researchers could obtain bilayer and trilayer graphene with the desired stacking order and large area. (b) A photograph of a piece of Cu/Ni(111) alloy foil (3 cm × 5 cm in size). (c) X-ray pattern taken from different regions across the whole sample (3 cm × 5 cm). (d) Electron backscatter diffraction map indicating the uniform (111) orientation of the prepared Cu foils.

The right choice of substrate is essential for the correct growth of graphene. Foils made only of copper limit the growth of bilayer graphene and favor uniform monolayer growth. It is possible to obtain multilayer graphene sheets on nickel film, but these are not uniform, and tend to have small “patches” with different thicknesses. Finally, the commercially available foils that contain both nickel and copper are not ideal. Therefore, IBS researchers prepared ‘home-made’ single crystal Cu/Ni(111) foils with desired features, building further on a technique reported by the group in Science in 2018. Nickel films are electroplated onto copper(111)-foils so that the nickel and copper interdiffuse when heated and yield a new single crystal foil that contains both elements at adjustable ratios. Ruoff suggested this method and supervised Ming Huang’s evaluations of the best concentrations of nickel to obtain uniform graphene sheets with the desired number of layers.

In addition to extensive spectroscopic and microscopic characterizations, the researchers also measured the electrical transport (carrier mobility and band gap tunability) and thermal conductivity of the newly synthesized graphene. The centimeter-scale bilayer graphene films showed a good thermal conductivity, as high as ~2300 W/mK (comparable with exfoliated bilayer graphene flakes), and mechanical performance (stiffness of 478 gigapascals for the Young’s modulus, and 3.31 gigapascals for the fracture strength). 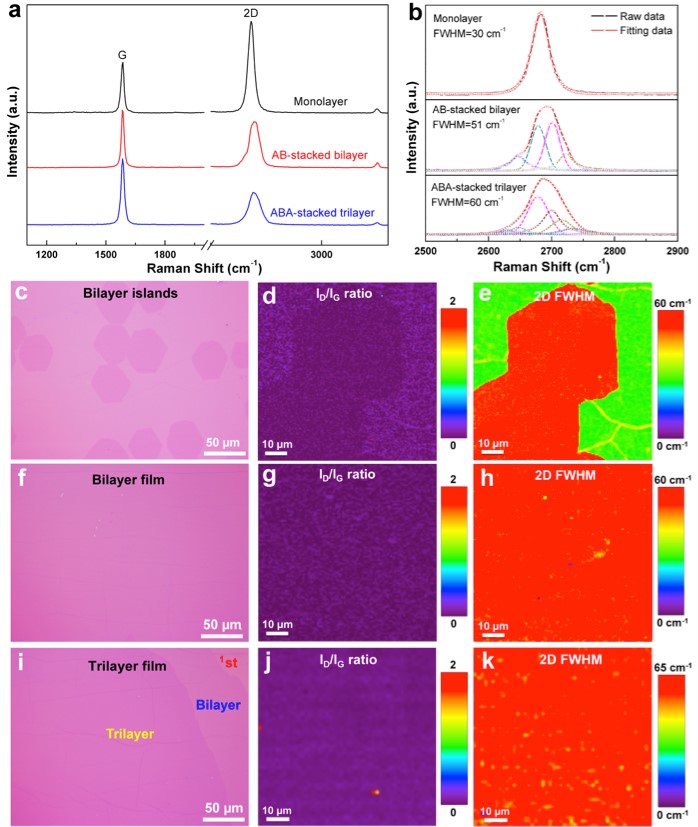 The team then investigated the growth stacking mechanism and discovered it follows the so-called “inverted wedding cake” sequence as the bottom layers are positioned after the top one. “We showed with three independent methods that the 2nd layer for bilayer graphene, and the 2nd and 3rd layers of the trilayer sheet grow beneath a continuous top layer. These methods can be further used to study the structure and stacking sequence of other 2D thin film materials,” noted Huang.

Professor Ruoff noted that these techniques for synthesizing and testing large-scale ultrathin films could stimulate worldwide interest in further experimenting with single crystal Cu/Ni alloy foils, and even in exploring fabrication and use of other single crystal alloy foils.

This research has been performed in collaboration with UNIST and Sungkyunkwan University. The findings of this research have been published in Nature Nanotechnology (IF: 33.407) on January 21, 2020.