Their findings have been published in PNAS on July 31, 2019.

Whether it is oil gushing through pipelines or blood circulating through arteries, how liquids flow through tubes is perhaps the most fundamental problem in hydrodynamics. The challenge is to maximize transport efficiency by minimizing the loss of energy to friction between the moving liquid and the stationary tube surfaces. Counterintuitively, adding a small amount of large, slow moving polymers to the liquid, thus forming a ‘complex liquid’, leads to faster, more efficient transport. This phenomenon was speculated to arise from the formation of thin layer around the internal wall of the tube, known as depletion layer or split layer, in which the polymer concentration was significantly lower than in the bulk solution. However, given the inherently thinness of this layer, which is only a few nanometers thick, on the order of the polymer size, direct experimental observation was difficult, and so progress in the field relied heavily on bulk measurements and computer simulations.

An international team of researchers, affiliated with UNIST, has made a significant advance in the field by successfully imaging the depletion layer in polymer solutions flowing through microchannels. Their study, published in the Proceedings of the National Academy of Sciences, USA, relied on the development of a novel super-resolution microscopy technique that allowed the researchers to see this layer with unprecedented spatial resolution.

This breakthrough has been led by Professor John T. King (School of Natural Sciences) and his research team from the Center for Soft and Living Matter, within the Institute for Basic Science (IBS) at UNIST. 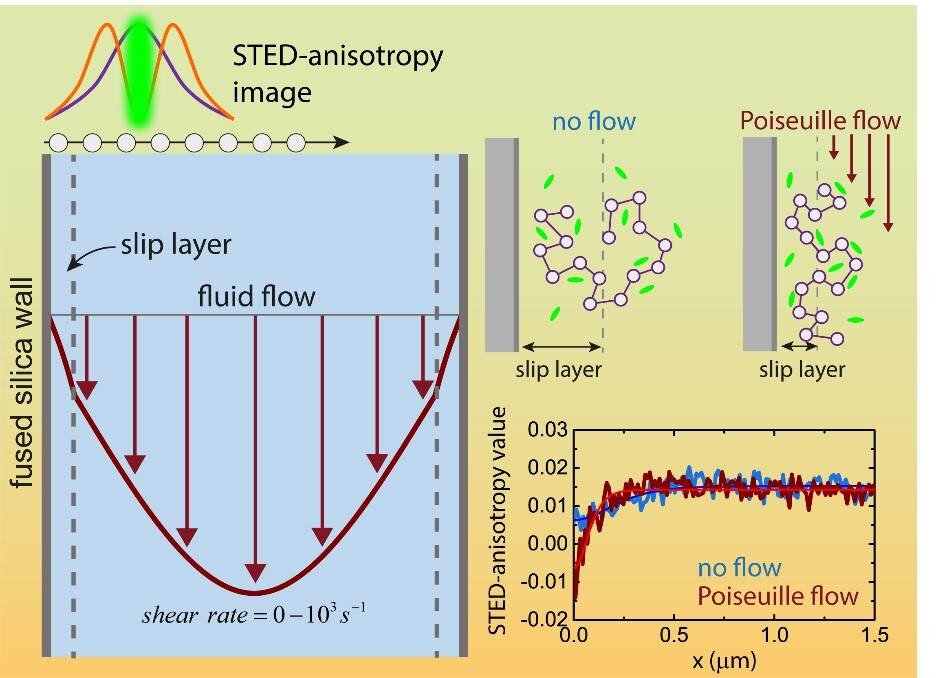 ▲ Figure 1: Graphic summary of the study. As indicated by the dark red arrows, fluid flowing through a narrow cylindrical pipe moves at different speeds: faster near the center of the tube than at the edges (Poiseuille flow). The layer in contact with the internal surface of the pipe is known as slip layer or depletion layer, and allows the bulk fluid to ‘slip’ past the walls more efficiently. The IBS team developed a new technique (STED-anisotropy) to experimentally measure what happens directly at the slip layer, and characterized changes to the depletion layer dimension and composition as a function of flow rate. Careful analysis of polymer relaxation times shows that above a critical flow rate, shear forces lead to the elongation and alignment of the polymer (chain with white beads) along the direction parallel to the flow.

The first observation of this phenomenon was made nearly a century ago. Experimental studies on high molecular weight polymer solutions revealed a puzzling observation: there was an apparent discrepancy between the measured viscosity of the polymer solution and the rate at which it flowed through a narrow tube. The polymer solution would always flow faster than expected. Furthermore, the narrower the tube, the larger this discrepancy. This sparked an interest which persists to this day.

“Depletion layer dynamics was a problem we found very interesting, but it was challenging to make progress with current experimental techniques,” says Professor John T. King (School of Life Sciences, UNIST), the corresponding author on the study. “We knew the first step needed to be the development of a technique that could provide new information.”

Using his expertise in super-resolution microscopy, Seongjun Park, the first author of the study, developed a novel adaptation of stimulated emission depletion (STED) microscopy that has sufficient spatial resolution and contrast sensitivity to directly observe depletion layers. At the same time, Anisha Shakya, the co-author of the study, applied her knowledge of polymer physics to optimize a suitable imaging system. The team decided that the best approach would be to apply the newly developed STED-anisotropy imaging to a solution of high molecular weight polymer, polystyrene sulfonate (PSS), flowing through 30 μm-wide silica microfluidic channels.

PSS’ behaviour was tracked with the help of fluorescent dyes. Transient interactions between the side-chains of PSS and the dye slow the rotational movement of the dye molecule. These small changes reveal PSS position and concentration with a spatial resolution of 10s of nanometers.

Surprisingly, it was also observed that changes to the depletion layer composition occurs at unexpectedly low flow rates. In particular, polymer segments are pulled away from the wall, leaving almost pure solvent, without polymers, close to the wall. This can be attributed to hydrodynamic lift forces, like aerodynamic lift in airplanes, that arise from asymmetric flow at the wall. While hydrodynamic lift has been well characterized in computer simulations, and observed in macroscopic systems, (for instance, flounders fight against this lift better than other animals due to their flatter shape), direct experimental observations on nanoscopic length scales have remained elusive.

It is anticipated that this promising approach can provide new information on complex fluids under flow in different regimes, such as turbulent flow, like what is seen in swiftly flowing rivers, or flow through nanofluidic devices.