The signing ceremony of MoU among UNIST, KIOST, and North Gyeongsang Province took place on May 22, 2020.

A new door has been opened for UNIST’s seawater battery technology, as it is expected to be utilized in many areas of the marine environmental studies in the islands of Ulleungdo and Dokdo.

On May 22, UNIST Seawater Resources Technology Research Center signed a Memorandum of Understanding (MoU) with the Ulleungdo-Dokdo Ocean Science Station of Korea Institute of Ocean Science and Technology (KIOST) and the North Gyeongsang Province to forge ahead toward achieving scientific excellence. In the memorandum of understanding, the three organizations have pledged cooperation for the development of deep ocean water resources in the islands of Ulleungdo and Dokdo.

Under this partnership, they have also agreed to expand technological cooperation in the creation of new maritime industries in the Pan East Sea region through efficient utilization of seawater resources of Ulleungdo and Dokdo islands. To this end, the three organizations agreed to reinforce their cooperation, such as joint use of research equipment and facilities and the exchange of professional personnel, academic materials, and other information. 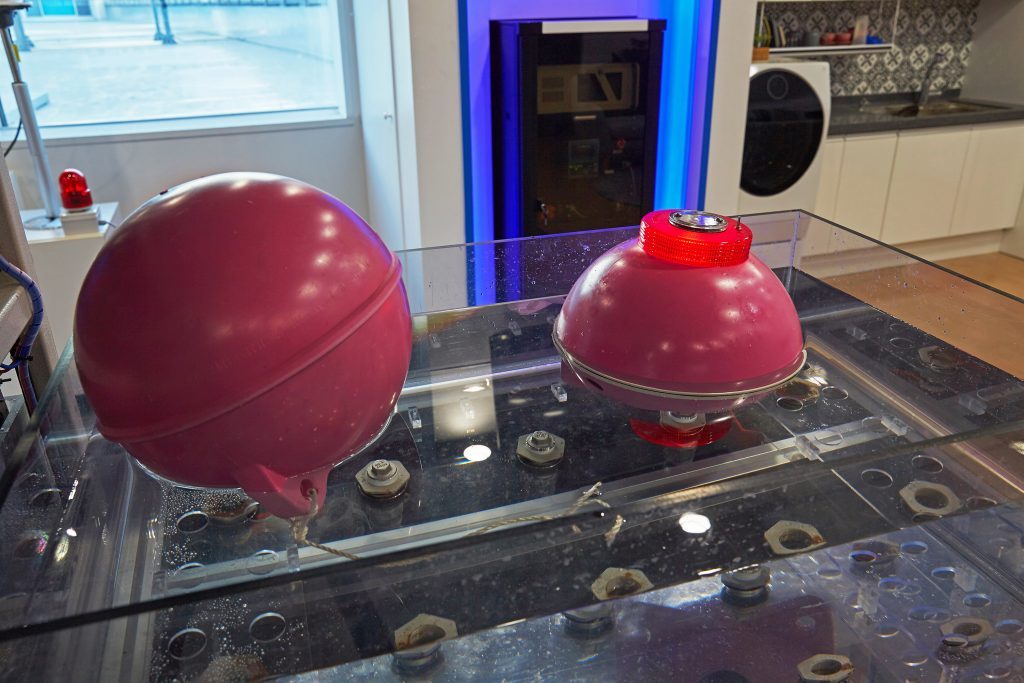 Seawater battery-based buoy, located at the Seawater Resources Technology Exhibition at UNIST. It can be charged by the sun. l Image Credit: Kyoungchae Kim

The cooperation is centered on UNIST’s seawater battery technology. This is a source technology developed by the UNIST Seawater Resources Technology Research Center with the support of the government and Ulsan City. Since seawater batteries use earth-abundant seawater (sodium) to generate electricity, the possibilities of application are endless. Work is currently underway to develop applications that use seawater batteries, which include marine specialized power supplies (seawater batteries), GPS buoys for energy independent fishing nets, and seawater desalination devices.

Both Ulleungdo and Dokdo islands have the fewest sunny days of any region in S. Korea, especially with less sunlight during winter months. For this particular reason, the existing marine meteorological observation buoys that are powered by solar cells, often experience difficulties during winter operation. However, the application of seawater battery technology to those buoys will allow excess electrical energy to be collected for later use and further contributes to efficient, reliable operations.

In addition to this, researchers anticipate that UNIST’s seawater battery technology offers a broader range of applications, such as GPS buoys to monitor surface layer currents, remote monitoring system for an open-sea aquaculture cages, as well as real-time underwater monitoring system for the islands of Ulleungdo and Dokdo.

“This agreement will be of great help for the R&D and field demonstration of seawater battery-powered smart buoys,” says Director Youngsik Kim of Seawater Resources Technology Research Center at UNIST. “We hope our seawater battery technology could help immensely with the research on the marine environment.”

“Through active collaboration, we will work to protect the Dokdo island, and at the same time invigorate marine industries in Pan East Sea area,” says Nam-il Lim, Head of the Pan East Sea Regional Headquaters in the province of North Gyeongsang.

Meanwhile, the Ulleungdo-Dokdo Ocean Science Station of KIOST was established in 2013 by the province of North Gyeongsang and Ulleung-gun in order to secure territorial sovereignty over the Dokdo island and to establish a research base for the sustainable development of marine resources in Ulleung Island. Since 2014, KIOST has consigned management operations of the real-time marine observation buoys and cage aquaculture facilities in the Ulleungdo and Dokdo areas, and now plans to construct a multi-purpose Ulleungdo-Dokdo marine research station vessel with the goal of launching in 2021.