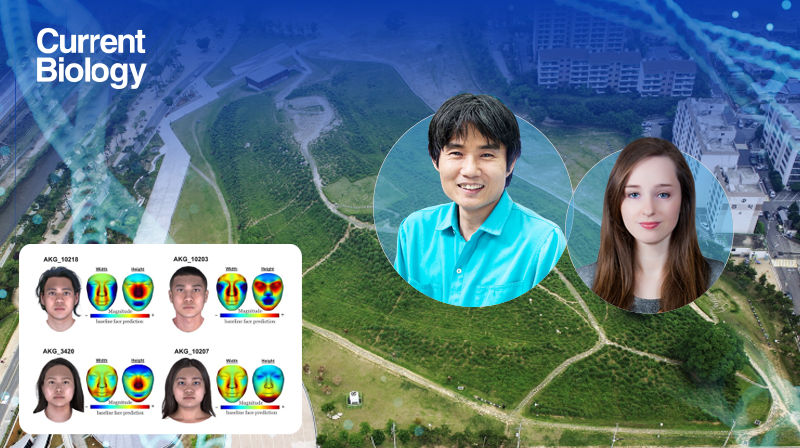 Their findings have been published online in the June 2022 issue of Current Biology.

Eight 1,700-year-old genomes dated to the Three Kingdoms period have shown that ancient Koreans from the Gaya confederacy were more diverse than the present-day Korean population. This study presents the first ever Korean genomes from the Three Kingdoms period, which is perhaps one of the most critical eras in Korean history in terms of the cultural and ethnic identity of modern-day Koreans.

The eight ancient skeletal remains used for DNA extraction and bioinformatic analyses came from the Daesung-dong tumuli, the iconic funerary complex of the Gaya confederacy, and from Yuha-ri shell mound; both archeological sites located in Gimhae, South Korea (See Figure 1). Some of the eight individuals were identified as tomb owners, others as human sacrifices, and one, a child, as a shell mound burial, all corresponding to the Gaya region funerary practices in AD 300-500. Figure 1. The general perspective of Three Kingdoms period archeological sites utilized in this study: geographical location and aerial images of the Daeseong-dong and Yuha-ri sites.

In exceptionally favorable conditions for DNA preservation (such as permafrost), the nucleotide sequence information can be preserved for over 100,000 years. In comparison, the human DNA in this study has been preserved in acidic Korean soil for 1,700 years. Gimhae National Museum that excavated and stored the bones, with a help of Ron Pinhasi, an ancient DNA extraction expert in Austria, collaborated with the National Museums of Korea, Seoul National University, UNIST, and Clinomics to extract, sequence, and analyze the DNA using the latest technologies.

Initially, the Pinhasi group extracted DNA from 27 samples (petrous bone and tooth) obtained from 22 sets of bones, however, only 8 of them resulted in high-quality genomic data (0.7× – 6.1× of sequencing coverage). These data were used for subsequent bioinformatics analysis. Kinship analysis determined the eight individuals to be unrelated.

Six out of eight ancient individuals were genetically closer to modern Koreans, modern Japanese, Kofun Japanese (Kofun genomes are contemporaneous with individuals from this study), and Neolithic Koreans. The genomes of the remaining two were slightly closer to modern Japanese and ancient Japanese Jomons. First, this means that in the past, genetic diversity in the Korean peninsula was greater than it is now, secondly, the results suggest genetic diversity in Gaya could be represented by at least the two aforementioned groups (We named them Korea-TK_1 and Korea-TK_2, respectively). Interestingly, there was no apparent link between the socio-economic status of an individual (being recognized as the tomb owner or the human sacrifice in the tomb) and one’s genetic lineage.

This study employed all the available ancient Korean genomic resources published to date. That consists of a handful of pre- Three Kingdoms period genomes dated to the Bronze Age and Mid-Neolithic periods sampled from the southern islands in the Korean peninsula. Some of the reported Yokjido and Gadeokdo genomes are known to be close to ancient Japanese Jomon lineage. This is relevant, because the eight Gaya individuals we studied also present this feature to an extent (not as a dominant genetic component), most likely in a form of genetic continuity. However, this can also be seen as evidence that the Gaya region maintained significant exchanges with the populations from the Japanese archipelago at that time.

Modern Koreans, on the other hand, appear to have lost this Jomon-related genetic component owing to the relative genetic isolation that followed the Three Kingdoms period. Their findings support a well documented post- Three Kingdoms period Korean history, suggesting that Koreans at that time were intermixing within the peninsula, and that their genetic differences diminished until the Korean population became homogeneous as we know it today.

As expected, the Three Kingdoms period Koreans from Gaya showed an overall strong genetic continuity into modern Koreans. A set of 160 forensically-relevant genetic markers related to phenotype confirmed there were no consistent differences in appearance with modern Koreans or between the two aforementioned groups. For example, all the ancient genomes from the study carried gene mutations responsible for dry earwax and lesser body odor, as well as brown eyes and dark, most likely black hair – standard East Asians traits that are also representative of ethnic Koreans. Even the features like hair thickness and the genetic predisposition to myopia appeared consistent with modern Koreans. Half of the Three Kingdoms period Koreans had mitochondrial haplogroup “D4”; and two of the three males had chromosome Y haplogroup “O”, both of which are the most prevalent lineages among modern Koreans. A detailed DNA-based face prediction for the eight genomes showed that the Three Kingdoms period Koreans resembled modern Koreans. This is the first instance of publishing an ancient individuals’ face prediction using DNA-only in a scientific journal (See Figure 2). Even though commercial (Parabon NanoLabs, Snapshot™) and originally used for forensic purposes in modern humans, this approach may create a precedent for other ancient genome studies to predict facial features when the skulls are extremely degraded, making it too complex to reconstruct, as happened in this case.

The findings indicate no significant genetic shift in the Korean peninsula for thousands of years. However, it is notable that all currently published ancient Korean genomes (including this), even though represent different time periods, are roughly from the same southeastern part of Korea, meaning they may not be sufficient to represent the entire genomic diversity of ancient Korea. To paint an accurate picture of the ancient Korean genetic diversity and its “evolution” into modern Korean demographics, it is necessary to analyze ancient genomes from the inland of the Korean Peninsula in the future, for example, focusing on Silla, Baekje and Goguryeo kingdoms.