Home All News News The 2016 UNIST Commencement and Matriculation 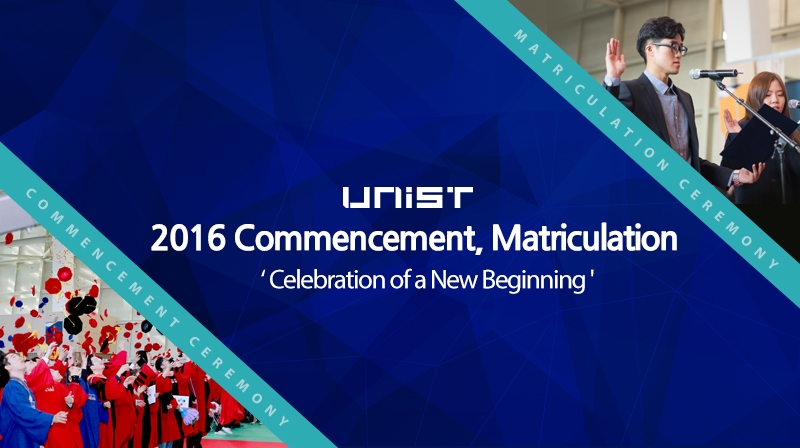 The 2016 UNIST Commencement and Matriculation

Each February, UNIST follows the tradition of festive academic ceremonies of matriculation and graduation.

On February 23, friends and family poured into UNIST Gymnasium to the sound of UNISTra’s musical performance to watch the graduation of their loved ones. This was the first convocation since the recent status change of UNIST, as a government-funded research institute.

Class of 2016 are throwing their mortarboards up in the air at 2016 Matriculation.

For all the UNIST graduating Class of 2016, President Jung states, “Class of 2016, as you graduate today, be proud that your alma mater UNIST will always be there with you in your new journey.” He adds, “Don’t be afraid to dream big, but remember that dreams without goals are just dreams.”

On the following day, at 11:00 a.m., before the 2016 Freshmen Orientation, inside UNIST Gymnasium was charged with energy and hope, as members of of the Class of 2020 officially began their undergdatuate journey at the annual Matriculation ceremony.

A total of 400 new undergraduate students were admitted in the presence of their family and professors who held witness to this important milestone. This year’s incoming freshmen are the first group of students, entering UNIST since its recent status change as a government-funded research institute.

At the opening ceremony, President Jung said “UNIST has nine bridges on campus with no assigned official names.” He continues, “We hope that one of you today will win a Nobel Prize and one of these bridges will be named after you.”