Home All News Research 5G Networking: From Smartphone to Smart Everything

5G Networking: From Smartphone to Smart Everything

With 5G networks, expected to be fully rolled out by 2020, many researchers believe that the commercialization of 5G will open a new era of so-called ICTnomics. This new tech will deliver five times faster response speeds and 10 to 100 times faster connection speeds than the average speed on 4G mobile networks.

With the aim of commercializing 5G by 2020, remote surgery, cloud streaming gaming, drones, and robots will be all envisioned in 5G to bring better access and life-changing futuristic services to many. While 5G is expected to offer extended battery life, low latency, and download speeds 1,000 times faster than the average speed on 4G mobile networks, it is still a long way from being used commercially.

A team of UNIST researchers announced that they have embarked on R&D initiatives to develop so-called “5G” technology, with a vision of providing zero latency and response times. This study is a collaboration amongst four scientists from the School of Electrical and Computer Engineering, including Prof. Changhee Joo, Prof. Hyoil Kim, Prof. Kyunghan Lee, and Prof. Hyun Jong Yang. 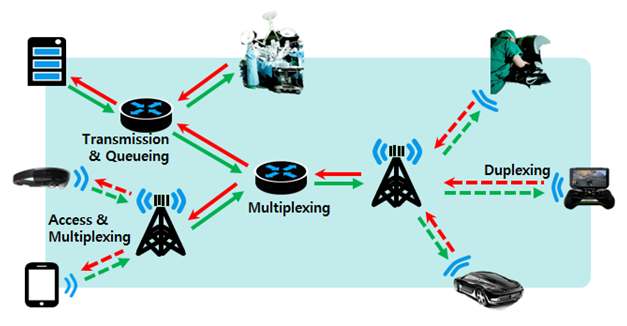 This study has been selected as one of national ICT R&D funded-projects, titled “Research on Near-Zero Latency Network for 5G Immersive Service.” It will be funded by the Ministry of Science, ICT and Future Planning, as of May 2015.

“It is a great honour to receive this funding,” says the research team. “By starting a five-year research project, we have taken a first step toward near-zero end-to-end latency, which propels us to commercialization of 5G.”

According to the research team, “Through this study, for the first time in the world, we will shed light on issues in every network hop of the end-to-end network, as shown in the figure above, to achieve a few milliseconds of the total latency.”