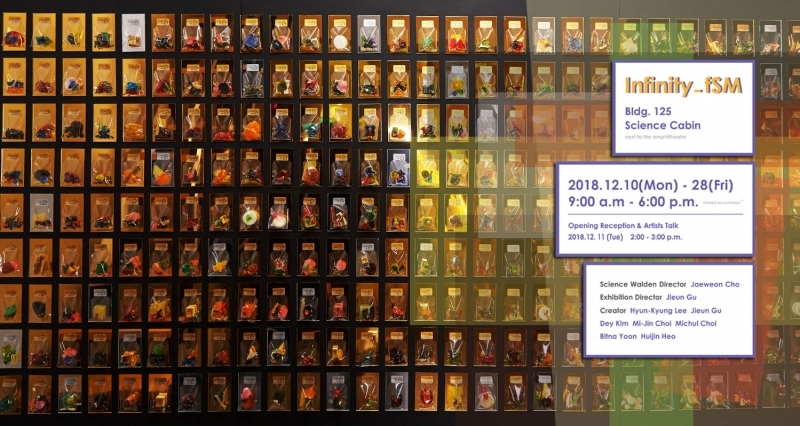 The Infinity_fSM exhibition will be held at Science Cabin from December 10 to 28, 2018. Shown above is 'Pong-Cha Showroom' by Huijin Heo.

[Science Walden Project] Infinity_fSM exhibition will be held at Science Cabin from December 10 to 28, 2018.

A new exhibition, dedicated to blending art and science, opens this week at Science Cabin, UNIST. Held under the theme of Infinity_fSM (Feces Standard Money), the show will explore the science of endless through the cycle of creating value by producing energy from human feces.

The exhibition started on Monday, December 10 and will be open from 9 am. to 6 pm. until December 28, 2018. An opening reception of the exhibition, which also included Artist Talk was also held at Science Cabin on Tuesday, December 11, 2018. 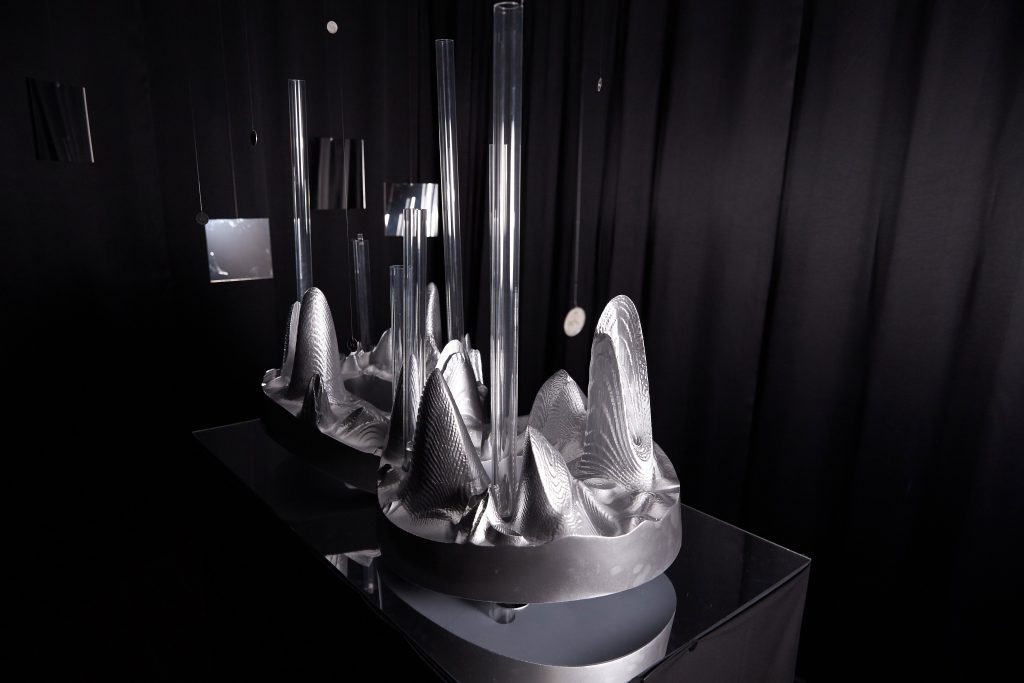 A total of nine works were displayed at the exhibition under the theme of ‘Infinity fSM (Feces Standard Money)’. Science Cabin, which was transformed into an exhibition space, showed unique works including installation work as well as sound and video art. Their works represented three themes: fSM, resource circulation, water pollution and water environment, and convergence and collaboration.

Artist Jieun Gu took charge of the entire exhibits and researchers participating in the Science Walden Project also partook in the event. The exhibition, which was planned in September, has been in preparation for more than three months. This includes idea planning, material selection, as well as the production process. Researchers used their own personal time to engage in this exhibition, after work.

At the opening ceremony held on Tuesday 11th, we had a time to introduce the works by participating in the exhibition, including Jieun Gu, Professor Hyun-Kyung Lee in the Division of General Studies at UNIST, Research Professor Mijin Choi, Daehe Kim, Michul Choi, Bitna Yoon, and Huijin Heo.

“Like the exhibition theme ‘Infinity fSM’, there is an endless charm in creating values by producing energy from human feces,” says artist Jieun Gu. “We strived to look at and express fSM like living creatures.” 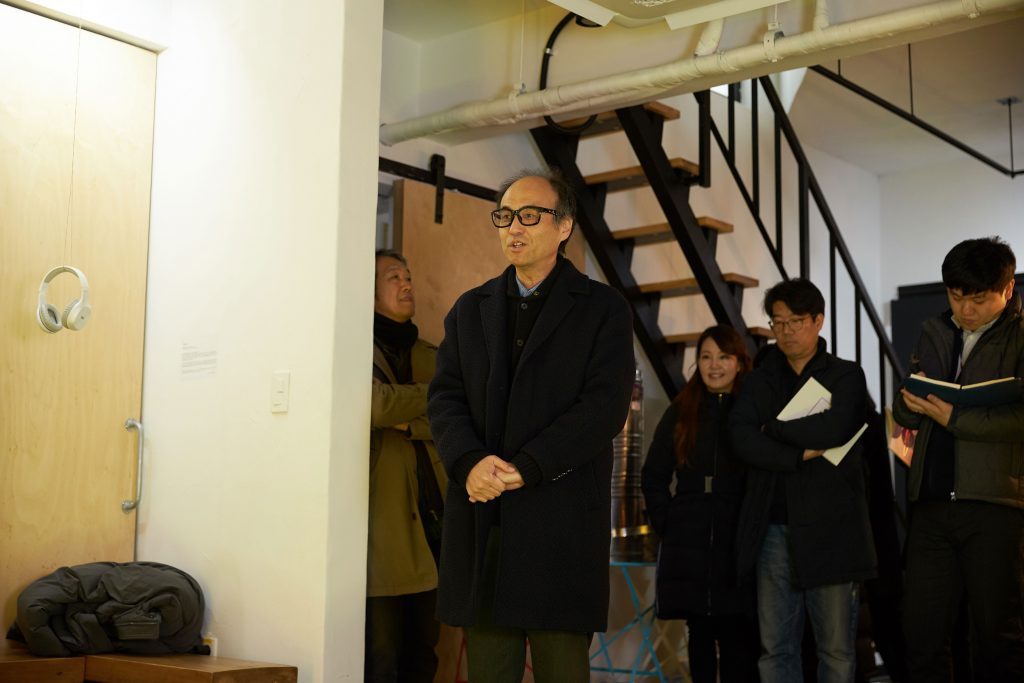 “I am grateful that you have made a lot of efforts to make a wonderful space,” said Professor Jaeweon Cho in the School of Urban and Environmental Engineering at UNIST, Director of Science Walden.

Infinity fSM (Feces Standard Money) is an important theme pursued by the Science Walden project. Infinity fSM started with a non-flush toilet. Here, the process of reprocessing the sides while minimizing the amount of water used is converted into biogas and becomes new energy. This energy can be used as a fuel for heating, hot water, etc., and its value goes back to the person who produced it.

Science Cabin is a science + arts convergence research center where artists help scientists understand this concept and represent it through scientific experiments, such as bio-energy production of feces. This space is also used as an exhibition hall, as well as a space for carrying out science-art convergence projects. Through the recent Science-Art Residency Project, held in November, artists Wongil Jeon and Seungkyun Lim carried out art projects, while staying at Science Cabin for a month. Three more artists will participate in the residency project in the upcoming January. 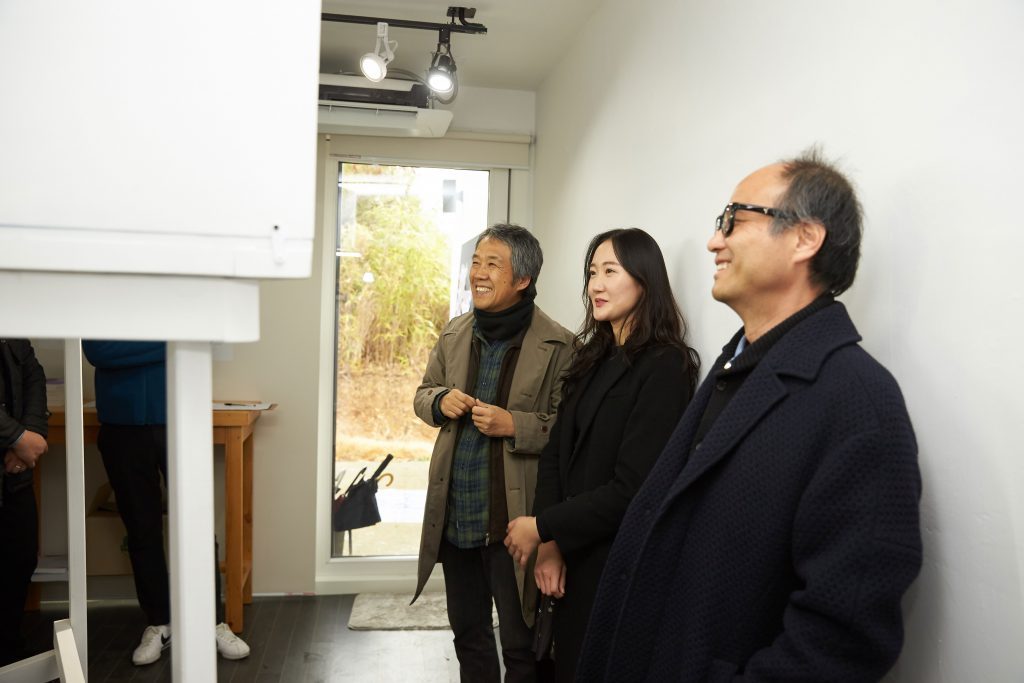 When visiting the exhibition, there are colorful canyons at the entrance of Science Cabin. Those oddly shaped canon layers represent our future, formed by piles of used plastic bottles and synthetic fabrics.

“The theme of this work can be seen as the Life Cycle of Clothes,” says Bitna Yoon. “In mapping out this work, I asked myself where the clothes in my wardrobe come from and how they end up.” She adds, “Artificial processes, such as manufacturing of synthetic fibers, washing them, and destroying them, once they are piled up, they can turn into naturalness in the distant future, I imagined.” 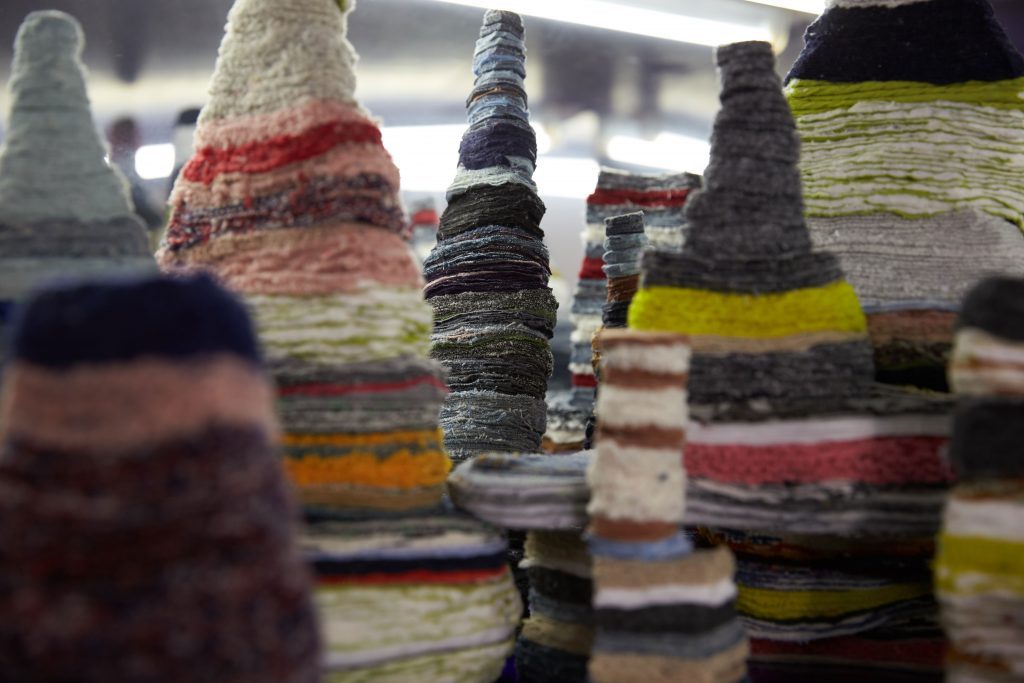 The oddly shaped canon layers, shown above represent our future, formed by piles of used plastic bottles and synthetic fibers.

Artist Jieun Gu has been involved in the Science Walden Project, two years ago. She also participated in the ‘Flowing Point’ exhibition, which was held in May of this year, as an organizer, and carried out the Convergence of Science and Art project. At that time, she pondered the meaning of ‘collaboration’ and ‘convergence’ and expressed through her work, titled ‘Flowing Islands’. There, she displayed a number of tubes that are connected and interpenetrate one another. Through this, she wanted to address “Convergence and interaction can only arise when they bunch up and contront each other.”

On the side of the membrane tower, there is an image work, entitled ‘Flowing Honey’. The honey that floats in water represents the value aring from the circulation and flow of water, as well as the growth of fSM (Feces Standard Money). 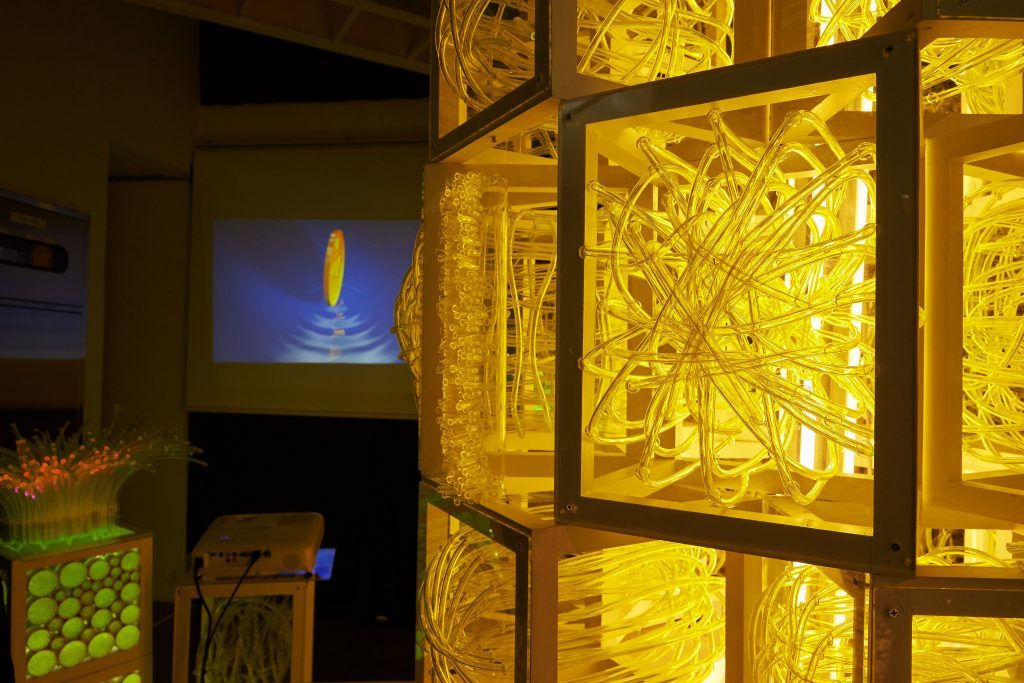 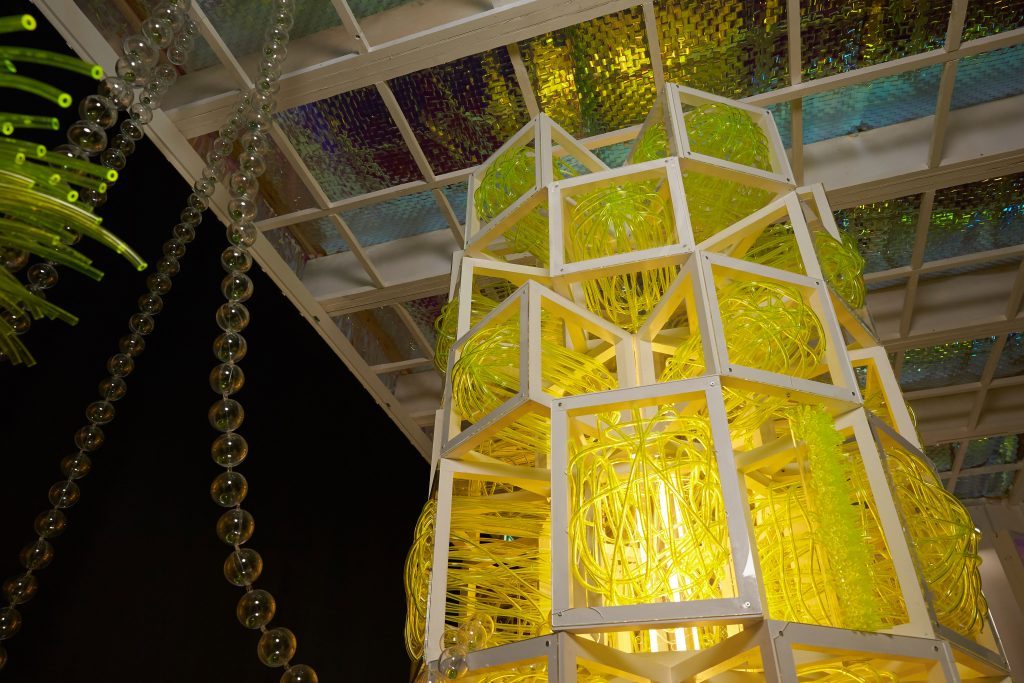 ‘Membrane Tower’ and ‘The Flow of Honey’ by Jieun Gu.

Hexagon is known for its efficient and complete structure. Science Walden’s currency, ‘Honey’ also comes from a hexagonal honeycomb. In addition, Sa-Wol-Dang Pavilion, which was the first project of Science Walden, is in the shape of a hexagon. The logo that represents the Science Walden Project is also hexagonal. Thus, many values that Science Walden aim to pursue collide and fuse within hexagons.

The work above, titled ‘Magic Castle’ where audiences can move and manipulate the interior design in their own creative ways, there is a constant stream of newness and convergence. That magic castle where anyone can make a change and bring values to life is Science Walden. 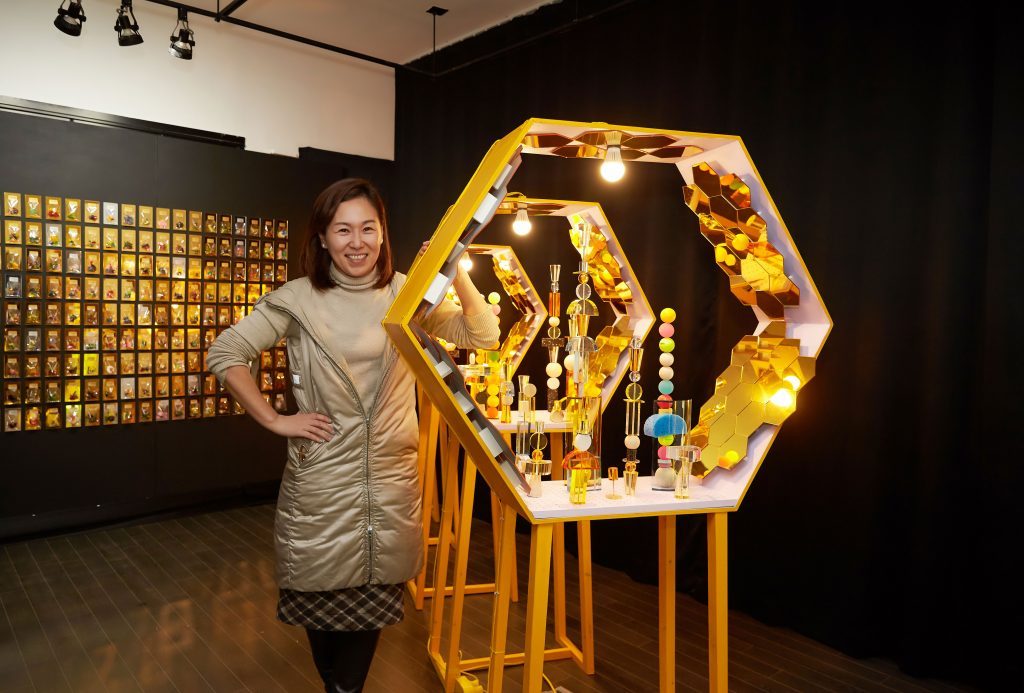 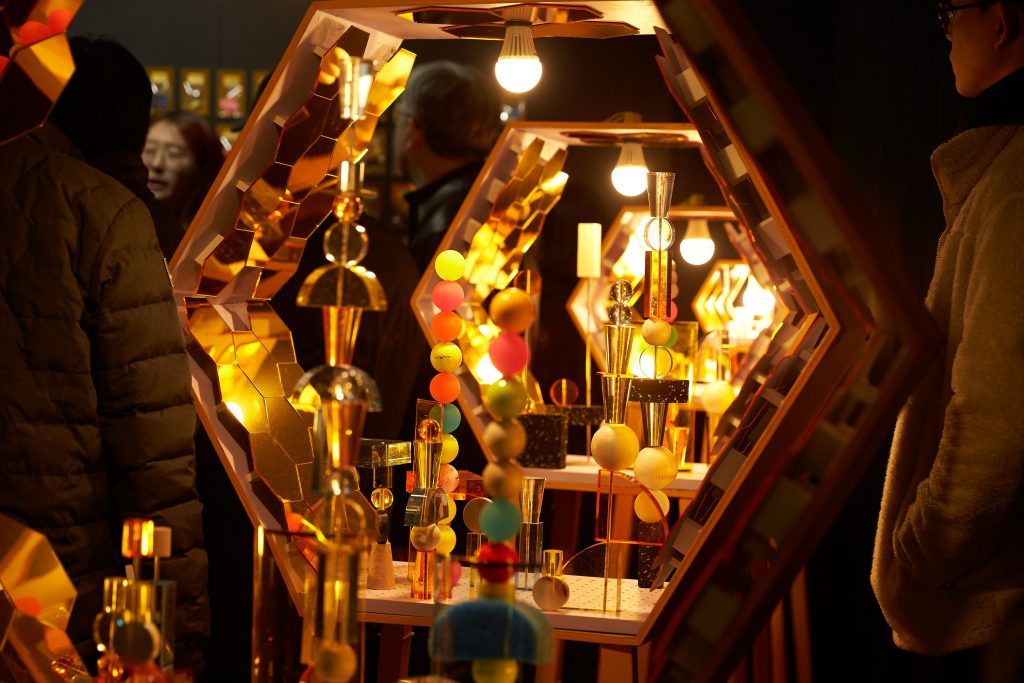 On the second floor, Science Cabin presents a short 3D film, entitled ‘Planned Garden’ by artist Seungjin Park. One focus of this video entails looking at the portrayal of negative aspects of modern society, such as insensitivity, heartless, force of habit, war, and scarcity of environmental resources.

In addition to the exhibition in Science Cabin’s second floor gallery, there is a PVC artwork by Jieun Gu and Michul Choi. Their work aims at presenting a cross section of today’s society, as well as the future Science Walden hopes for. The wave-like PVC films represent a solid, unchanging awareness of people in the modern world, as well as the the oil spills, floating on the water. But, at the same time, it also symbolizes the promise of unlimited opportunity and new hope for the weary citizens. 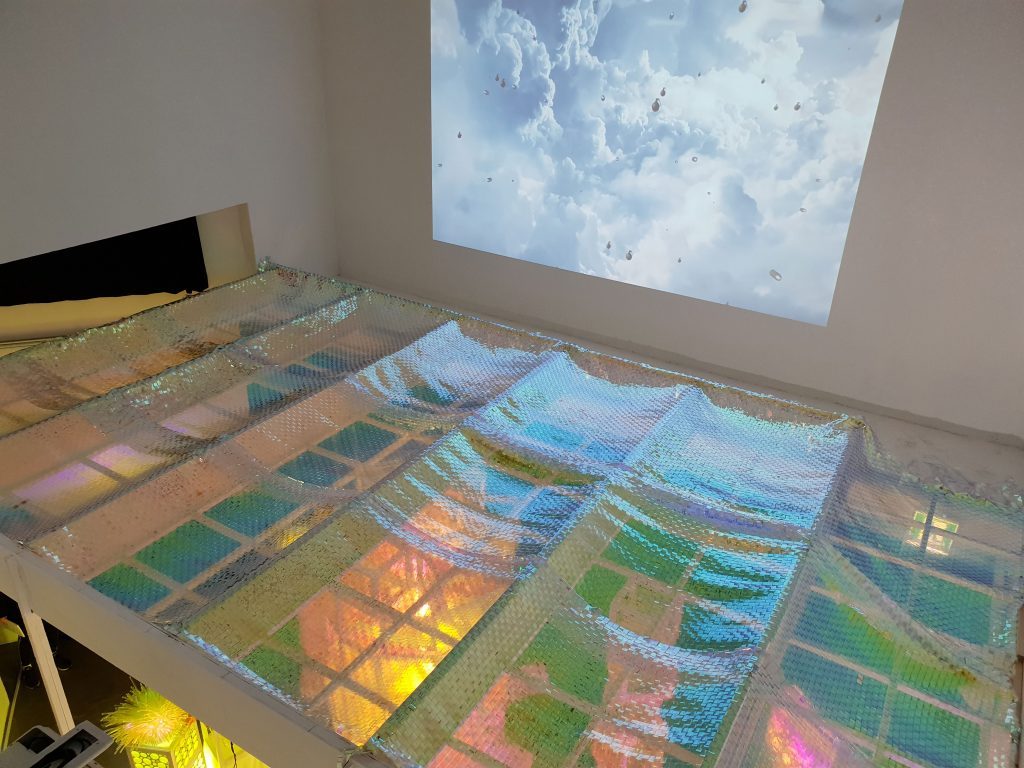 On the second floor of the exhibition, an image work by Seungjin Park and ‘PVC Aurora Wave’ by Jieun Gu and Michul Choi.

<‘Flushing away is not the end’ by Daehee Kim>

The work by Daehee Kim (School of Urban and Environmental Engineering, UNIST) included sounds around us. His question began with the meaning of ‘pollution’. People engage in social and productive activities they enjoy to find happiness and meaning in life. Yet, the majority of air pollution is the result of human activities. Our daily activities serve a greater purpose beyond the pleasure or satisfaction, then shouldn’t pollution be considered good?