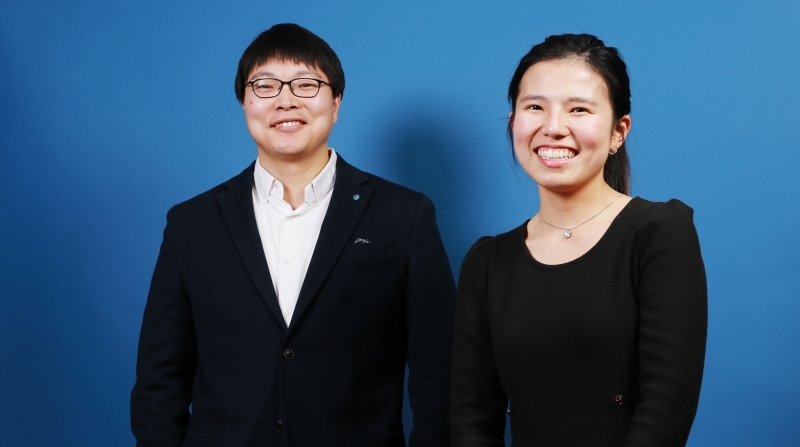 Lee Yeong Kim of Physics (right) and Prof. Bum Suk Zhao of Chemistry/Physics (left) are posing for a portrait.

A Step Toward Quantum State Selection of Non-polar Molecules

Paving the way for selecting a specific state of nonpolar molecules.

A recent study, affiliated with UNIST has reported a novel approach to get one step closer to separation of non-polar molecules in different rotational quantum states. This study has been conducted by a UNIST student, Lee Yeong Kim (Department of Physics) in collaboration with Xing San Sun (Department of Chemistry) of Seoul National University.

This is the first time in history a UNIST student to publish an article via Physical Review Letters, the world’s premier physics letter journal that publishes high-quality reports of significant and notable results in physics research.

“As the supervising professor of Ms. Lee Young Kim, I am excited for her to embark upon a new chapter in her life as this is certainly unusual for an undergraduate student to publish an article via Physical Review Letters,” says Prof. Bum Suk Zhao (Department of Chemistry/ Department of Physics). He continues by saying, “Without her strenuous efforts, this would have remained as a mere hypothesis.”

According to the team, separation of non-polar molecules in different rotational quantum states has been a notoriously difficult task compared to that of their polar counterparts, which can be utilized in extreme cases such as separation of spin isomers of non-polar molecules. This is because most experimental results have been analyzed with the average polarizability of all rotational states.

This is an important aspect in the study of molecules in that experimental evidences in this study clearly show that the velocity distribution of non-polar molecule can be significantly manipulated depending on their rotational states by pulsed optical standing waves.

Prof. Zhao states, “Our analysis based on the rotational state-dependent effective polarizability can therefore serve as a basis for developing a new technique of state selection for both polar and nonpolar molecules.”

Since the interaction between the polarizability of molecules and an electric field strongly affects the molecular motion, a certain rotational state can be isolated by choosing a proper electric field spatial distribution. As a first step toward rotational state selection, the research team dispersed carbon disulfide molecules with optical standing waves and analyzed the experimental results with the rotational-state-dependent polarizability.

The electric field of the optical standing wave disperses the molecules, according to their rotational quantum numbers J and M, which resulted in a structured transverse velocity distribution. Through this study, the team represented that analysis employing the state-dependent effective polarizability can reproduce the observed velocity distribution.

Future work in this area, according to the research team, includes the selection of a specific rotational state of non-polar molecules through the combination with the following state-of-the-art techniques, a pulsed supersonic expansion source and optical standing waves of a tunable velocity, which is in progress. Prof. Zhao states, He continues, “This, therefore, has paved a way for developing a new technique of state Selection for both polar and nonpolar molecules.”

The results of the study have been appeared in the November 27th issue of the journal, Physical Review Letters.