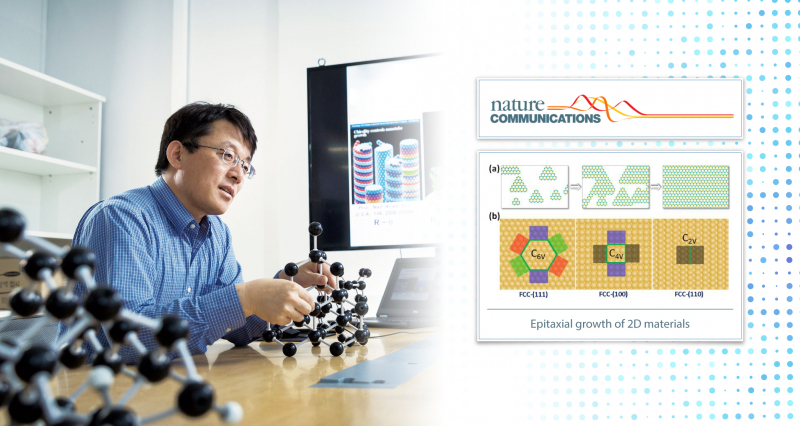 The work by Distinguished Professor Feng Ding and his colleagues from IBS CMCM at UNIST has been appeared in Nature Communications on November 17, 2020.

A Strategy Towards the Synthesis of Various 2D Materials

The work by Distinguished Professor Feng Ding has been appeared in Nature Communications on November 17, 2020. 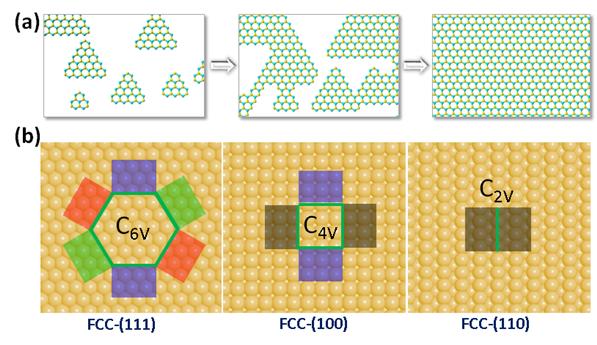 Recently, Distinguished Professor Feng Ding and his colleagues from the Center for Multidimensional Carbon Materials (CMCM), within the Institute for Basic Science (IBS) at UNIST, proposed a general strategy towards the epitaxial growth of various 2D single crystals—by using substrates with high index surfaces. In the study, the authors firstly considered the interaction between a 2D material and a substrate by using the state-of-the-art computational approach and they have confirmed that a 2D material always tends to align along a high symmetry direction of the substrate. While, if the substrate has a high symmetry, the 2D material may have a few equivalent alignments on the substrate, as have been broadly observed experimentally. As a consequence of the theory of 2D material’s epitaxial growth, the authors concluded that a 2D material may have only one preferential alignment on a substrate with low symmetry and they propose that the uniform alignments of a large number of 2D islands might be easily realized on substrates with low symmetry.

Based on the theory, the authors have shown a map of the equivalent alignment of various 2D materials on various substrates and, after careful comparison with existing experimental results, they have found that the theory agrees perfectly with most of them.

In most previous experimental studies, the commercially accessible high symmetry substrates, or substrates with low-index surfaces, are broadly used. While the authors suggest we should try a new class of substrates, namely substrates with high-index-surfaces, to realize the epitaxial growth of 2D single crystals (Figure 3). A high-index-surface generally has a large number of parallel atomic step edges and, during the 2D materials growth, these step edges can facility the nucleation and alignment of the 2D islands to ensure their uniformed alignments on the whole substrate. “Most previous experimental studies chose to use substrates with high symmetries, which are easily accessible in the market, while our theory showed that it is a wrong direction for the pursuing of 2D single crystals,” said Dr. Dong.

“We carefully compared with all the existing experimental results of 2D materials synthesis, and it is amazing that the simple theory agrees with all of them perfectly. So, the theory provides a general guideline for the synthesis of various 2D single crystals,” Professor Ding summarized “And with the guidance of the theory, the experimental scientists should be able to synthesize various 2D single crystals for the exciting applications soon.”

The findings of this research have been published in the online version of Nature Communications on November 17, 2020. This study has been supported by the Institute for Basic Science (IBS), South Korea.