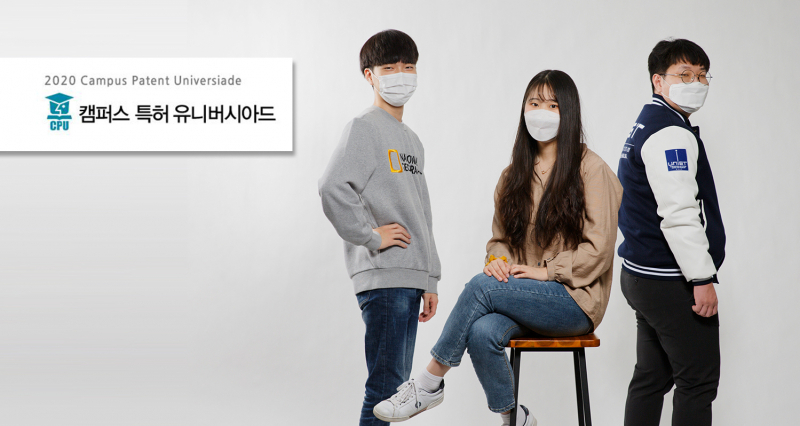 A team of UNIST students in the School of Liberal Arts has been honored with the excellence award at the 2020 Campus Patent Universiade Competition. From left are Beomsu Kim, Mina Kang, and Seonuk Kim.

A team of UNIST students in the School of Liberal Arts at UNIST has been honored at the 2020 CPU.

A team of UNIST students has been honored with the excellence award in the ‘Invention Commercialization Division’ at the 2020 Campus Patent Universiade Competition (CPU).

Hosted by the Korean Intellectual Property Office, the competition has been c0-organized by the National Academy of Engineering of Korea, the Korean Federation of Science and Technology Societies (KOFST), and the Korea Invention Promotion Association (KIPA).

The Campus Patent Universiade Competition aims to foster entrepreneurship at universities by educating students on industrial practices related to Intellectual Property (IP). The event stimulates students’ creativity and raises awareness of the need for IP management. Participants are asked to search and analyze relevant patents and related technologies on the subjects proposed by industry, and to set up R&D strategies for attaining new, patentable technologies.

The award-winning team consists of Seonuk Kim, Beomsu Kim, and Mina Kang in the School of Liberal Arts. They won the ‘Sponsoring Director/CEO Award’ in the ‘Invention Commercialization’ division, along with a prize money of approximately KRW 3 million. This award has been given to them for presenting the idea of the next-generation refrigerator that manages people’s health based on the patented technology, presented by various corporates.

The proposed smart refrigerator has various features to help users with their health and fitness. It first connects your wearable devices that monitor your nutritional information and BMI to the front display of the refrigerator. Based on such information, the users can observe their health conditions and manage their diets.

One noticeable privilege of this competition is that winners will be called to the sponsored corporates’ job interviews. In addition, they will be given the opportunity to be involved in the community, called the Young Intellectual Property Leader (YIPL), which is composed of the winners of past contests. The final results of the 2020 Campus Patent Universiade Competition were announced on October 27, 2020. The award ceremony is expected to be held on November 26, 2020.