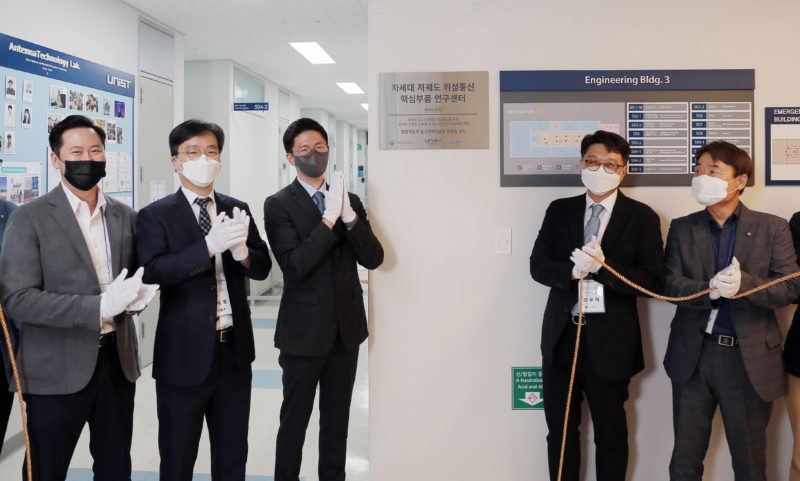 A ceremony was held in the Engineering Building of UNIST to commemorate the opening of Core RF/Power Components Research Center for Low-Orbit Next-Generation Satellites (LONGS). The ceremony has been attended by researchers and representatives of industries, universities, research institutes, and government, including Director General Woo-Hyuk Choi of Radio Policy Bureau at the Korean Ministry of Science and ICT (MSIT). Dean Jae-Young Sim in the College of Information and Biotechnology at UNIST is delivering welcome remarks at the ceremony.

Initiated in 2014, the UNIST Radio Research Center (RRC) is a research project, dedicated to the research and source technology development, as well as the cultivation of high-caliber professionals in the areas of radio waves and satellite communications. A total of 12 centers, including the RRC at UNIST, are currently being operated nationwide to carry out various research related to radio waves, such as intelligent antenna, intelligent radar, electromagnetic wave analysis, and radio-medical service. Through this, they have produced good progress to strengthen the overall capabilities of radio wave-applied industries over the last year. Some of those include 327 research personnel, 47 SCI-level papers, and 64 patent applications and registrations.

UNIST RRC, headed by Professor Gangil Byun in the Electrical Engineering at UNIST,  plans to train high-quality research personnel through the development of key components required for next-generation satellites. The center will receive about KRW 3.9 billion for the next eight years to carry out various projects, jointly with the Pusan National University, Pohang University of Science and Technology (POSTECH), DS Navcours Co.,Ltd., and Moasoft Co., Ltd. The center plans to develop core RF/power components for the low-orbit next-generation satellites, in particular for the active-phased array antenna (APAA) system of very low-orbit satellites (550 km below) and the active reflection system of low-orbit satellites (1,000 km above). Director Gangil Byun is presenting the roadmap for future research directions of RRC.

Attendees are listening to the future research directions of RRC at the opening ceremony of LONGS. Attendees at the opening ceremony of LONGS took a group photo.