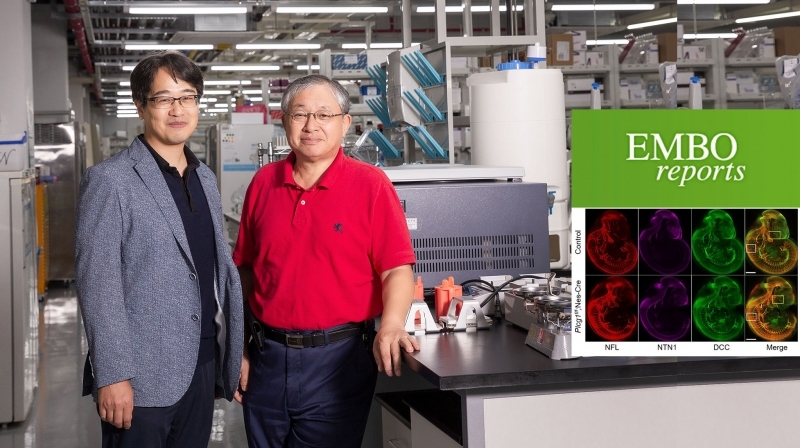 From left are Professor Du-Seock Kang from KAIST and Professor PannGhill Suh in the School of Life Sciences at UNIST.

Their findings have been published in EMBO Report on September 17, 2018.

A team of researchers, affiliated with UNIST, has discovered a key protein that serves as the basic element for the development of intracellular structure of nerve cells. This protein, known as PLCγ1, is particularly important in connecting the nerves, so that both the corpus callosum, which connects the cerebral cortex’s left and right hemispheres, and the dopaminergic nervous system to function properly.

This breakthrough has been led by Professor Pann-Ghill Suh in the School of Life Sciences at UNIST in collaboration with Research Professor Du-Seock Kang from Korea Advanced Institute of Science & Technology (KAIST). This study, which sets out to clarify the principle of neural network formation, is expected to help identify the underlying cause of neurological diseases and treat the condition. Their findings have been published in EMBO Report on September 17, 2018.

A typical brain has roughly 100 billion neurons. Each individual neurons can form thousands of links with other neurons. These connections, known as synapses, allow cells to rapidly share information, coordinate their activities, and achieve learning and memory. Breakdowns in those connections have been linked to neurological disorders, which include autism and Alzheimer’s disease, as well as decline of memory during normal aging.

“Scientists have been seeking answers to neurological disorders in neural connections,” Professor Suh. “In fact, when we examine the brains of those patients with Alzheimer’s disease, ADHD, and schizophrenia with Diffusion Tensor Imaging (DTI), there was a clear difference in their structural and functional neural networks.”

In this work, the research team found out the key factors that affect the development of the nervous system by observing the brains of PLCγ1‐deficient mouse embryos. PLCγ1 plays a pivotal role in regulating signal transduction pathways during development and it affects the formation of cranial nerve cells when destroyed. This results in the incomplete formation of neural networks. The study also revealed that PLCγ1 regulates the dynamics of the actin cytoskeleton, which determines the directional movement of axons, thereby inducing axons to grow toward their proper destinations.

“Our study shows how the process of dopaminergic neurons and corpus callosum development took place during neural development,” says Professor Suh. “Thus, it has many implications and may prove to be valuable in the treatment of a vast range of neurological disorders.”

Meanwhile, Professor Suh has been investigating, for the first time, the process for gene cloning, purification, and isolation of various phospholipase C (PLC) isozymes in the brain. Recently, he has identified the key role PLCγ1 plays in in forebrain excitatory neurons, as well as its role in nervous system development.