Home All News Community Contribution Bringing Science and Humanities Together 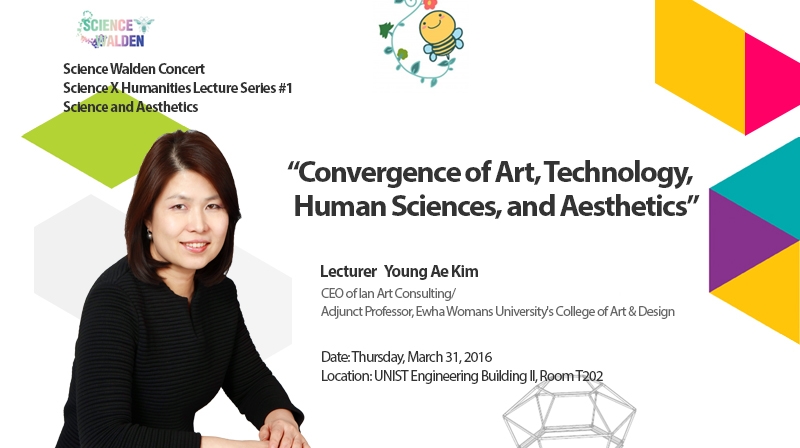 Bringing Science and Humanities Together

UNIST to hold "Science Walden Concert" for the public on Thursday, March 31, 2016.

On this upcoming Thursday, March 31, UNIST will launch Science + Humanities Lecture Series, as part of the 2016 Science Walden Concert.

Concert participants include contemporary artists and scholars from different fields, from the humanities to science and technology, who deal with similar concepts through different means. The first lecturer of this year’s Science Walden Concert is the CEO Young Ae Kim of Ian Art Consulting, presenting “How scientific research and technological innovation are becoming key to 21st-century aesthetics.”

Ms. Young Ae Kim, the CEO of Ian Art Consulting, is currently an adjunct professor of Art & Design at Ewha Womans University, where she contributes to the development of new practices in art, design, and communication. She also possesses vast experience in performing arts and over a period of many years, she has worked as an exhibition director, a director of Opera Gallary, as well as an invited researcher at Korea Culture & Tourism Institute.

This is also a joint project with the Art Center Navi, the Paju Typography Institute, the Korean Nature Artist’s Assocition Yatoo, and the Hankuk Engineering Consultant. It has been also selected as the 2015 Research Center Support Project, organized by the National Research Foundation of Korea and the Korean Ministry of Science, ICT and Future Planning (MSIP).